Writer Kate Washington was a 42-year-old with a bustling freelance career and two young daughters when her husband, Brad Buchanan, was diagnosed with a rare form of lymphoma that set off a series of health crises—including high-risk surgeries, life-threatening infections and temporary blindness—that left him permanently disabled.

Already carrying the mental load for her household, Washington was thrust, with no warning and scant preparation, into the role of caregiver for her spouse. The experience, which she writes about with intrepid candor and profuse empathy in her book, “Already Toast: Caregiving and Burnout in America,” left her physically and emotionally depleted and robbed of her individual identity.

Washington’s plunge into extreme caregiving brought into clear focus how our country’s policies, its culture and its tenuous systems of support have failed families on multiple levels. Weaving literary examples of caregiving throughout her prose, she makes a compelling case for fundamentally transforming how we do the important and necessary work of caring for one another. 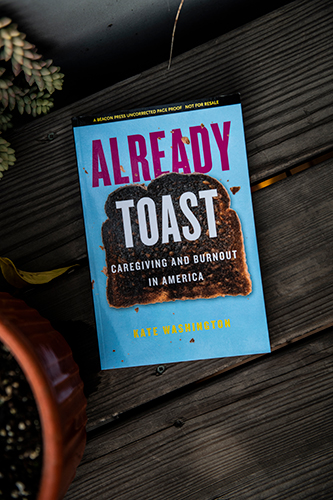 As your book opens, you write about how you were chided for not doing a better job with your self-care. Can you talk about the traps of self-care and why the incident stuck with you?
Often caregivers are told to do better at self-care. It’s really kind of a cop-out for providing adequate support and systemic care for all of us. We can’t put the burden right back on the caregiver when they’re already giving so much care. As I wrote about in the book, self-care kind of becomes another item on the to-do list. In the really raw and overextended and burnt-out state I was in when that incident took place, it felt not only like a criticism of me personally, but also it undermined my entire raison d’être aside from providing care for my husband. I’m a legitimate person with needs; I don’t need to take care of myself just because I’m taking care of somebody else.

You write a lot in the book about feeling invisible. In your words, “I felt, on every level, unseen in my life, even as I was holding together the lives of four people. The longer I acted as a caregiver, the angrier I found myself at that erasure.” How much of that invisibility do you think is tied to the gendered nature of caregiving?
I do think there is a gendered expectation of providing care. Of course, I don’t mean to erase the work of male caregivers, of whom there are many and very excellent ones. And, of course, I haven’t had the experience of being a male caregiver. But I did always feel that it was taken for granted that I would step up and do the caregiving, and that may not have been the case to the same extent if our genders were reversed. That’s more based on my experience having been a woman in the world than a comparative study. I think women are still expected to be the ones who step in and give care when nobody else is stepping in.

Was writing the book a way of being seen?
I am really hopeful that it will increase visibility, and not just for me. I hope it will increase visibility for unpaid family caregivers more broadly. I think the current discourse around the pandemic is helping make the crisis in care more visible. I tried to write the book that I would have wanted to help me feel seen at the time that I was going through this. It’s not a how-to book and it’s not a practical guide. My hope is that caregivers will be able to read this and see something of themselves in it, even though all caregiving situations are different.

Your book offers up some brutally honest stories about the anger and resentment you often felt as a caregiver, and how you were at times motivated more by duty than by love. Can you talk more about the taboo of feeling those emotions? How did you come to give yourself permission to air those feelings publicly?
Honestly, I don’t know how I gave myself that permission because I will confess that I occasionally have that feeling of, what have I said? Some of the material that eventually turned into the book started out as very private, ranty writings, almost like a diary. Later, I started feeling like I wanted to share them in a more considered form than they were originally. As I connected with other caregivers, I felt less alone in those emotions. It helped me feel less like it was a taboo. I think our society is very individualistic, and people end up very isolated in their nuclear family unit when it comes to caregiving and many other things. Breaking down those silos and those taboos can really help people feel less alone and get through harder things.

You weave literary examples of caregiving—everything from “Middlemarch” to “The Color Purple” to “Madeline”—seamlessly with your own story of caregiving. How did literature help you make meaning of what you were going through?
I think that’s partly interwoven with my husband’s and my relationship in general. We met when we were both grad students in literature, so it’s been a big part of our relationship overall, not just through his health crisis. I revisited a lot of old favorites during that time—I’ve leaned on literature for comfort reading for a lot of my life—and I started noticing that there were these interesting characters who were doing similar things or had similar feelings to what I had.

The first literary piece that really struck me and gave me the idea for weaving literature into what I did not yet know would be this book was the weird story of the character Leslie Moore in the “Anne of Green Gables” series. I had been a huge “Anne of Green Gables” fan as a kid. I went back and reread it, and it struck me at a time when I was really overwhelmed and struggling to see this woman in a completely different context who was trapped and was bitter. She’s often a resentful character, but she does her duty.

What have you told or will you tell your daughters about caregiving, particularly in light of the fact that they may be caring for you someday? What hopes and expectations do you have for them?
In some ways, I put that in the dedication in the book. I hope it will be easier for them. I do think they’ve gotten a pretty up-close picture of caregiving, and I see them having a lot of solicitude for Brad. They’ve clearly seen their father become more fragile over the years. Sometimes I worry that they’ve absorbed this idea that you have to give everything to the people you love, but on the other hand I don’t want them to walk away from it.

I think if I were to talk to them more, I would say to marshal the help, get a network together. I would hope that when the day comes for them to care for me, they would work together as well as bring in others, so that no single person would bear all the responsibility. I think forming networks of care is really critical for the relief of the individual caregiver.

In thinking about caregiving in the context of marriage, there’s nothing sexy about this intense kind of caregiving, in spite of some tender moments that can arise from it. Do you think it robs the couple of something?
I think extended or extreme or long-crisis or end-of-life caregiving is very hard on a marriage, even a rock-solid marriage. I don’t really address this in the book, but I do think that it’s part of a broader trend where we expect marriages to do much more work than anyone expected them to do in the past. Spouses are everything to each other: lifelong sexual partner, best friend, co-parent, partners in the often-complicated enterprise of running a household together, caregiver. All of these roles in one relationship is a lot to ask.

Certainly, romance takes a huge hit from caregiving. And it changes the power balance in a marriage. I don’t want to speak for Brad, but I don’t think he liked to feel less capable or physically weakened. I write in the book about how the brunt of family caregiving often falls on one person. That’s not only not good for the caregiver; it’s also not good for the patient. If the caregiver is burned out and frustrated and the relationship is frayed, that’s also really bad for the person who is ill or needs support. It’s just not emotionally freighted for a professional caregiver.

Is there anything you want to say to all the caregivers out there who are doing this important work, largely without reward or recognition?
Don’t be afraid to ask for and accept help. It’s very easy to lose sight of oneself. Remind yourself and others that you’re a person outside of caregiving. The crisis in care and the way caregiving functions in the U.S. right now is a really complex, systemic problem. We really need a wholesale rethinking of how we care for each other in this society. I think the pandemic has made extremely clear that we need a rethinking of how we approach care for each other and health care in general.

It’s not exceptional or strange to need care or to be a caregiver. Yet most people don’t expect it in a really concrete way. None of us think, “I’m going to have to administer IV medications.” Caregiving catches so many people off guard, and it’s really hard to be thrown into the deep end of this very emotionally fraught process. It’s scary and we don’t have enough provisions for supporting people who are caring for other people, including parents and caregivers of the disabled or the elderly. I think it’s a pretty urgent problem to solve.

The specialists who gave a boy a heart for life