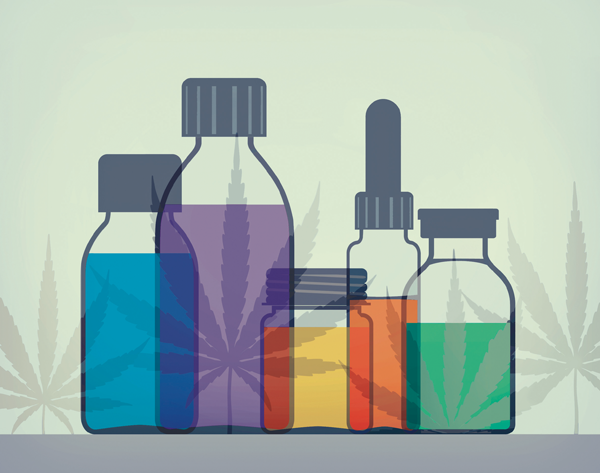 CBD, star of the new cannabis boom, is coming to a health product near you.

You can drink it. You can vape it. You can rub it on your skin. You can get it in oils, tinctures, caplets, tabs, lozenges and breath strips. It’s in lotions, balms, face serums, bath bombs, suppositories and skin patches. It’s being mixed into gummies, chocolates, ice cream, coffee, cookies, savory snacks and cocktails. You can get it in beauty shops, smoke shops, health spas, coffee shops, corner bodegas and natural food stores.

If you haven’t been properly introduced, meet cannabidiol, also known as CBD. CBD is not psychoactive (it won’t get you high), but its growth is enough to make economist heads spin. As this article was being researched, 2018 sales in the United States stood at more than $350 million, roughly double that of the previous year. Even Coca-Cola is reportedly working on a beverage that contains some CBD.

Why all the excitement?

The reason for this sudden popularity is the wide range of maladies it is reported to treat. Speculation about the medical potential of cannabis is nothing new. CBD was long overshadowed by buzzy ingredient and Seth Rogan co-star tetrahydrocannabinol, or THC. But what if we could get all the medical benefit without the purple haze?

“One of the biggest misconceptions is that people are coming to us looking to get high. The number one question we get is ‘How can I not get high?’” That’s Kimberly Cargile, executive director of A Therapeutic Alternative, a cannabis dispensary just west of McKinley Park. For 20 years, Cargile has been a yoga instructor, a reiki practitioner and natural medicine advocate. She’s also a patient rights activist, policy wonk and tour guide for government organizations from the CHP to the Department of Public Health, all trying to learn about this burgeoning industry.

“Cannabidiol is used by our patients for a number of things. They use it to reduce nerve pain, inflammation, spasms, seizures, anxiety, insomnia and nervous system overload, which is a symptom of autism,” says Cargile. “People want a nontoxic alternative to pharmaceuticals or alcohol and have a better quality of life.”

Here in California, anyone over 21 with a photo ID can visit a dispensary—no prescription necessary. In short, people are buying CBD, in person or online, without fear.

What do we know about it?

Cannabis prohibition made it near impossible to conduct proper research. However, relaxed regulations and dreams of a wonder drug have caused a surge of inquiry. Cannabis contains hundreds of compounds. Scientists aren’t actually sure how many. Many interact with receptors in the nervous system thought to play a role in regulating pain, sleep, mood, memory, appetite, and other cognitive and physical processes.

Both THC and CBD mimic the actions of naturally occurring brain chemicals. Their potential benefits are wide-ranging but not well understood. Both stimulate receptors in the nervous system, but not in the same way. Many advocates believe CBD works best in combination with even small amounts of THC. As such, many products are segmented by their CBD-to-THC ratio, ranging from 30:1 to 1:1. “I usually start people at 30:1 for those who haven’t used THC before,” says Cargile. “We want to cover their symptoms without a high if they don’t want one.”

But is it effective?

Getting to the bottom of that question can be maddening. Advocates cite a wide variety of studies supporting their claims. Institutional gatekeepers insist there is too little evidence to make a firm conclusion about most claims so far.

The one clear benefactor of CBD studies has been kids with seizures. In 2018, the FDA approved the CBD medication Epidiolex to treat forms of childhood epilepsy. Beyond that, citing proof gets more problematic. CBD’s usefulness as an anti-inflammatory is promising, but positive results so far have come mostly from animal studies. CBD may indeed be effective against anxiety. There was a famous study that found people with a fear of public speaking felt calmer after taking CBD. A 2017 study tried to see if CBD was good for improving sleep. Most subjects found no improvement, but with one intriguing exception: It helped those with chronic pain sleep better.

The U.S. National Library of Medicine lists 25 clinical studies involving CBD and its effects on pain. More are in the works. Many involve pain in people with advanced cancer, and while some show positive payoffs, others demonstrate that cannabis treatment doesn’t provide any more relief than a placebo.

Could it solve the opioid crisis?

Opioid overdose has killed more than 500,000 Americans since 2000—making it now more deadly than World War II. Yet it turns out states with medical marijuana laws had significantly fewer opioids prescribed and fewer fatalities. It seems many may have discovered on their own that cannabis, as a substitute or supplement, reduced their need for opioids. Double-blind studies indicate opioids and cannabinoids may work together to reduce pain better than either on their own. CBD probably won’t replace opioids, but by taking CBD (and/or THC) a patient may need only a very small dose of opioid medication to get the desired effect.

How much should one take?

As with most drugs, the amount you take matters. CBD dosing is still very much an open question, and the delivery system you choose is a major factor. For example, many prefer to take CBD orally, but the body doesn’t readily absorb it this way. At least 80 percent of the CBD you swallow will go straight into fat storage, inert, never to reach the brain. For reducing anxiety, one study of oral dosing found that 300 mg is the minimum effective oral dose. This is nowhere near what you find in most products. NuLeaf Naturals, a prominent online CBD seller, sells 240 mg of oil for about $38. There are 100 drops per bottle, each containing 2.4 mg, but you’d have to take the entire bottle and then some to even approach the dosage most likely to work. The study also suggested that, at least for anxiety, CBD has a “Goldilocks window” of effective dosing, with 300 mg having a measurable effect, but with both 100 mg and 900 mg having no effect. having zero effect,

Inhaling CBD oil with a vapor pen is far more efficient than swallowing, since it bypasses the digestive system. But how do you determine the right vaping dose based on a study of oral dosing? Some producers claim CBD has a cumulative effect and needs to be used regularly to produce a benefit. How does that factor in? As for topical treatments, we still know very little about how CBD is absorbed through the skin.

What do patients have to say?

Scientists may distrust anecdotal evidence, but there’s so much of it, it’s hard to dismiss. I found plenty just in my social network.

Michaela had been battling insomnia. For years, she’d get five hours of sleep or less, which led to hypertension. She says CBD dramatically improved her sleep, and after about two months of proper rest, her blood pressure dropped to a normal range. She also says CBD has relieved her periodic migraines. “Can’t believe I’d gone this long without it,” she says.

For decades, Merida has had episodic arthritis that affects different areas of her body, but particularly her hands. She’d take Tylenol, which did little to help. She couldn’t take traditional anti-inflammatories like Advil because of other health issues. She wouldn’t take opioids even if her doctor offered them. “I found myself in a bit of a no man’s land for pain relief,” says Merida. Her daughters suggested CBD and picked up a lotion with a minty smell. She found that, after a few days, it helped. Since then, Merida’s gone to the dispensary herself and discovered that her friends—women in their 70s and 80s—also use cannabis and CBD products to cope with chronic pain and insomnia.

It seems rude to suggest that someone’s benefit is from a placebo effect—as if they’ve been duped somehow. But it is worth bearing in mind that the placebo effect is well studied. It offers real benefits to people who experience it. There have been many trials where beneficial responses to a placebo were actually higher than with the treatment itself. One study found that placebos sometimes work even when the subject knows it’s a placebo.

How do I proceed sensibly?

If you’re thinking of trying CDB for whatever ails you, here are some tips on doing it right.

First, you may wish to check with your doctor, especially if you’re taking other medications. Research on drug interactions with CBD is in its infancy, but there is evidence it can cause serious problems for people taking certain classes of drugs, especially SSRIs (a group of antidepressants including Zoloft and Prozac).

Second, make sure you get what you think you’re getting. The FDA does not regulate CBD, but it recently tested several commercially available “CBD oils” and found some to contain no or barely any CBD. Many contained illegal quantities of THC. The best way to ensure truth in labeling is to shop at a California state-licensed dispensary. As of July 2018, all products sold in dispensaries must be tested not only for THC and CBD levels but also for potentially harmful substances such as pesticides, fungi and molds. Plus, if you go to a dispensary like A Therapeutic Alternative, you may find a knowledgeable consultant who can help you make a more informed choice.

Finally, be methodical. Try only one new medicine at a time, so that any effects or side effects can be attributed to the right one. Then, “start low and go slow.” Begin with the lowest dose, once daily and, if tolerated and necessary, the dose can be increased slowly and deliberately. Luckily, CBD has no known serious side effects, although some say it makes them drowsy, so maybe avoid operating heavy machinery your first time out. Caution is an important part of self-care.