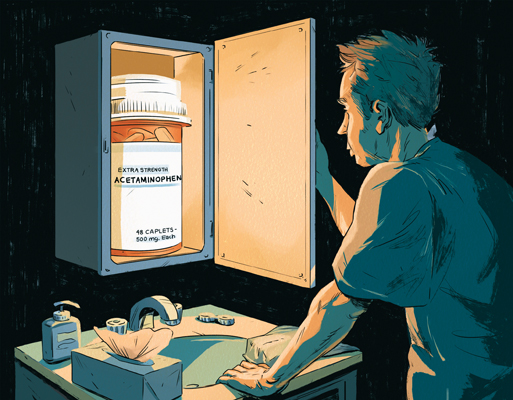 Let’s be honest. I overdose. You do, too, chances are. At this moment, my right heel is seriously messed up. Tendinitis. Just walking across the room is a struggle. So when I reach for the bottle of pain reliever, I consider the “maximum dose” a mere suggestion and pop an extra pill or two because I figure I’m a grown man and the directions must be conservative. Why not supersize? If two pills work, three will work better, goes the internal logic.

People often make questionable choices, especially when it comes to self-administered pain relief. Surveys show that about a quarter of Americans routinely take more over-the-counter pain relief pills than they are supposed to. This is usually free of consequence, so we don’t learn to act otherwise. But for a surprising number of Americans every year, it results in a visit to the ER. Sometimes without a return trip home.

They all contain acetaminophen.

It is “The Safe Choice” according to Tylenol maker McNeil Consumer Healthcare, a division of Johnson & Johnson. Given its effectiveness and reputation, perhaps it’s no surprise that it gets incorporated into so many multisymptom medications. This makes inadvertent overdosing a common occurrence.

When you’re laid out on the couch with the sniffles, you might reach for the NyQuil Cold & Flu Multi-Symptom Relief Liqui-Caps, which contain 325 mg of acetaminophen. An hour or two later, you still have a headache, so you take some Extra Strength Tylenol, which contains 500 mg of acetaminophen. And maybe, just maybe, you take that extra pill or two in both instances. And you do that a few times a day over the course of a multiday flu. It’s really easy to double dose, and not terribly hard to triple dose.

But here’s the thing. Acetaminophen has an excellent safety record at recommended doses, but it has a remarkably narrow margin between a safe dose and a toxic one. Federal data show acetaminophen as the cause of as many as 78,000 emergency room visits and 33,000 hospitalizations each year. It is the leading cause of acute liver failure. National poison control data link acetaminophen with more deaths than any other over-the-counter drug. Many victims are children whose bodies are particularly sensitive to big mistakes.

Taken over several days, as little as 25 percent above the maximum daily dose—or just two additional extra-strength pills a day—has been reported to cause liver damage, according to the FDA. Taken all at once, a little less than four times the maximum daily dose can kill you. About 150 Americans die each year by accidentally taking too much of “The drug that American hospitals trust the most.”

You might have assumed this level of toxicity is relegated to hard-core opioid drugs. Well, here’s a kicker for you. A long list of prescription opioid painkillers, such as Norco and Vicodin HP, also contain (wait for it) a large dose of acetaminophen. You could be an addict of the poppy but be poisoned by the generic Tylenol lumped in with it. In 2016, the American Society of Addiction Medicine estimated that 2 million Americans had a substance use disorder involving prescription pain relievers.

You may be thinking, “Hey, I’m not addicted to painkillers. I am a responsible person who always reads the label. Let’s drink to celebrate!” Sorry, but here’s another worry. If you are a regular consumer of acetaminophen and a light or moderate consumer of alcohol, your risk of liver and kidney damage increases markedly. A 2013 study of 10,000 adults found that light and moderate drinkers who also take acetaminophen more than double their risk of kidney disease. Even when participants had only small doses of acetaminophen, kidney disease soared an average of 123 percent.

Why is acetaminophen so dangerous? Most of it is safely processed and passed in urine, but it all comes down to one bottleneck in the liver’s ability to remove a potentially toxic byproduct known as NAPQI. At recommended doses, the liver is able to neutralize NAPQI produced during metabolism of the drug, but in the case of an overdose, NAPQI builds up to dangerous levels, obstructs vital functions and eventually destroys liver cells.

Here’s another wicked twist. In one respect, it’s easier to kill yourself accidentally than it is intentionally. That’s because the antidote to acetaminophen poisoning is effective. If a loved one is found and brought to the hospital within eight hours of the dose, chances are they can be saved. However, for someone who’s been overdosing over the course of several days, they may not even be aware there’s a problem because the symptoms of acetaminophen poisoning are similar to the cold and flu symptoms it’s being taken for. In that scenario, by the time a person realizes they’re in trouble, the antidote is no longer an effective treatment.

Acetaminophen was developed in 1955 as an alternative to aspirin, which was known to be effective at pain relief but hard on the stomach. Despite acetaminophen’s official safety profifle, many experts had concerns early on. In the medical journal The Lancet, a 1975 editorial proclaimed that if acetaminophen were discovered “today,” it would not be approved for over-the-counter use. In 1997, The New England Journal of Medicine published a study showing that acetaminophen was the leading cause of acute liver failure at Parkland Memorial Hospital in Dallas, despite the drug’s “apparent overall safety.”

Today, acetaminophen is one of the nation’s most used drugs. In 2009, more than 27 billion doses were sold.

Now that I’ve unloaded some high-grade alarmism on you, let’s take a deep breath and review the primary message. Acetaminophen is safe and effective when used as directed. Donald Miles, M.D., an urgent care physician with Dignity Health, puts it this way: “What I usually tell people is that this is not a benign drug. It has potential problems. We have to be careful, as with any other medication. I always tell them never take more than what is recommended,” says Miles. “If taken as directed, either by your primary care physician or the label on the package, you’re much less likely to have any problems. It’s a drug with a strong safety record that will do what it’s supposed to do.”

As a tippler and occasional Tylenol taker, I had to ask the doctor if it’s possible my liver or kidneys have been damaged and I don’t know it. He reassures me it’s unlikely sporadic doses and the occasional alcoholic beverage would result in long-term damage. Nevertheless, he issues a precaution beyond the standard warning label.

“Several years ago, the FDA said people should not be taking maximum strength, because of the potential for problems, so we have been recommending regular strength Tylenol,” says Miles. “Avoid the ‘extra-strength’ doses.”

Of course, my interpretation of that advice is “Maybe go with ibuprofen instead. It might upset your stomach but probably won’t shut down your liver.”

Do you remember the Tylenol Cyanide Scare? In 1982, a series of poisoning deaths resulted from drug tampering in the Chicago area. The victims had all taken Tylenol-branded acetaminophen capsules that had been laced with potassium cyanide. Seven people died in the original poisonings, with several more in copycat crimes. It was a terrible and high profile incident, with a somewhat famous conclusion. Within a week, McNeil pulled 31 million bottles of tablets back from retailers, making it one of the first major product recalls in American history. It would eventually become one of the most frequently taught lessons in crisis management discussed in every MBA program on the planet. It ultimately positioned Tylenol as the paragon of corporate responsibility in the public eye. But McNeil’s record of responsibility is a bit murkier when closely scrutinized. Although it has taken some steps to protect consumers, including the launch of a “Know Your Dose” public awareness campaign, an in-depth 2013 report by ProPublica revealed McNeil had repeatedly opposed FDA safety warnings, dosage restrictions and other measures meant to safeguard users of the drug.

But making a boogeyman out of a pharmaceutical company is a dull oversimplification. What’s really puzzling is that even when people read and understand warning labels, they still make bad decisions. Consumer research conducted in 2015 by a team of professors from California State University and University of California showed that most adults (OK, adults like me) simply ignored warning labels and assumed taking high doses of over-the-counter drugs was risk-free.

Jesse Catlin, Ph.D., is an assistant professor of marketing at Sacramento State and one of the study’s three co-authors. He explains that the problem seems to come down to two human miscalculations.

“Most people refer to drugs by their brand name. Tylenol. NyQuil. Motrin. Advil,” says Catlin. “It could be that some people just don’t know what’s in the drug.” And yet lack of awareness of the active ingredient did not fully explain their behavior. “Even when people explicitly knew the same active ingredient was in two different medications, they didn’t seem to think that was a problem. So that led us to talk about what we call ‘the naive belief’ that over-the-counter meds are basically risk-free even when people don’t use them properly.”

So what is the public-health solution here? It’s hard to fi nd an easy answer. The research conducted by Catlin and his team looked specifically at whether bright-red warning icons or packaging that clearly says, “This contains acetaminophen” would change behavior. It did not.

“Our study suggested we need to go a little bit further to dispel the myth that these things can’t be harmful if you misuse them,” says Catlin. “It seemed we were able to move the needle a bit when we gave people information that not only does this contain acetaminophen, or any other active ingredient, but we specifically include information that double dosing isn’t necessarily a good idea.”

I don’t know about you, but I’ve learned my lesson here. I’ve been converted. I swear from now on I will read the directions. I will stick to the guidelines. Pain is no fun, but it sure beats a trip to the emergency room.