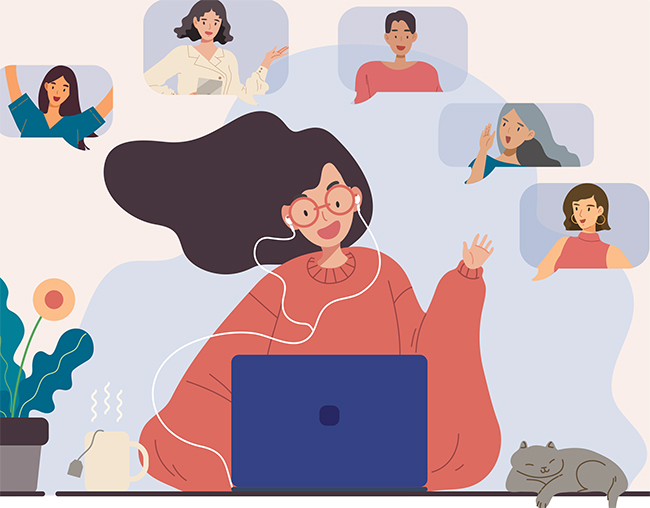 Somewhere up in heaven my dad is smiling.

COVID-19 wreaked much havoc on our world.

It also brought me closer to my family scattered across the country.

Toward the end of March, soon after stay-at-home/shelter-in-place mandates went into effect across much of the United States, my cousin Joanie emailed several of us suggesting we meet up on Google Hangouts, Google’s version of Zoom. So every Sunday for nearly two months, six to 12 cousins/nieces/nephews/aunts/uncles/parents/children, depending upon the relationship, connected for an hour or two. The group consisted mostly of women, though my cousins Rob, Tommy, Timmy and Thom often joined in, too. Our ages ranged from 20-something to 60+. Most resided back east—New York, Connecticut, Massachusetts, West Virginia, Vermont and North Carolina—with me in California.

The universal theme and probably the impetus for the meetups early on were, not surprisingly, COVID-19 and its repercussions: What restrictions were taking place in our necks of the woods? Who was having luck finding toilet paper or, a few weeks later, yeast to bake bread? Had anyone in the family gotten sick with COVID-19? (Six and counting.) We kept up to date on the health of Tommy and Martha who, at ages 89 and 90 respectively, were the oldest living among our clan, their remaining living son Tommy caring for them in between caring for his own household, which included his partner, Joe, and two cats. All four humans contracted and survived COVID. (The felines were never tested.) We talked about vacations postponed or canceled. One Sunday in April, Rob and his wife, Alex, showed up on the call dressed for an evening out on the town in the Dominican Republic ,where they would have been had COVID not shut down their vacation plans. We commiserated over hair that needed to be cut and roots in dire need of a dye job and shared the challenges—and perks—of teleworking. Life happened while we were forced to stay home: a baby was born; a father died.

As the new normal became, well, normal, conversations morphed from talking about the coronavirus to talking about everyday life. They always included memories. How Peggy and Patti used to scare younger cousin Carla during sleepovers. The time Paula and Carla’s mom called Paula frantically because she could not find the $15,000 she had stashed in her house. The time Patti got lost on her way from LaGuardia Airport, ending up by happenstance on her aunts’ block in Astoria Queens and, in true family fashion, stopped in for a visit. Sometimes I could take part in the memories but most times I just listened, raptured, listening to a jigsaw puzzle of my family history being pieced together.

The song says “I Left My Heart in San Francisco,” but Dad’s song could have easily been “I Left My Heart in New York City.” Dad persuaded my mom, his second wife, to move to California from New York shortly after they were married in 1966 so that he could be closer to his three sons from his first marriage. The move, though warranted and well intentioned, took him away from the close-knit family with whom he’d spent the first 43 years of his life.

My dad was one of six siblings. His oldest sister, Nita, was 23 years older than him; his second oldest sister, Josie, was 19 years older, followed by Anne, who was 10 years older. Of the six siblings, five had children, with Aunt Nita the most prolific, bearing more than seven children. (Not all lived to adulthood.) Because of the age difference, many of Dad’s nieces and nephews were his contemporaries. I confess that I am sometimes blurry about where each person fits into the family. Except this: I know that if I am uncertain, then their lineage connects them with Nita. Still, when Joanie emailed us copies of our family tree, I studied it like someone might study a map before venturing out on a cross-country trip, following the lines connecting family member to family member and, in turn, connecting the dots of my family.

Family was important to Dad, and he regretted that I, having been born and raised in California, had missed out on the closeness of the people he so enjoyed as a young man. Family picnics could attract 80-some people; summer barbecues were commonplace; and the basement of my Aunt Josie and Aunt Anne’s house on Long Island (Josie, a young widow, lived with Anne, who never married) was the hotbed of activity on Christmas Eve and New Year’s Eve. Wherever family gathered you could be certain of three things: They were dining on Aunt Josie’s famous pizza and chicken, they were playing cards, and they were shooting the breeze.

I may have missed out on most of those family picnics, barbecues and basement visits, minus a few family trips back east. However, I can’t help but think that these pandemic calls are our modern-day versions of those events, minus my Aunt Josie’s pizza and the card games. The content has changed, but the themes—what’s going on in the world today accented by memories of “long ago”—remain universal.

I am a firm believer that if you can take something positive from a negative situation, you must. That is a gift. These calls—which, now that restrictions have eased, have dwindled to once or twice a month—are the gift that COVID brought me.

I look forward to the day, when this virus is under control and travel restrictions are lifted, that I can see my family, all of whom I’ve gotten to know better via these calls and a few whom I’ve met for the first time because of them. I will hug them tighter; the I love yous will be even more sincere. I’ll think of my dad smiling from above saying, “I’m sorry you experienced this time in history, but I’m glad it brought you closer to family.”