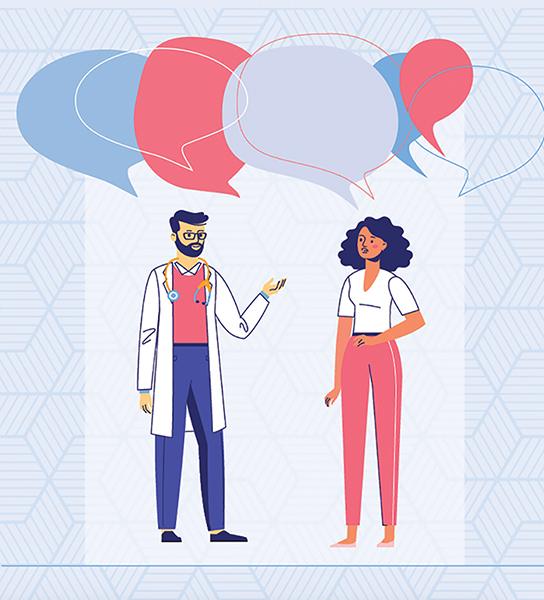 A few months ago, when an internal medicine vet called to discuss the results of our sick kitty’s ultrasound, I put my cell on speaker phone so my boyfriend Paul and I could both participate, conference-style. After we exchanged perfunctory hellos, the doctor plunged into the clinical findings. About two sentences in, when he mentioned “reactive lymphocytes,” Paul promptly stood up, mouthed, “I don’t know what the F he’s talking about,” and walked away. The call continued for another 15 minutes, with me taking copious notes and attempting to process the information so I could try to ask some pertinent questions. Paul stood nearby, half-listening, saying nothing, and occasionally shooting me a quizzical look.

Most of us have likely had similar communication bungles with our medical providers, leading to the $6 million question: How can doctors and patients declutter the dialogue and build better relationships? The unique challenges ushered in by COVID-19, notably an increased reliance on telehealth, adds yet another layer to that question: How can we partner effectively when the pandemic pushes us physically apart?

Effective doctor-patient communication has been shown to improve patient outcomes, making it one of the most critical aspects of successful health care. But it’s a two-way street, full of obstacles and some uniquely gnarly twists.

One of the biggest and most obvious issues: short appointment times. How much good communication can happen in 15 or 20 minutes?

A lot, actually—as long as you prepare in advance, says Anthony Jerant, M.D., a family medicine physician and chair and professor of the UC Davis Department of Family and Community Medicine. Physician-patient communication is a pet topic of Jerant’s: He’s conducted research about it and has also taught medical interviewing and communication techniques to UC Davis med students in such courses as Doctoring 1.

It may not sound revelatory, but the simple act of making a list prior to a medical appointment can make a huge difference, Jerant says. “Think ahead of time, make a list, prioritize the top two or three items, and know that you probably won’t be able to get through more than three in a single visit,” he suggests. This strategy works well for everyone, he says, “but especially those who tend to get flustered. Physicians can be intimidating for some people.” Doctors also need to do their prep work, Jerant says, such as closely reviewing patient charts prior to appointments. Modern technology, including electronic medical records, has vastly simplified this task, he notes.

Making that list (and checking it twice) also helps to address the common issue of mismatched doctor-patient expectations, says Kelly Herbelin-Farrar, M.D., a family medicine physician for Sutter Medical Group in Sacramento. She should know: She is a clinician communication coach and co-facilitates a class, The Art of Communicating With Patients, for Sutter clinicians. “When patients and clinicians don’t feel like they’re connecting, it’s often because there’s been a mismatch of expectations,” she says. If a patient comes to an appointment with a list of items (something Herbelin-Farrar says she loves, and the longer the list, the better), sometimes the simple question “What are you most worried about right now?” can help to clarify priorities, she says. Asking such questions also helps to demonstrate empathy for patients, which can sometimes be challenging for doctors, she finds.

“Physicians are problem solvers,” she says. “When people come in with their problems, and we’re listening and calculating and thinking about how to help them, clinicians don’t always know how best to express their empathy. Often we’re so ready to just jump in and tell them all the things we can do to help them, when really they just need to know in that moment that we’ve heard them.”

Another classic conundrum in doctor-patient communication is the one illustrated at the outset of this article. “Medical mumbo jumbo,” as one friend calls it, flies over the heads of many patients, leading to misunderstandings and frustration. But this can be tricky terrain for doctors, too, says Jerant, as patients have varying levels of what he calls “health literacy.”

“General literacy doesn’t necessarily mean health literacy,” he says. “We’ve been taught not to make any assumptions.” For that reason, Jerant says, he tries to explain things to everyone in the same way, and also takes care not to be condescending. To gauge health literacy, he finds it’s helpful to ask a patient to tell him what they know about the condition. “You’ll get a huge range of answers,” he says. If the diagnosis is cancer, for example, one patient might say, “It’s a death sentence,” while another says, “I believe it’s treatable.”

Showing, not telling, is also a powerful way to communicate with patients, says Christine Braid, D.O., a family medicine physician for Mercy Medical Group in Citrus Heights. “I’m not the best artist in the world, but I’ve been known to draw serotonin receptors, lipids, cholesterol, diaphragms, lungs and other things to educate patients and to help things make sense for them,” she says. As Dignity Health’s medical director of virtual–care services, Braid has recently expanded that “show and tell” approach to the virtual world, with promising results.

“With virtual patient visits, I can screen share so we can look at X-ray films together, for example,” she says. “I can even draw on it to show them what I’m looking at.”

Another advantage of virtual visits, says UCD’s Jerant, is the laserlike focus on talking. “Since there’s not a physical exam happening during a video visit, you spend all your time talking, which works quite well for the communication part,” he says. “The visits are more focused, and I think that’s one of the reasons doctors like it.”

Sutter’s Herbelin-Farrar has found video visits “more or less amazingly positive, especially for our seniors,” she says. “Right now, of course, many of them are staying home most of the time, and some have a hard time with transportation, so they feel really grateful being able to do a video visit. You can see them radiate with joy when we’re able to connect.”

But the physical distance also comes with a cost. “One of the things that’s a real challenge right now is that the way we express empathy or connection is through human touch—a handshake when we meet someone for the first time, for example,” says Herbelin-Farrar. But pandemic protocol has, sadly, changed all that. “In my clinic, I’m not supposed to touch you anymore,” she says. “So a hand on your shoulder is not something I can do when you’re really hurting. And you can’t see my facial expressions as well behind my glasses, my face shield and my mask.”

Braid concurs. “That’s been one of the difficult things about COVID,” she says. “I can’t put my hand on a patient’s hand when we’re having a ‘moment.’”

But by far the biggest bugaboo for virtual visits is—you guessed it—technology, which can be unreliable (ya think?) and can also trip up new users.

“Not everyone is being able to get through [on video],” says Herbelin-Farrar. While she admits this can be “really frustrating” for end users, she’s optimistic the technology will get easier for everyone in time.

Braid believes the success of medical video visits rests partly with the physician. “A lot has to do with the energy of the physician doing it,” she says. Communicating with patients in advance to outline expectations and provide technical guidance is something she and her team do routinely, she says, and it makes a big difference.

But when technology fails for whatever reason, a phone appointment—though not ideal—is the next option. “Phone isn’t as good as video simply because you can’t see the person,” says Jerant. “People react differently to the phone versus video visits. I think you don’t see as much of a payoff in terms of human interaction on the phone, and most people just don’t want to stay on the phone for as long.”

Many argue that nothing can replace the old-fashioned, face-to-face office visit. But flawed though they may be, virtual visits allow doctors to connect with patients wherever they are—a plus anytime, but especially in pandemic times.

What else can patients and doctors do to ease and improve communication?

Braid asks that patients be honest.

“If you feel your doctors aren’t communicating with you effectively, let them know,” she says. Don’t be afraid to admit when you’re confused, “because they may think they’re being super clear,” she says. “Sometimes doctors don’t know what they don’t know.”

On the flip side, some doctors may be frustrated by patients who use Google to self-diagnose or brainstorm treatment plans. Jerant, however, sees this as a good thing—with one caveat.

“I think it’s generally a great thing for people to do their own research,” he says. “I’m in the camp that the more information people have, the better.” But please stay open to what the doctor has to say, he asks. “As long as people are flexible and open to listening to the physician, as long as they don’t come in with a fixed mindset, it’s all good.”

Patients feel the same way, in reverse. They, too, want to be heard. “Many of us have enough medical knowledge that we can engage with doctors, and not all doctors like it,” says my pal Denise. “Several times I’ve cured myself, and when I told the doctor what I did, they dismissed it, saying things like, ‘Whatever works.’”

As with all relationships, the success of a physician-patient partnership pivots on both parties. But if it’s not a love match, don’t be afraid to move on.