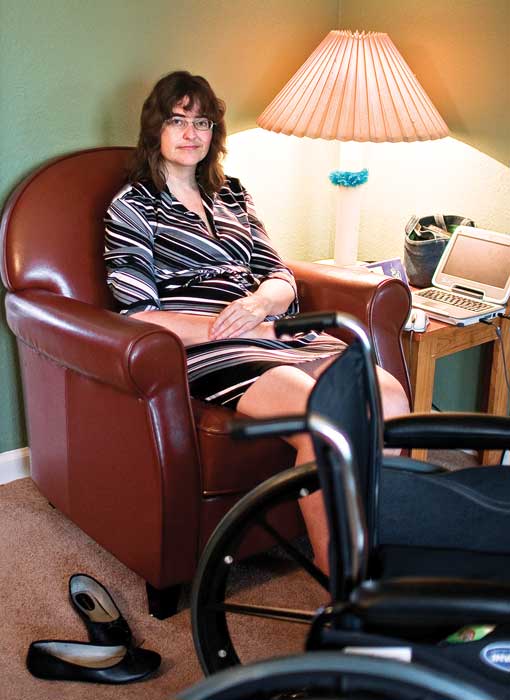 It doesn’t seem like such a shock when Grandpa dies of a stroke at 80.
But when you talk to someone like Suzanne Aymeric, who was only 43 this past December when she suffered a stroke that initially rendered her unable to move her right side or even speak, it just doesn’t seem right.
Before the stroke, Aymeric was healthy and fit—a marathon runner and busy working mom. Though she
had slightly elevated cholesterol and also was taking birth-control pills, a known risk factor for stroke, she was neither obese nor diabetic—the deadly duo to blame for many strokes in young people, according to experts interviewed for this article.
Instead, Aymeric’s stroke was attri-buted to—are you ready for this?—a sneeze.
How could this happen? According to neurologist Alan Shatzel, D.O., of Mercy Medical Group, Aymeric’s sneeze led to a chain reaction: It tore her carotid (the main artery in the neck), resulting in a blood clot that broke loose and found its way to the left side of her brain, blocking blood flow and causing extensive damage. Spontaneous carotid dissection is the medical term for it, and sneezing is just one of the events that can bring it on: Yoga, chiropractic manipulation and other actions that twist, rotate or extend the neck also  have been implicated.
The morning after Aymeric’s sneeze, she woke up “and couldn’t feel anything on the right side of my body,” as she describes it, and went to the hospital. Unfortunately, the time lapse was critical, says Shatzel. “If stroke symptoms are recognized early and people affected by strokes arrive at a certified stroke center, then treatments are available,” he says. Once blood flow is interrupted to the brain, it only takes minutes, he says, for brain cells to begin to die.
After intensive rehab, Aymeric has made big strides. She can move her arms again. She has regained the ability to speak, though finding the words doesn’t come easy. But she was still in a wheelchair at the time of this writing, and though her rehab doctor remained cautiously optimistic, her story—like that of rocker Bret Michaels, who suffered a stroke in April at age 47—brings a chilling reminder that strokes can happen years before one’s AARP membership kicks in.

Why More Strokes?
Aymeric’s story may be atypical, but some research suggests a troubling new trend is under way. Strokes are on the rise in the 20–45 age group, according to a study of patients in the Greater Cincinnati/Northern Kentucky region, with the incidence jumping from 4.5 percent in 1993–94 to 7.3 percent in 2005. In another recent study, researchers at Washington University School of Medicine found more than one-quarter of 7,740 stroke patients at a St. Louis hospital were younger than 55.
No such data appears to exist for the Sacramento region. But, anecdotally, local experts say the trend appears to be real.
“I’d say within the past two years,we’ve been seeing more [stroke] patients below 50—even in their 30s,” says Aymeric’s rehab doctor and Mercy’s medical director of rehabilitation services, Albert Hwang, M.D. The youngest? 34.
There was a time when doctors would immediately think congenital abnormality when a young person presented with stroke, Hwang says. But, increasingly, he says, “We run the tests and come up with no abnormalities.” That means looking for other reasons—and in the Sacramento region, one of those reasons is meth, notes Richard Atkinson, M.D.
“We’re seeing strokes as a side effect of the methamphetamine epidemic, especially in the younger population,” says Atkinson, a neurologist and stroke program director at Sutter Medical Center.
Ethnicity also plays a role. In Sacramento specifically, Atkinson points to the Hispanic, Hmong and African American populations as being particularly vulnerable, as obesity, diabetes and hypertension run high in those groups.
“Your average white middle-age boomers aren’t the ones having the strokes,” says Atkinson. “The stroke person is the 45-year-old black male or the Hmong woman with severe hypertension or the Hispanic lady who is obese.”
Kaiser Permanente’s John Bissell, M.D., chief of neurology in South Sac, calls this the “California rainbow” and agrees it’s a factor in the early stroke puzzle. “When you hear people say ‘Gee, everybody’s having a stroke and they’re under 45 years old,’ part of the shift in perception has to do with California’s shifting population,” he says.
It also may be that we’re just getting better at identifying strokes, resulting in higher incidence rates. New technology has made diagnosis easier than ever, notes Bissell.
“I would guess that in a third of all strokes in people under 50, that’s the reason [for higher rates reported],” he says. In the past, Bissell says, many young people experiencing numbness or other symptoms of stroke would have been told, “You’re neurotic—it’s all in your head.”

Gender and Lifestyle
Being a baby boomer female may also heighten one’s risk of early stroke. While stroke is generally more common in men, women 45 to 54 were more than twice as likely to have a stroke as same-age men, according to a recent study out of UCLA. Researchers said the reasons for the disparity were not immediately clear, but theorized that heart disease and the infamous “midlife spread” may have something to do with it. In addition, taking birth control pills may double a woman’s risk of stroke, according to the American Stroke Association. At even higher risk: Women whose migraines are accompanied by “aura” (visual disturbances), whose chances of stroke may be multiplied by 10.
But the real driving force behind the early stroke trend is the obesity epidemic, say experts—and the damage can start early. Childhood obesity was associated with premature (pre-age 55) death in a recent New England Journal of Medicine article, notes John Laird, M.D., a cardiologist and medical director of UC Davis’ vascular center. “The bottom line is that we need to do a better job at educating and caring for our young people,” he says. “We need to place more emphasis on exercise in schools and better educate [them about] nutrition and the importance of a healthy diet.”
Amen to that, say the other experts interviewed for this article, who inevitably circled back to the usual mantra: Stay trim, eat right, get regular exercise, don’t smoke, and keep cholesterol and blood pressure in check. That last one is especially important: High blood pressure is the No. 1 cause of stroke.
Steve Capps, who suffered a stroke last year at 55, learned that lesson the hard way.
“I should have been more proactive,” says Capps, who says he was being “unsuccessfully” treated for high blood pressure and diabetes, plus needed to shed a few pounds. “You’ve got to take charge of your own health. But I didn’t.”
Still, there is nothing to prepare you for a scene like this: One morning while making an omelet for his daughter, Capps suddenly became dizzy and called out to his wife.
He had no idea he was having a stroke.
“At the hospital, they kept testing my arm and leg and I could feel everything, but a couple of days later I couldn’t move my leg or my arm,” recalls Capps, who lives in Elk Grove. He underwent significant rehabilitation and was grateful to be able to return to work six months later. But he still has no use of his left arm, and walking remains a struggle, even with a leg brace and cane.

Final Word
Capps’ story is typical of many young  and middle-aged stroke victims, say doctors, who again drive home the point that lifestyle changes, in many cases, are the key to prevention.
Simply visiting your doctor once in a while also can make a big difference, notes Mercy’s Hwang.
“It’s really important to establish a relationship with a primary care doctor,” says Hwang, who admits he didn’t have one himself until last year, when his wife insisted. “They’re there for preventive maintenance, so you don’t end up in the emergency room.”

Signs of Stroke
How do you know it’s stroke? If the sudden onset of any of these warning signs appears, call 911:

– Numbness or weakness of face, arm or leg
– Trouble speaking or comprehending; confusion
– Visual disturbances
– Difficulty walking, loss of balance or coordination, dizziness
– Extreme headache with no known cause