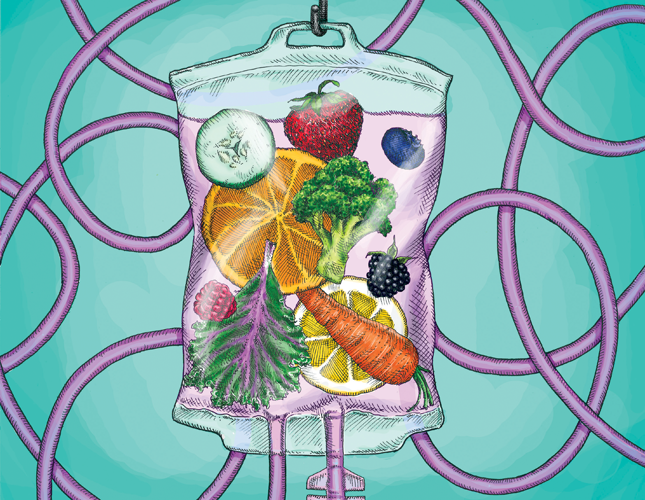 In a world where a ride home at any time of day is just around the corner in a gray Nissan Rogue, toiletries and televisions arrive at your door 48 hours after you order them, and the collective knowledge of humankind is carried around in your back pocket, we are living in an interesting time. You might not like it, but—perhaps—this is what peak convenience looks like.

While we’re capable of creating this technological wonderland of the future, we’re also still a fairly fragile species: We occasionally succumb to the toxic effects of a coughing kindergartner or of having one drink too many, both of which essentially render us useless for a while. No matter what conveniences have been invented, some inconveniences—like the common cold and a hangover—are accepted parts of life.

Until now, that is, according to proponents of IV vitamin therapy. Are we also currently living in a world where colds and hangovers don’t have to exist? Well, some of us say that we are.

Christi Barnas, a family nurse practitioner, had been researching IV vitamin therapy for quite some time. After enough reading, she decided to put her research into practice and tried an immune boost treatment to combat the cold she had been fighting off.

“It completely eradicated my cold,” Barnas says. “It was amazing.”

A Brief History
The first IV vitamin drips were developed and administered by John Myers, M.D., in the ’70s. Today, nearly all IV vitamin therapy providers offer the “Myers Cocktail,” which reportedly delivers concentrations of nutrients that are otherwise unattainable with oral ingestion. In addition, new formulas have been developed, with some targeting hangovers, others boosting the immune system or athletic performance, and even some claiming to have anti-aging effects.

That was enough motivation for her to bring the on-demand IV vitamin therapy service Drip Hydration, where she is now a managing partner, to Sacramento in September 2019. “I was so blown away by the efficacy of the immune boost that I really want to get that out there,” she says.

“The immune boost is excellent for fighting colds and other viral infections,” Barnas says. “Adding a little bit of extra vitamin C or zinc can either eliminate the cold altogether or cut the length of the cold in half and drastically reduce the symptom burden.”

Her first impression wasn’t a fluke: Barnas, who reports that she typically finds herself with a cold several times a year, received another immune boost treatment with extra vitamin C after waking up with a sore throat and feeling weak and achy. “I was better in less than 12 hours,” she says. For her, spending days or weeks feeling under the weather is a thing of the past.

Or take the case of Nickie Peacher. After a night out at a Chainsmokers concert, the 52-year-old awoke the next morning realizing that she had overdone it. “I hadn’t partied that hard since New Year’s Eve of 1997,” she recalls. We’ve all been there—clutching our pounding heads and clawing our way to the nearest glass of water while reciting the mantra that we’ll never drink again—but usually, the ultimate solution involves some form of waiting until the next day.

But Peacher knew about a loophole. She searched for an IV vitamin therapy provider near her, found Drip Hydration and scheduled an appointment.

“In 20 minutes, I was feeling normal again,” she says. (Drip Hydration says that the IV hangover treatment is a quick and effective method to combat hangover symptoms within 30 to 60 minutes.)

Both timeframes sound too good to be true, but Peacher isn’t the only person to report near-instant hangover relief. A quick search online brings up the stories of skeptics and desperate hopefuls alike, many reporting that their hangover symptoms vanished after they received the treatment. (One catch: Drip Hydration’s hangover treatment costs $279, meaning it might not be a practical replacement for a mimosa and day of Netflix and self-loathing.)

IV drips carry all risks from administering an IV and are not regulated by the FDA. Potential risks include:

Peacher is no stranger to IV vitamin therapy. She first learned about it in 2013 when she traveled to Irvine to meet with a doctor for a seemingly unrelated reason: Her late husband was battling cancer. The cancer, which had spread to his spine and pelvis, was taking over his body.

“He went through all the traditional therapies,” Peacher says, but the doctor that they met in Irvine introduced them to intravenous vitamin treatments. The therapy was not meant to cure his terminal cancer, but to help with his quality of life. “He was feeling amazing within 20 minutes of getting it, and he was fighting cancer,” she says.

Peacher’s curiosity was piqued by the respite that the treatment provided for her husband, and that was when she also began receiving the therapy. Since then, she says, she typically does one IV every few weeks. She spends around 10 days traveling every month, making frequent trips to San Diego, Austin, Las Vegas or Colorado. There, she has preferred doctors who practice IV vitamin therapy in each location, and makes sure to receive an IV either before or after her flight to keep her feeling her best. Nowadays, she prefers to work with doctors and nurses who will collaborate with her to create custom blends tailored to her needs at that time instead of pre-mixed bags. Her favorite ingredients are vitamin C, vitamin D, glutathione, magnesium and biotin.

Some insurance plans may cover IV vitamin therapy, depending on the patient’s medical needs. Typically, it’s a direct-to-consumer procedure, and unlikely to be prescribed by your conventional general practitioner. Costs for the basic treatments run from about $200 to $400, although can climb into the thousands for solutions that include stem cells.

What is IV vitamin therapy?

When fluids and medications are given intravenously, they are introduced directly into the bloodstream, Barnas explains. When we drink fluids and take medications by mouth, they are absorbed through our digestive system, metabolized by the liver and filtered by our kidneys.

How and where do you receive the service?

Drip Hydration is a concierge service. After you book an appointment, they arrive as quickly as possible, typically in under two hours. A physician or nurse practitioner will call in an order to medically clear you to receive the treatment. Then, a nurse will come out and deliver the treatment in the comfort and privacy of your own home. Most treatments take 30 to 40 minutes. In addition to the in-home on-demand service, Drip Hydration has a clinic at 1808 Q St. in Sacramento.

Because the experience is subjective, reports are largely anecdotal. Client Nicki Peacher says that she feels “relaxed, energized, and like [she] has a boost in her step” in within a half-hour of receiving the treatment. And that feeling isn’t fleeting: “For me, that feeling lasts for at least a week,” she says.

She claims the effects aren’t just physical, either. “It clears my mind—clears the fogginess that was there,” she explains. “It’s definitely a mood booster as well. I’ve gone through a lot in the last five years, being by myself, and it helps with my mood.”

Who is eligible for the treatment?