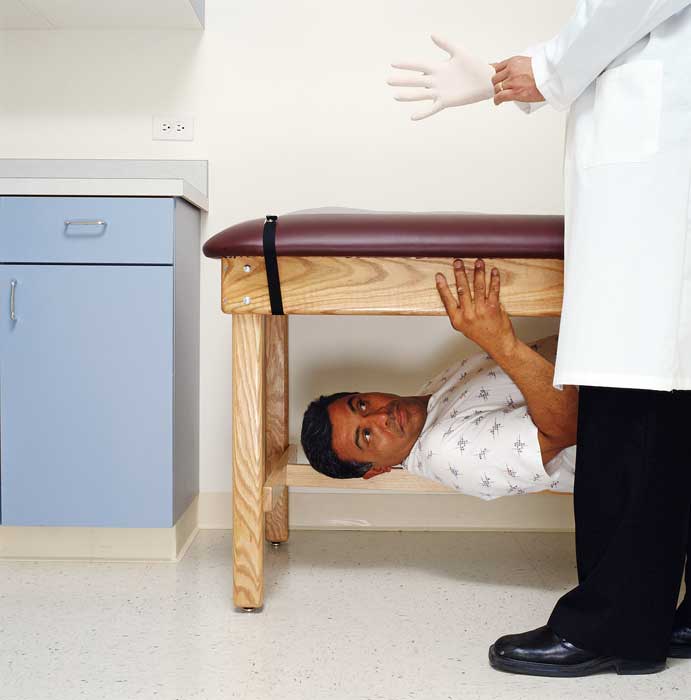 People avoid the doctor for all kinds of reasons.
Many simply can’t afford to pay for health care, especially in this economy and especially those who are uninsured, which according to a recent Gallup poll accounts for more than one in six adult Americans. But what about those who have all the resources—the cash, the insurance, the clarity of mind to know they need help—yet stubbornly refuse to make that appointment?
A confession: I’ve been one of those people. In my case, the heel-dragging was brought on by lack of faith in the medical profession, a distrust that resulted from back-to-back illnesses that were never properly diagnosed.
For others, avoiding the doctor is about the way they were raised.
“In Chinese culture, the feeling is, ‘We’re healthy overall, so why go for a checkup?’” says Tina (not her real name), a local doctor-avoider who spent the first 12 years of her life in China. Even though she’s been living in the States for nearly 30 years, she still contends that “going to the doctor is not all that helpful. Every time you go, they’ll find something wrong with you.” Only when in severe straits would she consider seeing a doctor. Tina doesn’t get regular checkups or health screenings, and would sooner take matters into her own hands than trust a health professional: When she had a painful tooth abscess, she says, she “cut it out myself.” (I didn’t press for details.)
But it is men who are notoriously singled out as the worst doctor dodgers.
Most of us can conjure up at least one story of a man (spouse, father, brother or friend) whose avoidance of doctors is Guinness Book of World Records worthy. Historically, there are accounts of magician Harry Houdini ignoring crippling pain until it was too late—he died of peritonitis, the result of a ruptured appendix—and of fitness guru Jim Fixx refusing to take a stress test despite experiencing chest pains while running. Fixx died, mid-stride, of a heart attack at 52; an autopsy revealed a diseased heart.
“If not for their wives pushing them to come in, I wouldn’t see half of my male patients,” says Arash Nassim, M.D., an internist with Mercy Medical Group. Gender socialization is largely to blame, believes Nassim. “Men are taught to fight the pain, fight the fear and be tough,” he says—a popular form of stoicism also known as sucking it up.
Denial is another biggie among men. According to a recent survey conducted for the American Academy of Family Physicians, 23 percent of men who avoid doctors say it’s because they are healthy and don’t need medical care. Another 8 percent say it’s because they don’t like doctors, and 7 percent say it’s because they’re afraid of getting bad news.
On a psychological level, avoiding bad news works for people because “if they don’t hear the news, it doesn’t exist,” explains Robin Taylor Kirk, a licensed marriage and family therapist who practices in midtown.
Fear of losing control is another factor for men and women.
“I think people think that when they step into a doctor’s office, they lose a lot of control,” says Kirk. Sometimes they’re afraid of pain that may be inflicted upon them, whether it’s a shot or another medical procedure, says Kirk.
Whatever the reason—and whether it’s you or a loved one who needs the nudge—here are a few steps that may help you inch your way toward the doctor’s office:

• Find a doctor you like
It’s not always easy to find a physician you respect, trust and feel comfortable with, not to mention one who is available through your medical plan. But it is one of the most essential steps in ensuring you’ll actually seek help.

• Don’t fight your anxiety
As Kirk says, “what you resist persists”—meaning the longer you fight anxiety, the longer it will plague you. By becoming more aware of what anxiety feels like (a flip-flop in your stomach? a tightening across the chest?) and in learning to live with it, you eventually can learn to manage your fears, says Kirk.

• Have a heart-to-heart
If a loved one is avoiding the doctor, Nassim suggests sitting down for a talk. “If you nag them to death, they will ignore you,” he says. Instead, tell  them that you love them and that you want them to be around to grow old with you.

• Be patient
“Have some compassion,” says Kirk. Ask if there’s anything you can do to help, whether it’s accompanying them to the appointment or just listening when they need to vent.

• Make an appointment for them
Sometimes, there’s just no other way.

If all else fails, try this quote, courtesy of Kirk: “Anxiety is really unpleasant, but it doesn’t kill people. Not going to the doctor can.”

Riveting Research: Right in Our Own Backyard—An impressive amount of research is going on at UC Davis Medical Center, the region’s only academic medical center. Here’s a sampling of  the innovative work taking place there:
• New medicines for prostate cancer. Testosterone-suppressing medicines are the typical treatment for men with advanced prostate cancer, but most tumors become resistant. UCD researchers have pinpointed some potential reasons why, leading to clinical trials of other drugs that may be more effective.
• Help for ADHD. Which is more effective in helping to improve attention and memory in children with ADHD—parents or computers? To find out, researchers at UCD’s MIND Institute have devised a study.
• Getting to the root of childhood diseases. With childhood obesity, diabetes, autism and asthma on the rise, UCD is taking part in the National Children’s Study to examine how environment and genetics may cause or contribute to these and other diseases.
• Dementia prevention. Using novel imaging techniques and clinical information, UCD researchers have found that high blood pressure, atherosclerosis and inflammation can have damaging effects on the brain’s ability to manipulate and store information.

Don’t Pass Along This Gift—Keep It to Yourself
It’s a scenario familiar to us all: You’ve had a cold for three days. You’re feeling better, but your nose is runny and you’re a bit run-down. Meanwhile, you and a friend have plans to attend a concert the next night. You’re dying to see the show, but you’re also afraid of spreading your germs. Should you cancel?
WebMD says yes, because you are contagious during the first three days you have cold symptoms, although experts agree that with colds and flus, we’re actually most contagious right before we feel sick.
“There’s not much we can do about that,” says David Herbert, M.D., infectious disease specialist at Kaiser Permanente in Sacramento. He says knowing when we are contagious can be “a little confusing.” But as a rule of thumb, he says, the degree of contagion tends to parallel the way you’re feeling. In other words, as long as you’re not feeling well, you’re probably contagious. And the better you start to feel toward the end of the cold, the less contagious you are.
Whereas it’s believed that colds are mostly transmitted by contact, flu viruses are more commonly airborne, says Gordon A Wong, M.D., the medical director of infectious disease at Mercy General Hospital. If you are within six feet of someone, you’re in danger of spreading (or getting) the flu, which is thought to be transmitted through respiratory “droplets” that occur when people cough, sneeze or talk.
The flu can be a serious illness that can lead to pneumonia, hospitalization and even death, Wong notes—so don’t mess around. If you have the flu, follow the Centers for Disease Control and Prevention guidelines: Stay home for at least 24 hours after your fever subsides, and remember you are contagious for a long stretch, beginning a day before symptoms arrive and up to five to seven days after getting sick.