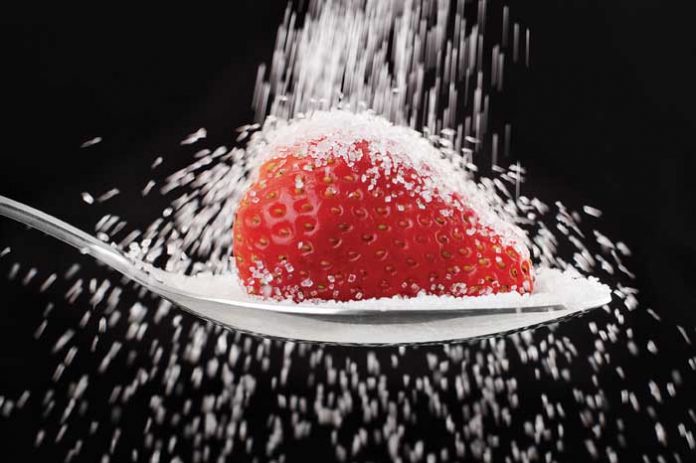 Sugar is sneaky.
It lurks in unexpected places, such as spaghetti sauce, peanut butter and pretty much all processed foods, says Dennis Godby, N.D., a California-licensed naturopathic doctor in private practice in midtown. So if you think you’re safe because you’ve sworn off sodas, Snickers and sticky cinnamon buns, think again.
“People frequently come into my office thinking they’ve got a pretty good diet,” reports Godby. But they’re eating sugar even when they don’t realize it, he says—and that’s one reason why so many Americans are suffering from sugar overload, ingesting on average around 22 teaspoons of added sugar a day, according to the American Heart Association. (Note: We’re focusing here on added sugars, not the naturally occurring sugars found in foods such as fruit and milk.) The AHA got on its high horse about Americans’ sugar consumption last year, recommending no more than 100 calories (or about 6 teaspoons) of added sugar per day for most women and 150 calories (or about 9 teaspoons) for men. Drink just one 12-oz. soda, and you’re already there: Each contains 9 to 11 teaspoons of sugar. Ouch.
It’s not news that sugar can ruin your teeth and expand your waistline, or that it’s dangerous for folks with diabetes. But you may be surprised by some of the other ways the sweet stuff can sour your health. Here are a few.

It can raise cholesterol
Newsflash: A low-fat diet is not the only key to lowering cholesterol. Reducing sugar intake can help, too. (Who knew?) According to a study published earlier this year in The Journal of the American Medical Association, the more added sugar you eat, the more your triglyce-rides (blood fats) tend to rise, increasing the risk of heart disease. “There’s definitely a sugar association with cholesterol, and until recently we didn’t know that,” says Monica Randel, a registered dietitian and nutrition educator with Kaiser Permanente in Sacramento. It’s a double whammy, says Randel: Not only does sugar raise triglycerides, but it lowers HDL, the “good” cholesterol. Godby says he’s seen “dramatic” changes in triglyceride levels among patients who cut sugar, so it may be worth a try.

It has been connected to cancer
Ever heard “sugar feeds cancer cells”? It’s basically true, says Godby, though it’s not quite that simple. It’s really the increase in insulin levels that’s to blame. It goes something like this: Sugar increases glucose levels, which increases insulin levels, which can increase cancer risk. “The problem is not insulin, but too much insulin—hyperinsulinemia,” explains Godby. Mainstream medicine seems to agree. From cancer.org, the American Cancer Society website: “By promoting obesity and elevating insulin levels, high sugar intake may indirectly increase cancer risk.”

It masks other problems
The great thing about sugar cravings, says local food-mood expert Trudy Scott, is that it tells you something’s wrong. “It’s really a message from your body that something’s going on,” says Scott, a certified nutritionist. Low blood sugar (hypoglycemia) is probably the most common issue among her clients, says Scott, but there’s a myriad of other reasons why people use sugar in a self-medicating kind of way. Among them: hormone, nutrient or neurotransmitter (brain chemistry) imbalances, such as low serotonin or low GABA. “People who have these kinds of issues use sugar to make themselves feel normal,” says Scott. “It’s like their drug of choice.” That’s why it’s so important, she says, to get to the root of the problem. Much can be gleaned, says Scott, by simply looking at your patterns: If you’re an emotional type who turns to sweets for comfort, an endorphin imbalance may be at play; if you grab a glass of wine (or the nearest chocolate bar) to calm down at the end of a stressful day, you may be a “GABA girl” (or guy). The good news, says Scott, is that many of these imbalances can be easily resolved through dietary changes and/or supplements, such as amino acids.

It speeds the aging process
Want to get old quick? Eat a lot of sugar. “Sugar causes premature aging,” Godby says. “The fastest way to metabolically age is to increase insulin levels.” Insulin’s role in the aging process has been borne out in a number of studies. In a fruit fly experiment at Brown University, researchers found that the flies lived much longer when an insulinlike hormone was reduced inside their fat cells. And those whose concerns are a little more, ahem, superficial, may be interested to know that a diet high in sugar can cause premature aging of the skin due to increased inflammation and collagen breakdown, leading to wrinkling and sagging.

It’s linked to candida, IBS and other digestive problems
There’s nothing wrong with having the yeast microorganism candida albicans in certain parts of the body—it’s natural. But eating too much sugar can feed candida, causing it to spread, says Kaiser’s Randel. “If your immune system is kind of depressed and you’re eating a lot of sugar, you’re feeding the candida and it can start to overwhelm everything,” she says. “If it gets worse, it may go into the bloodstream.” The National Candida Center puts candida overgrowth, irritable bowel syndrome and intestinal permeability (“leaky gut syndrome”) all under the heading of dysbiosis, meaning the intestinal flora is out of whack. In a nutshell, explains Randel, it’s about bad bacteria overwhelming the good—and sugar feeding the bad. (It can also feed the good, notes Randel, but that’s a whole ’nuther article.) The bottom line: Sugar contributes to candida, which is why cutting out sugar (and other foods thought to support yeast growth) is often first-line treatment, at least in the holistic world; conventional docs may have a different take. “There are no clinical trials that document the efficacy of a candida cleanse diet for treating any recognized medical condition,” writes internist Brent A. Bauer, M.D. on mayoclinic.com, the Mayo Clinic website. So what do you do if you suspect you’ve got a candida problem? You might start with the self-test offered by the National Candida Center at nationalcandidacenter.com/candida-self-exams/.

It can prevent us from eating the good stuff
The problem with sugar, says Randel, is not necessarily the sugar itself. It’s the way it gets in the way of healthful eating. “You have to take into consideration whether it’s the sugar that’s bad for you or it’s just that you’re not eating the fruits and vegetables,” says Randel. “If you’re eating something that is sugary and processed, it often means you’re not eating the things you should be eating.”

But sugar isn’t all bad, says Randel; in fact, there’s at least one good time to indulge: post-exercise. “The first half-hour after exercising, your muscles are going to be looking for the sugar you’ve just used up, so it’s advisable to replace it,” she says.  But with what?
“Fruit, fruit, fruit,” she says, laughing.

“A little sugar isn’t bad; it’s how much you have of it. The take-home message: moderation. It’s so boring.”—Monica Randel, dietitian and nutrition educator, Kaiser Permanente

“Craving sugar does not mean we’re weak or that we’re a failure. It means we’ve got some brain chemistry, nutrient or hormonal imbalances that need fixing, or perhaps candida. Quitting [sugar] is not about willpower.”—Trudy Scott, certified nutritionist

“I think it’s better doctoring to help people to take a look at why they’re eating sugar, than to say ‘just stop eating it.’ For most people, going cold turkey is not best. It’s better to gradually cut it down. Be kind to yourself.”—Dennis Godby, N.D., naturopathic doctor