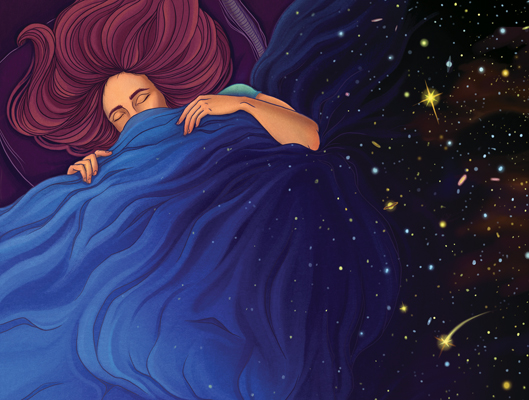 Sleep should make up an entire third of our lifetime. It’s simply a human necessity. For some, falling asleep and getting a good night’s rest is easy. Yet there are 70 million American adults who claim to suffer from sleep problems. Out of those millions, 60 percent say they suffer from a chronic sleep illness such as sleep apnea, a disorder where breathing is repeatedly interrupted, or varying degrees of insomnia, according to the American Academy of Sleep Medicine.

“Apnea is the sensation of breathing where you have no breath,” says Wade Williams, owner of California Sleep Solutions.

Sleep Interrupted
Williams and his team of sleep technicians have monitored sleep patterns for the past 16 years inside the company’s sleep labs. He says that during sleep apnea, when a person’s airway is blocked, oxygen levels will drop, followed by a decrease in heart rate. He says that the brain immediately recognizes these abnormal activities as a problem and begins to pump adrenaline through the arteries in order to arouse the sleeper.

“A sleep study is the only way you’re going to accurately diagnose someone. When you come into the sleep lab, we hook up sensors and respiratory valves so we can monitor you overnight while you’re sleeping. We’re looking for obstructions, how severe and in what [sleep] positions they occur,” Williams says.

Sleep apnea can affect people in several ways, including sleepiness and lethargy. It can also influence memory and lead to high blood pressure, even heart attack or stroke. Some common symptoms associated with sleep apnea are loud or excessive snoring, bouts without breathing and repeated abrupt awakenings due to lack of oxygen.

But there are solutions to sleep apnea. Williams says it all begins by visiting a doctor who will assess, through a short questionnaire, whether or not a sleep study is in order.

Catch Some Proper Z’s
Although commonly mistaken for a disorder, insomnia is more of a description of a bigger, underlying problem, says Lydia Wytrzes, M.D., a neurology specialist and director of Sutter Sleep Disorders Center.

Last February, the Centers for Disease Control and Prevention surveyed adults and found that on average, one out of every three participants admitted they get less than the recommended seven hours of nightly sleep. For Wytrzes, sleeplessness is a complex issue that varies from person to person, but it’s also an issue with many reliable solutions.

“Insomnia is a definition. It’s a word. It’s not a disorder,” Wytrzes says. “The goal is to dig below the surface to determine the cause for the insomnia. Then you can come up with a treatment plan that is much more likely to be effective.”

She says half to two-thirds of short-term or acute insomnia is due to stress, anxiety or depression, while long-term insomniacs usually have additional reasons.

For more than 30 years, Wytrzes has helped patients gain better control over their sleep issues by recommending a variety of affordable techniques, from keeping a nighttime diary to record bothersome sleep patterns to developing a bedtime routine that includes list making, a method that helps rid a busy mind of the next day’s responsibilities before bed.

She says sleep should be seen not as a luxury but as a necessity, and she often challenges her patients to shake up their nighttime routines with the following six techniques.

1. Develop a Consistent Routine—Nothing destroys sleep more than inconsistency. So develop a sleep routine that includes regularly scheduled bed and rise times to keep the internal sleep clock on time. It needs to be trained to know when it should shut down into sleep mode and when it should wake up. However, if the sandman isn’t knocking at the door, Wytrzes says to get out of bed for five to 10 minutes and do some light, quiet reading in a comfortable area outside the bedroom to get the mind off of sleep.

“The point is not to become so active and engaged that it makes it harder to fall asleep. That’s why we say don’t watch TV and don’t go on Facebook,” she says. “What I tell people to do is have somewhere that has some very quiet, relaxing reading material like Smithsonian Magazine, National Geographic or Reader’s Digest. Whether you read until you get tired, which is often recommended, or read for a bit, get your mind off sleep and then try again. It’s often much easier to fall asleep if you can just get your mind off your worries about sleep.”

2. Eliminate Distractions—A dark, quiet, comfortable bedroom that eliminates distractions is the perfect combination for some quality R and R. A huge source of disruption these days stems from electronic devices. These handheld gadgets disrupt sleep because people become so engaged on social media or other popular apps that the brain simply can’t go into sleep mode, not to mention the bright light smartphones give off in the dark.

“There’s a lot of data out there that shows the lights emitted from these electronic devices are actually diminishing melatonin, which is a hormone that slips the sleep clock into sleep mode,” Wytrzes says.

Smartphones, tablets and computers emit blue light, which Wytrzes says is one of the most intense in the spectrum. Nowadays, there are blue-light filter apps available to download onto most electronic devices, but Wytrzes still recommends quietly reading a book instead of falling down the internet rabbit hole.

“The blue-light filter may help,” she says. “But I’m afraid that sometimes the other problems with those technologies overwhelm the little benefit that you’re going to get just from filtering out the blue light.”

3. Engage the Day—Maintain a healthy level of mental and physical engagement during the day. Wytrzes says the reason we sleep at night is not just because we have an internal clock that wants to go into sleep mode, but also because having a lot of daytime activities makes us tired.

“We build up a pressure for sleep from our mental and physical activities, which can only dissipate in sleep,” she says. “So you want both of those things. You want an active and engaged day, mentally and physically, and you want a quiet opportunity to sleep at night.”

4. Avoid or Limit Naps—If naps are a deal breaker when it comes to changing up sleep behaviors, Wytrzes will let it slide, but all naps should be limited to 15 minutes in the afternoon as measured by a timer.

“Meaning, get up when the timer goes off because you only need so much sleep in 24 hours,” Wytrzes says. “If you’re getting too much sleep during the day, your nighttime sleep is going to become less and also lighter. A 15-minute nap in the afternoon is no problem as long as it doesn’t turn into an hour-and-a-half nap.”

5. Daily Exercise—Regular aerobic exercise will kick off a slight elevation in body temperature and is especially beneficial to achieving a better night’s rest. According to Wytrzes, a workout in the late afternoon or early evening is best because it initiates a rise in melatonin.

“This is exactly what you want to start happening in the evening in order to feel sleepy at bedtime,” Wytrzes says.

6. Combat Stress—Deal with the demands and responsibilities of life’s stresses well before bedtime. An overactive brain prior to sleep is the first thing that will come between you and seven to eight hours of much-needed rest. If negative thoughts, concerns and anxieties consistently come back to haunt your dreams during the night, Wytrzes says, it becomes much harder to really fall asleep.

One recommendation she makes is a technique she calls list making.

“Put on PJs, brush your teeth, get ready for bed, and get out a legal tablet and draw a line down the center,” she says. “On the left-hand side, write all those things you’re going to worry or think about anyway as soon as you start going to bed, and be as specific as you can about it. On the righthand side, try to solve those problems before you go to bed.”

Write down troubles such as “What’s on the agenda for tomorrow?” “What’s worrying you?” Then try to solve those problems on the right side before sleep.

“If you can’t solve your problems, write down, ‘I cannot solve this problem tonight.’ Therefore, you’ve acknowledged it, but you also said you can’t fix it tonight. Turn it over, put it away and be done with it.”

Increasingly throughout the years, Wytrzes says she’s witnessed the world of medicine acknowledge the large role sleep plays in health. For her, a good night’s rest is valuable, and her goal is to see that everyone experiences true sleep.

“Sleep is so important to your health, your mental outlook, your memory and your physical well-being,” Wytrzes says. “It’s a no-pain, no-gain proposition. If you want to change your sleep, especially if you’re a bad sleeper, you have to do something differently. But luckily, there are things to do that are very likely to work.”