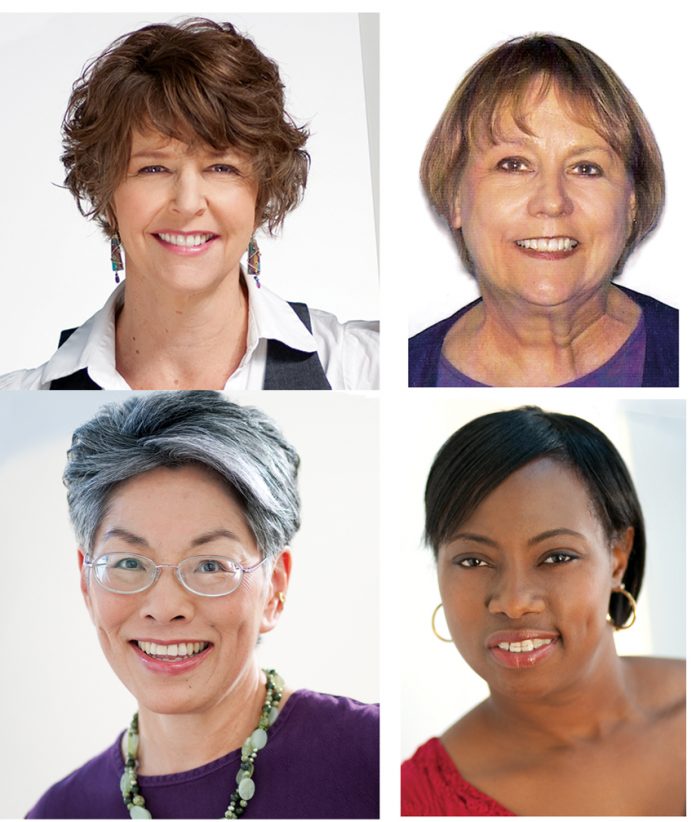 In the corporate world, women are still bumping up against the glass ceiling. But in the nonprofit sector, they’re firmly in charge.

When it comes to that luxe corner office in the executive wing, “Godfather of Soul” James Brown said it best: It’s a man’s world.

Although women make up more than half the work force and earn six in 10 college degrees, only 15 Fortune 500 companies are headed by women. The ratio improves slightly at smaller businesses, but even there, more of the names at the top of the flowchart belong to men.

Why? The answer could be societal. “Women have a tradition and history of being outsiders,” says Judy Rosener, professor emerita at The Paul Merage School of Business at UC Irvine. “So we see things differently. It’s not that we’re better or more ethical than men, but I think we ask new kinds of questions . . . that the good ol’ boy network won’t say.”

Thinking as an outsider and asking tough questions might not earn anyone a key to the corporate executive restroom, but it might be a résumé-building strategy in another sector of the economy: the nonprofit world.

Even though women reign among charities, it doesn’t mean they get the perks and pay of private, for-profit CEOs. Lucas says the work of a nonprofit executive director is difficult, the hours are long and the salary can be relatively low given the high education level required. But the “psychic benefits” of making society a little bit better often outweigh the negatives of a smaller salary, she says. “It’s a calling.”

Four Sacramento area women who answered that call say they may not receive the fat paychecks of their corporate counterparts, but they get something better: a job they love. A LIFE IN BALANCE

CARRIE ROSE seemed to be living the dream promised by 1960s feminists: She had a law degree from UC Davis, a great job, marriage to an engineer and two adorable daughters.

Perfect? Not to Rose, who worried about sacrificing quality of life for career. “It just didn’t feel to me as fulfilling as I thought it would,” says Rose, 47. “It just got to be too much to balance.”

Rose left her legal job and, after a brief stint as owner of a children’s clothing store, landed at The Parent/Teacher Home Visit Project, an influential organization that unites teachers and families as partners in the education of children. Started in Sacramento, the project now works with teachers and families in eight states and has plans to become a national organization. Since Rose became executive director in 2003, the group’s work has been recognized by the National Education Association, The George Lucas Educational Foundation and the Harvard Family Research Project.

“I honestly feel like we make a difference,” Rose says. “It’s the thing that was missing in my other work. I didn’t have that clarity. This is so rewarding. After all these years, I love it. In fact, I like it so much I have to remember to work just 40 hours.”

Rose says nonprofit work simply fits her personality more than law. “It’s got a relational focus, and that’s so much of who I am as a person. So it appeals to me.”

With a great résumé and experience at the helm of an organization, would Rose be tempted to go for a bigger paycheck in the corporate world?

“I think that shipped sailed for me,” she laughs. LEAVING A MAN’S WORLD BEHIND

“I don’t ever get up in the morning and say, ‘I don’t want to go to work,’” says MARY HARGRAVE, who has led River Oak Center for Children, Sacramento’s largest provider of behavioral and mental health services for youngsters, for 28 years. “I’ve loved every minute of it.”

A Sacramento native (she grad-uated from El Camino High School and Sacramento State before getting a doctoral degree in psychology from the University of Washington), Hargrave could have had a barrier-breaking career in the military. She was, after all, the first female psychologist in the U.S. Air Force.
“I thought it was a real valuable experience,” Hargrave, 65, says. “It was an inside look at a man’s world. I learned about being part of a team and about everybody having to do their job. The military is very logical and rational. It was a good place to start.”

But as a child of the ’60s, Hargrave says she was drawn to the idea of “trying to make the world a better place.” So after the Air Force, she worked in public mental health at a large state hospital in Oregon. Eventually, she returned home and began her decades-spanning tenure at River Oak, where about 1,000 children and their families are served daily at three sites.

The work, Hargrave says, isn’t easy. “They’re all poor kids, and 40 percent . . . are foster kids, so we deal with a lot of abuse and neglect. We certainly all work long hours. But you just do the work that’s to be done.”

This year, Hargrave is retiring, as are so many of her friends in the nonprofit world. She worries that younger generations may be less interested in pursuing what she calls “an important mission.” “Who is going to take our place?” DONNA YEE, chief executive officer of Sacramento’s Asian Community Center, believes women have a unique ability to succeed in the nonprofit realm. “What we (nonprofit providers) are selling is something different, and women are better at selling this kind of product. It’s not about widgets. It’s about creating value, which is abstract.”

Yee, 62, grew up in San Francisco, the child of a working-class family that sometimes relied on public services to get by. After high school, she attended San Francisco State University during the tumultuous campus “Third World” strikes of 1968–69, when concerns about the draft turned into demonstrations of discontent by minority students. Later, she witnessed changes in her neighborhood that fueled an interest in community service.

“Chinatowns, instead of being tourist places, became places where there were real problems and real needs,” she says.

In college, she became interested in working in the public-service sector “because I had spent so much time benefiting from all these services,” she explains. Eventually, she earned her master’s degree from the University of Washington and decided to focus on working with older adults.

Returning to San Francisco, she landed a job as an assistant administrator at Laguna Honda, a skilled nursing and rehabilitation center owned and operated by the San Francisco Department of Public Health. Her experience there paved the way for her current position at the Asian Community Center, which serves older community members at three locations.

She likes her job because the community she serves is supportive and dedicated to teamwork, she says.
“The best part is that I don’t have to worry about having answers,” she says. “I feel able and prepared. And if something comes up, we can figure it out. I love the notion that this community is willing to try new things they haven’t done before. We’re all on a wonderful learning curve that’s fun.” NOT ABOUT THE MONEY

RHONDA STALEY-BROOKS, 37, became executive director of Big Brothers Big Sisters of the Greater Sacramento Area at an age when many women are still stuck on the career ladder’s lower rungs: 29.

“At the time of my appointment, I was the only Big Brothers Big Sisters CEO in California under 30, and the only African-American female,” she says.

A childhood “military brat,” Staley-Brooks was born in England, went to school in Italy and, after a few stops, landed in Sacramento in 1992. While studying child development at Sacramento State, she began as a caseworker at Big Brothers Big Sisters.

“The kids, the stories, the volunteers—it thrilled me to come to work every day,” says Staley-Brooks, who earned her bachelor’s degree in 1995 and stayed on with the organization as a program manager and, eventually, chief executive officer. “What we do locally is impactful.”

Married to an electrician and the mother of 10-year-old twin sons, she says her schedule is flexible enough to allow her to participate fully in her children’s lives and still keep up with her demanding job.

“We work hard to play hard,” she says. “I have a good balancing act going on. I might put in a couple more hours in the evening when the kids are asleep, but between 5 p.m. and 8 p.m., I’m there.”

As to whether members of her generation will step up and fill service positions as baby boomers retire, Staley-Brooks points to her fellow Sac State grads, many of whom have worked for nonprofits for 10 or more years.

Her only regret over choosing a life of service over a life of commerce is “the paycheck,” she says jokingly. “It’s not really all about the money. I don’t have to be the breadwinner. And women are driven differently than men.”

Catching up with Tom Sullivan

Adding It Up With Kelly Brothers