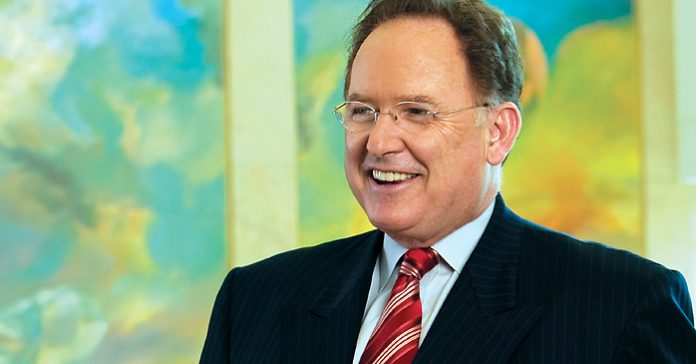 Sullivan built his reputation with business reporting, but his interests have never been limited to the financial world. His radio show covers the spectrum of current events. And his TV experience dates from 1982, when he began reporting for KCRA 3.

He knows what he’s talking about. Sullivan spent three decades in the financial services industry as an accountant and a founding partner of The Sullivan Group, a Sacramento investment management firm. He spent four years as a trooper with the Washington Highway Patrol.

Sullivan holds degrees in business and accounting. He attended Seattle University, the University of Washington and the Stanford University Graduate School of Business Executive Program. He lives in New York with his wife and daughter. The family maintains a residence in Granite Bay.

His local ties remain strong. Sullivan pops into the KFBK studios several times each year. And he returns this month to serve as master of ceremonies for the Sacramento Metro Chamber of Commerce speakers forum, Perspectives, which celebrates its 15th year Oct. 9. “I love Perspectives,” Sullivan says. “I’ve worked all of them, and will continue as long as the Metro Chamber will have me.”

Sullivan recently spoke with Sacramento magazine about broadcasting, the economy, the pace of life inManhattan and his first love: flying.

How is New York City different from Sacramento?
New York City is a different planet compared to Sacramento. There is no comparison. Obviously, the weather is humid in the summer and very cold in the winter. The culture is so varied in New York. New York is a melting pot of all the cultures of the world. It actually makesit easier because of the variety. No one group is pitted against another. And, of course, the restaurant choices are endless.

From your national perspective, is Sacramento’s economy as bad as the rest of the country—or worse?
The economy in Sacramento appears from afar to be one of the worst in the country. I would say the state of Michigan and the city of Cleveland are similar. Economic reports continue to show the Sacramento region high on all the lists showing problems: i.e., foreclosures, the state of California budget stories, et cetera.

Your political bent is conservative. How is that playing on the national scene?
I don’t think you can say my political bent is conservative. I have proudly proclaimed myself a fiscal conservative, but I follow a much more independent path when it comes to social issues. How that plays across the nation is not my motive. However, it appears the nation is just right of center, and overall I am just right of center. Therefore, my views and opinions are more likely similar to a large segment of the population.

A key to getting listeners is being controversial. How do you try to do that?
I strongly believe that being controversial is not a key to getting listeners. You can make headlines, but you cannot keep an audience tuning in if you try to be controversial every day. Instead, I believe the key to getting and keeping listeners is to do two things: Entertain them and inform them. Which comes first depends on the topic and the day, but both have to be continuing elements to a successful talk show. The format is a very intimate form of broadcasting. It is foreground, not background. People really listen. You cannot be a phony or an act. After 21 years and over 5,000 daily shows, you have to be real every day.

How has the economic downturn impacted the questions you receive from the public?
Unfortunately, the economic problems have boosted my radio and television shows. People are hungry for information about what to do with their money. I bring something to the show most talk shows don’t have, and that is my 30 years of investment management. Even though this downturn is the worst in 60 years, there are guideposts to follow. I not only understand how Fannie Mae works; I can even explain in simple English a credit default swap.

When will the economy turn around?
The economy has already slightly turned around, using many measurements. But it doesn’t feel like it, because normally housing has led us out of prior slowdowns but not this time. Jobs, which usually are the last to see recovery, are also going to get slightly worse and stay in short supply for many months to come. So with housing values and jobs still much lower than just a few years ago, most people will not feel better. The focus will be on the lack of recovery until another year passes.

You were a Sacramento regional icon for decades. Is the national stage more challenging in terms of your expertise?
The national stage is actually more fun. I have met and become business friends with many of the top financial people in New York over the last two years. We have great conversations about topics that impact Wall Street to Main Street. For me, it isn’t more challenging. It is exciting to kibitz with the people who make the decisions in the financial capital of the world.

How’s the syndicated radio show rollout going?
The syndication of the radio show is progressing, but not as fast as I would like. The radio business is like many industries that rely on advertising—and it is slow. I have confidence it will pick up with the economic recovery. But I have stations in all regions of the country, from Maine to Florida and the Pacific Northwest to Southern California and many points in between. Some of the cities where you can find my show are Dallas, Atlanta, Tampa, Pittsburgh, Charlotte, San Antonio, Tulsa and San Diego.

Are you able to keep your airplane piloting skills sharp?
Kind of. I always want to fly more often, but until I find a way to make the clock grow more hours, I still have to balance with a very busy work schedule. I still put in 12 hours each day at Fox, so my flying is limited to mostly weekends. Flying in the Northeast is more challenging. Not only is the air traffic much busier, but you have to dodge thunderstorms in the summer and ice in the winter.

Is New York City home from now on?
It is home for now, but not forever. If and when I ever retire, the plan is to return to California. I’m not alone. I can’t tell you how many New Yorkers tell me that is their plan, too.

The CEOs of Charity

Adding It Up With Kelly Brothers