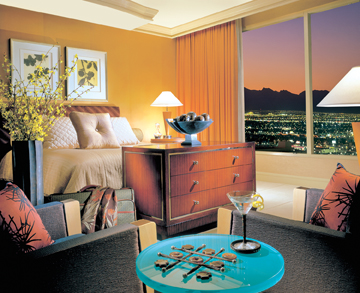 On my first-ever visit to Las Vegas, I arrived on a Lear jet clutching a small bag holding a bikini and an evening gown. Dark-suited bodyguards with bulging coats whisked my little group away from the crowds, intent on protecting not me, but the Middle Eastern prince my friend was dating. It was quite a heady introduction to the exotic world of high-stakes gaming and full-production shows. Like a character in an old black-and-white movie, I swished through the casino of the Sands in a flowing gown and leaned over the baccarat table, coolly looking on as thousands of dollars changed hands. Squinting through the hazy cigar smoke, I could almost imagine Frank Sinatra and his pals about to stroll around the corner on the way to a show. The glamour was dazzling, and I quickly secured a Middle Eastern prince of my own to ensure future Lear jet trips.

Ah, but the Sands was plowed under years ago to make way for another hotel, and my prince has long since returned to his small country. As you might imagine, my subsequent trips to Vegas haven’t been nearly as posh. In fact, they’ve been downright scruffy, a blur of budget hotel rooms and long hours spent at trade shows and sales meetings. I got to know the aisles of the Las Vegas Convention Center all too well, and I saw Tom Jones gyrate on the stage more times than I care to admit (and enjoyed it every time, which is even more difficult to admit). Just the thought of a trip to Las Vegas used to make me weary.

But Las Vegas has recently made a big mark in the luxury-travel market. So it seemed high time to give Las Vegas a chance to recapture some of the glitter I’d seen there before, to try and find a touch of the luxury I’d dipped my toe into on my first trip. Arriving by Lear jet isn’t always in the cards (and wasn’t for me this time), but from big splurges like a suite at The Ritz-Carlton, Lake Las Vegas to small treats like a handmade chocolate truffle from Jean-Philippe Patisserie in the Bellagio, nowadays Las Vegas offers a bit of pampering and genuine luxury for visitors in every price range.

Steve Wynn is well-known in Las Vegas, having built the Bellagio there, among other hotels. Just this past April, he opened a luxury hotel stamped with his own name: Wynn Las Vegas. A gleaming curved bronze tower that fronts Las Vegas Boulevard, Wynn Las Vegas adds a much-welcome understated tone to a street filled with over-the-top architecture. The interior design is one of restrained elegance, but with some playful elementsÑtraditional marble tile floors punctuated with quirky modern mosaic tiles, and large, graceful silk parasols hanging upside down over a grand staircase.

A focal point of Wynn Las Vegas is The Lake of Dreams, with a 70-foot waterfall and 3-acre lake outfitted with 4,000 color-changing lights and bronze sculptured figures. Guests can sit for hours at an outdoor bar and drink in this tranquil sight, and not be aware of the noisy Las Vegas Strip just outside the door. Rooms are equally sumptuous, with signature beds outfitted in 320-count European linens and spacious bathrooms with oversized Turkish towels. Rates for regular rooms start at $189 a night, suites start at $450.

Although superstar chefs have been cropping up in Las Vegas with regularity in the past few years, Wynn scored a major coup by persuading Daniel Boulud to open an elegant brasserie. The hotel has several other high-end restaurants along with six casual restaurants and two nightclubs.

What’s a big Vegas hotel without a big Vegas show? To the distress of theater impresarios across the United States, the Tony Award-winning show “Avenue Q” skipped taking a victory lap around the country to smaller venues and instead became a permanent attraction at the hotel. Wynn Las Vegas also has a show called “Le RÂve,” created by Franco Dragone, formerly of Cirque du Soliel. When not watching a show, guests can view some fabulous artwork. Steve Wynn established an art gallery at the Bellagio and has created a second one at his newest hotel to offer visitors a glimpse of his personal collection of European and American masterpieces.

The resort hotel has its own golf and country club located just behind the complex, with an 18-hole professional-level course designed by Tom Fazio.

Although Sacramento developers have fallen under the spell of loft living, Las Vegas hoteliers beat them to it. A year ago this past January, the MGM Grand introduced new luxury accommodations called Skylofts. Sophisticated yet understated, these two-story hotel suites are located on the top two floors of the MGM Grand and feature 24-foot-tall floor-to-ceiling windows with breathtaking views of the Strip. Priced from $800 to $10,000 a night and ranging in size from 1,400 square feet to 6,000 square feet, the lofts come with a host of perks. Guests are met at the airport in a Maybach 62 limousine and whisked to the hotel to be met by their personal butler. And if having a butler on call 24 hours a day isn’t enough of a treat, guests of the Skylofts also receive engraved personalized stationery and business cards.

While it opened in 1998, the Bellagio has loomed large in the popular imagination as the luxury hotel on the Las Vegas Strip thanks to a starring role in the 2001 movie Ocean’s Eleven. Even the basic rooms are graced with genuine glamour, from the marble-tiled room entries to the sumptuous draped half-canopies over the beds to the carved marble sinks found in the bathrooms. Small luxury touches include Bellagio’s custom line of olive oil-based soaps and toiletries for guests to use. With rooms starting at $159, it would be a challenge to find such opulence for a similar price elsewhere in the country.

Bellagio opened its Spa Tower in 2004, adding another 928 rooms to the hotel’s existing 2,602 and giving its spa facilities a major upgrade to boot. For a serious indulgence, guests can request the Bellagio Hand, Foot and Scalp Royal Ritual or add the Hot Toe Bliss option to a regular massage. Imagine warm, small stones placed between your tired toes after a day of casino crawlingÉ

If you plan to visit Las Vegas in the next few months, you can still see The Impressionist Landscape From Corot to van Gogh exhibit at the Bellagio Gallery. Scheduled to close in January 2006, it has been held over through April. The 34 paintings include “The Water Lily Pond” by Monet, “Girls Picking Flowers in a Meadow” by Renoir and van Gogh’s “Houses at Auvers.” All are on loan from the Museum of Fine Arts in Boston.

Indulgent as it is, if you stay at Bellagio, you’ll need to learn to share. Many visitors to Las Vegas spend their time “hotel hopping” from one lobby to the next to take in all the sights. It adds up to a somewhat crowded feeling in the public spaces and long lines at some of the more popular restaurants and cafes.