If you weren’t around to witness the 1960 Winter Olympics at Lake Tahoe, you can still experience the sites where the games were held and see collections of Olympic memorabilia that capture the pageantry that elevated the region to a world-class resort. I’ve had a lifelong fascination with the 1960 Winter Games. My older brother skied the Olympic torch over Donner Summit, which made him a legend in my family, at least. He was part of a 500-mile relay team of high school students who brought the torch from Los Angeles, through the Central Valley and into Olympic Valley for the ceremonial lighting that marked the opening of the games.

As torch bearers, these teens didn’t wear official uniforms of the Olympics, nor were they followed by television cameras or cheered on by throngs of people. My brother just laced up his leather boots and pushed down the cable bindings on a pair of long wooden skis, and then accepted the torch from another skier before traversing his way over the summit and passing it off to the next torch bearer who headed down to the Tahoe Basin.

Many aspects of the VIII Olympic Winter Games were intimate and informal like that, quite unlike the modern-day Olympics.

Palisades Tahoe, known as Squaw Valley until the resort changed its name last year, was a magnificent mountain in the mid-1950s, with nothing more than a double chairlift, two rope tows and a small lodge. So it was a surprising international victory when the little-known destination was selected over renowned European resorts including Innsbruck, Austria, to host the 1960 VIII Olympic Winter Games on the western shore of Lake Tahoe.

These were the first live, nationally televised Olympic games, and the pageantry of the opening and closing ceremonies—orchestrated by Walt Disney—was especially designed for the lens of television cameras.

There were many important firsts introduced at the 1960 winter games, including electronic timing, mechanical grooming, instant replay and computer-tallied results, according to David Antonucci, author of Snowball’s Chance: The Story of the 1960 Olympic Winter Games, and resident of Tahoe’s west shore.

Antonucci has worked for years to preserve the history of the 1960 Winter Olympics by gathering facts for his book, collecting memorabilia and mustering support as president of the board for The SNOW (Sierra Nevada Olympic Winter) Sports Museum, which is targeted to break ground in 2025 at the Olympic Valley entrance on Highway 89.

While The SNOW Sports Museum is still on paper, there are two museums on Lake Tahoe’s west shore where you can learn about the region’s ski history and appreciate its Olympic spirit.

One is The Gatekeeper’s Museum, located in Tahoe City near Fanny Bridge. An exhibit there features some of Antonucci’s collection, including 1960 Winter Olympics clothing, flags and souvenirs, as well as the history of skiing in the Northern Sierra.

“It’s an eclectic collection,” says Antonucci. “Most artifacts and memorabilia from the games ended up in the hands of private collectors. We’re always on the lookout and adding items to the museum.” He keeps a keen eye open for an Olympic torch from that year, designed by a Disney artist.

The Olympic Museum, located at High Camp at Palisades Tahoe, features memorabilia from local athletes, news highlights and a hockey stick and puck from the 1960 Winter Games. Antonucci anticipates that both the High Camp and Gatekeeper’s collections will be housed at The SNOW Sports Museum.

Many of the Olympic artifacts, including 30 huge, Disney designed statues of athletes built from wire mesh, Papier mâché and stucco, were created as temporary structures, and were then removed, or they simply deteriorated following the games.

If you’re looking for lasting signs of the games in Olympic Valley, the most predominant reminder is the Tower of Nations structure which greets visitors at the entrance to Olympic Valley. It honors the 1960 competitors with emblems of their 30 countries and an eternal flame cauldron. Names of ski runs and Olympic rings throughout the resort are reminders of its storied history.

The star-shaped A-frame building near the resort’s parking lot was built as the Olympic visitors center, and the current Olympic Village Lodge was formerly athlete housing. Just west of the village is a small church with a sweeping “potato chip” roofline and glass walls that was built for Olympic guests. Blyth Arena, the iconic centerpiece of the games where the opening and closing ceremonies and ice skating events took place, unfortunately collapsed during the heavy snows of 1982-83.

“Many people don’t realize it, but there were actually more Olympic ski events on the west shore than there were in Olympic Valley,” says Antonucci. “Cross country was more predominant than downhill skiing.” 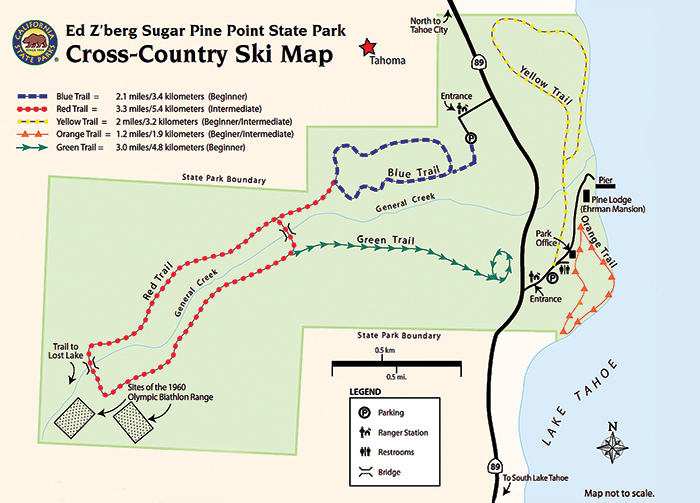 There were six cross-country ski races at the 1960 Olympics—four for men and two for women—staged on 57 kilometers of trails that fanned out between Homewood and what’s now the state park. At the time, the park land was privately owned by the Ehrman family, which joined other landowner to grant the use of their property for the cross-country events.

Temporary structures and biathlon shooting ranges along the course were removed after the games, leaving no trace of the site’s history. Look for an interpretive display located at the park’s barn/coach house, on the lake side.

You can cross-country ski, snowshoe, bike, run or hike along five trails. The longest trail, General Creek, is a nearly 3.5-mile loop featured in the men’s events, including the biathlon. All trails are beginner to intermediate levels and there’s signage along the way.

Before you visit in the wintertime, it’s good to note that the trails are not groomed after storms, so you may need to break your own track. Walk and snowshoe on the side of the trail. Trails also lead into the woods a couple of miles from the highway, where cell phone coverage can be spotty. So come prepared with a buddy, along with proper gear, water and food. Dogs are not allowed on the trails. A restroom is located on-site.

Park rangers and volunteers have led ski and snowshoe tours during past winters. Visit parks.ca.gov for maps and current activities at the park.