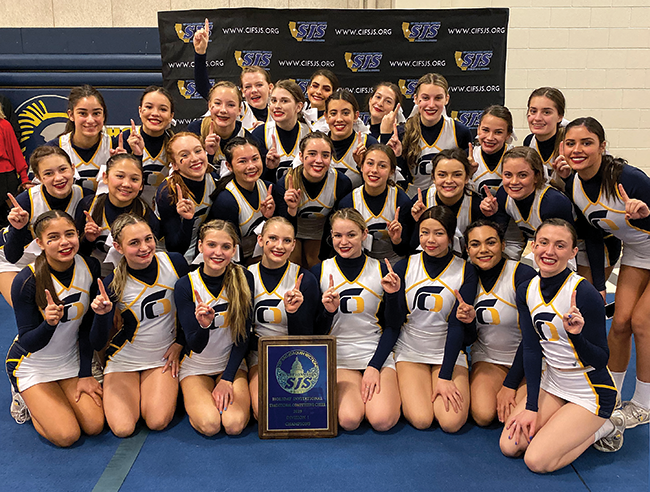 Training begins with summer camps in June, ramping up to six days a week, two and a half hours a day. Perseverance and commitment are absolute musts. Workouts are intense and physically draining; they include mastering stunts, tumbling skills and complicated choreography. Competitive cheerleading is a sport of champions in many ways, and the Oak Ridge High School (ORHS) cheerleaders proved themselves more than worthy in the 2020 National Championships held in Orlando, Florida this past February.

After placing in the top three in their division three times in the six years they have been competing at the national level, the ORHS cheer team won first place in the UCA Super Varsity Division I. Says junior Kailey Timms, “Competing is the best feeling ever because it’s all of the hard work you put into the season wrapped up in less than three minutes. There is nothing like the rush of putting it all out there on the mat. The championship is like the work of the past six seasons all paying off for one amazing moment that makes it all worth it.” 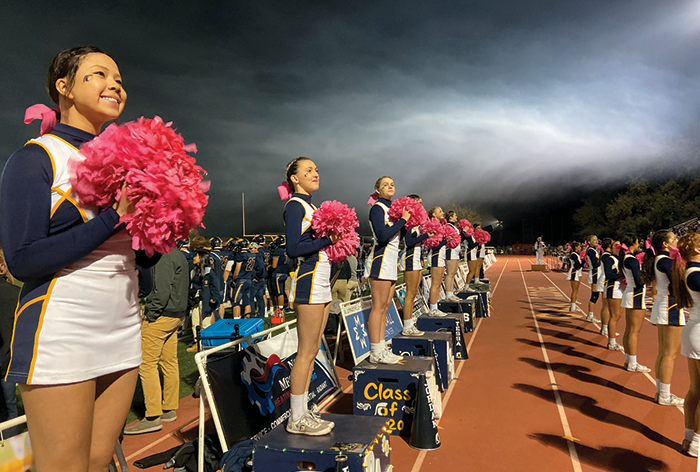 According to Head Coach James Blunk, who has managed the team since 2015, “We have the highest scoring difficulty in our team’s routine. Skill levels evolve and change every year, and we push the envelope and practice skills no one else has.” Bearing this in mind, the ORHS cheer squad’s accomplishment is even more impressive.

Cheerleading came to America from England in the late 1800s, consisting initially of Princeton University men shouting on the sidelines of football games. Inevitably, the sport’s evolution has been one of gradual and definitive change. From the originally male dominated roots to the inclusion 40 years later of women, the meteoric rise of competitive cheer has created a sport that showcases team spirit, athleticism, dedication and, above all, trust in your fellow teammates. Senior Tessa Roeder elaborates on that, saying, “My favorite part of this team is definitely the family atmosphere. We are all so close and that is what makes our team special!” 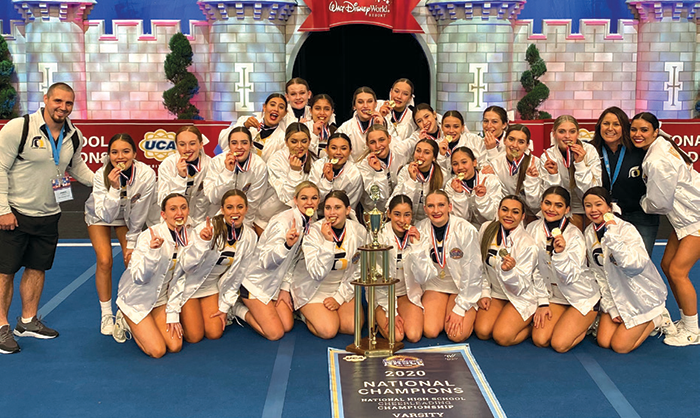 Recognized as an official sport in 1999, competitive cheer is overseen by the Universal Cheerleaders Association (UCA), founded in 1974 by Jeff Webb. Webb, chairman of the International Cheer Union, is also credited with changing cheer from a school-based endeavor to a competitive sport. Sideline cheer routines developed into challenging feats of tumbling, tossing, stunting and even “flying.” Rule changes over the last decade have generated more daring routines. “We have been able to add some things that were allowed in colleges,” says Blunk.

The rigorous training and practice required to make the grade as a cheerleader cannot be overstated. Charlie Brinkhurst-Cuff is a British former footballer and cheerleader who believes that, of the two, cheer is the tougher sport. In writing about cheerleading finally getting provisional recognition by the International Olympic Committee, Brinkhurst-Cuff emphasizes that it’s exceptionally difficult to “master the trifecta that cheerleading is essentially made up of [sic]: gymnastics, acrobatics and dance. Stunting—throwing people high into the air, catching them, and holding them above your head, safely—is no mean feat.”

In this vein, Brinkhurst-Cuff notes, “In 2013, it was named the most dangerous sport in America for women. According to the report it accounted for 66% of catastrophic sports injuries for girls, and 37% of the cheerleaders they studied had symptoms of concussion that hadn’t been reported.”

As with any sport, injuries can occur, but safety is a crucial and integral part of the training. According to USA Cheer, the national governing body for the sport of cheer, “Safety is paramount to the protection of athletes and a vital part of the mission of USA Cheer.” Coach safety certifications are mandatory for entry into competitions, and regulations are strictly enforced. 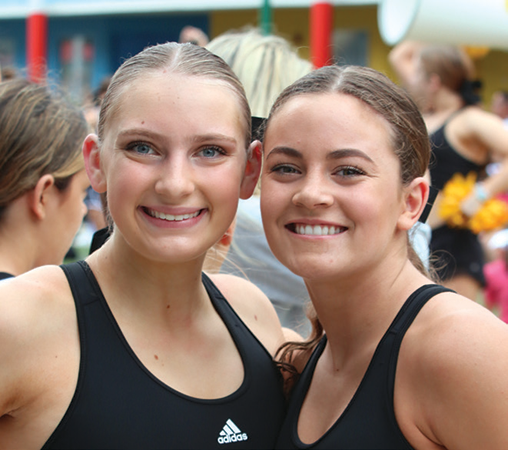 Because of the COVID-19 outbreak, safety instruction has been modified to be available online. According to usacheer.org, “With the recent COVID-19 health crisis and its effect on gatherings and travel, cheer coaches and officials have missed opportunities for rules and safety training at state and national conferences. . . USA Cheer will be offering access to comprehensive rules training through its education platform.”

Training has also been suspended due to COVID-19. Blunk says, “Everything has been put on hold. We’re all trying to adjust to the new guidelines.”

Unfortunately, the medical crisis also impacted the squad’s chance to celebrate their victory. “They couldn’t receive all the usual accolades, and they didn’t get a chance to celebrate together at a banquet with an awards ceremony,” Blunk notes. “We will have to special deliver the championship rings.”

The UCA National High School Cheerleading Championship is the most prestigious high school championship in the country, nationally televised on ESPN every year. The first UCA Championship was held in 1980 with only 20 teams competing. Held this year in Orlando, Florida, the UCA competition hosted 950 teams.

According to tv.varsity.com, “That’s 19,848 spirited athletes and 3,173 passionate coaches dreaming of white satin jackets!” In total, cheer squads from nine countries and 34 states competed this year. To clarify, the eponymous white jackets were introduced in the early 1980s to accompany gold medals, and they have been a coveted representation of cheerleading excellence ever since.

The ORHS squad is usually comprised of between 20 to 30 cheerleaders, and this year’s team had 28 members, with all high school grades from freshman to seniors represented. “[The COVID-19 crisis] is really hard for the seniors who deserved to celebrate with their team before they head to college,” says Blunk. 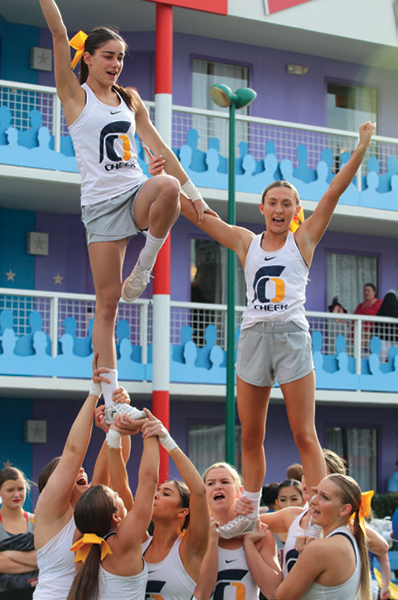 Nonetheless, the victory was a sweet reward. “Winning was absolutely amazing. I’ve been cheering most of my life, so for all of the years of hard work to pay off being surrounded by my teammates was a once-in-a-lifetime privilege I will never forget,” says Roeder.

Blunk, a former Sacramento State cheerleader and the college’s current cheer coach, has been an instructor with UCA for 10 years. His passion for both cheerleading and his team is clear. “Training is physically and mentally challenging. There is not one person on the team who doesn’t want to be there,” he says. Eighty cheerleaders have already registered for summer camps, but ironically, as a team, they have had to adjust to being apart. Says freshman Miah Baro, “My favorite part about being on Oak Ridge’s team was just getting to work with all my teammates and being able to have gotten such close relationships with many of them.”

This is sentiment is echoed by sophomore Mia Ricci, who says, “My favorite part was we were all there to do the same thing, and we had all the same goals.” 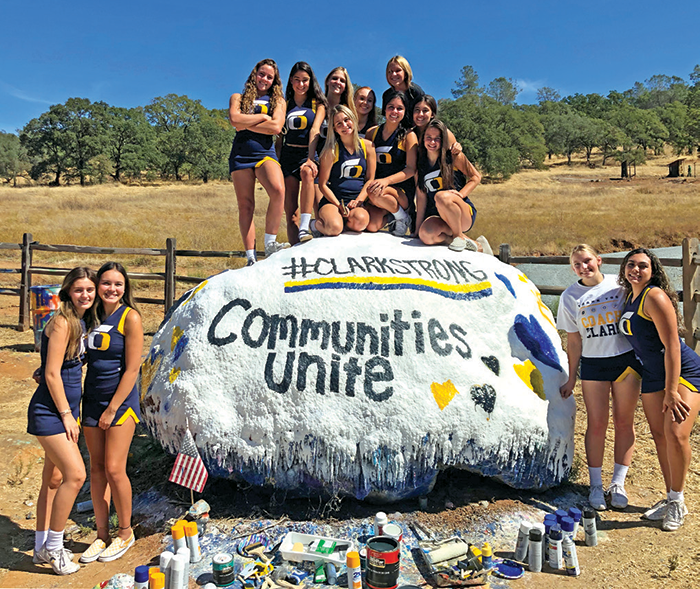 Blunk says, “Because we won the championship, ESPN televised not just part, but our entire performance.” The visibility and popularity of competitive cheerleading is growing by leaps and bounds, in more ways than one. For these cheerleaders, the common overriding passion is how much cheer means to them personally. “Cheer means everything to me. I feel at home on that mat and in the tumbling gym,” says Timms. “Cheer has gotten me through loss and pain and given me happiness and hope. Cheer is the best escape.”

A2 Milk From A2 Cows