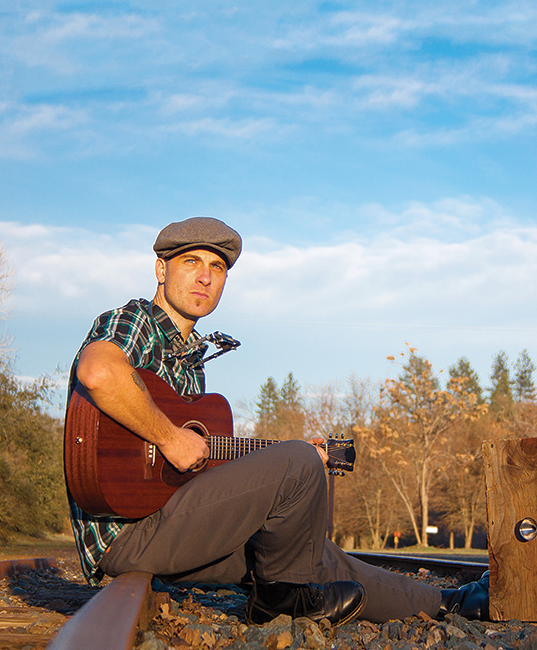 El Dorado County songwriter and performer Patrick Walsh is a musician whose work is difficult to classify by genre.

Walsh, a popular artist who performs at venues from Sacramento and El Dorado County to South Lake Tahoe, likes to switch things up with bluegrass, jazz and a reggae island vibe during every show. His quest for musical diversity is likely rooted from a lifetime of playing multiple instruments, including piano, trumpet, guitar and harmonica. And that quest could be fueling his current evolution, which focuses on performing Americana-inspired acoustic guitar instrumentals rather than singing and performing as a one-man band.

Walsh explains his approach was deliberate from the start. “As soon as I began performing
and creating albums, I decided I didn’t want to be held to one genre,” he says. “I like being spontaneous and hop styles from song to song during a performance.”

He’s transitioned to performing the instrumental versions of melodies he originally performed with lyrics, often recording himself playing rhythm guitar and then playing live guitar solos and melodies over the recordings. “People who know my music recognize the instrumentals,” he says.

“I try to set a mood and take people away on little journeys,” says Walsh. “That’s partly why I like instrumental music so much. I’m very happy with the lyrics of my songs, but instrumentals allow listeners to think about whatever, and pay attention to the music as much as they want. I don’t like to make music that is too intrusive—just something that fits pleasantly into daily activities like driving, where you can just sort of daydream along with it.”

A prolific writer, Walsh has performed and produced more than 60 albums of original music on his LoCal Music label, sold on his website and on Spotify, iTunes and Amazon. He records at his Hangtown Studio in Placerville. “I keep busy with recording,” he says.

Walsh finds song inspiration in the Sierra foothills, or in everyday experiences.

“I’m inspired by anything and everything in life including the daily grind,” he says. “I even wrote a song that sounded sort of like a love song, but it was about a fork. It was just to see how boring and mundane a topic I could take and turn it into a song.”

Walsh’s musical career has been anything but mundane. He began playing piano just after kindergarten, when his musically inclined mother enrolled him in lessons. By the fourth grade, he was playing trumpet in the school band, and by junior high school, he was writing his own music. Walsh continued playing both piano and trumpet through community college, and joined his brother-in-law’s rockabilly band as a rhythm guitarist at the age of 19. Walsh taught himself to play guitar, harmonica and drums. He’s delighted audiences by playing multiple instruments—sometimes at the same time—during performances.

Look for Walsh to be playing this summer at local venues throughout El Dorado Hills and Placerville, including regional wineries. For details, check out patrickwalshmusic.com.