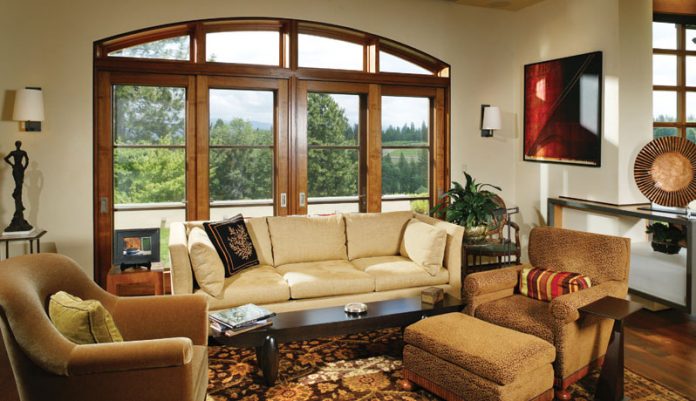 When Don and Katy Peek decided they wanted to build a home, they picked out a parcel not far from the Camino hilltop they chose for their first house in the early 1970s.

But when it came right down to it, they just couldn’t leave the land that had been home for almost 30 years. So they changed their minds about moving and stayed put on their hill. “We loved the location but not the house,” Katy says. “So we took that house down and built a new one.”

Designed by Seattle, Wash.-based architect Geoff Prentiss, the new home was completed in 2004. Its Kansas limestone exterior is so similar to stone you still can see on some of the older buildings in nearby Placerville that, at first glance, you think the house has been there for decades. Then you notice its postmillennial style. “He’s not a cookie-cutter architect,” Katy says of Prentiss, who designed a home for the couple about 15 years ago in Washington’s San Juan Islands. “He’s ingenious and inventive, and he asked us so many questions about how we were going to use the house.” The answers included lots of entertaining, efficient home office spaces for both of them and plenty of room for family when they come to visit. Another imperative: light. They both craved it. “The old house was very dark,” says Katy. “We wanted to get away from that.”

What Prentiss saw was that the old house largely missed the point of living on a hill surrounded by lush Apple Hill countryside. He decided the new house would be configured in an arc, enabling him to bring in the views and, at the same time, nestle the home into the slope.

The arc also freed Prentiss from the restrictions of an all-square-room floor plan. In his dynamic departure, he created four distinct “pods” that appear, from the exterior of the home, to be separate buildings. Once you’re inside, it’s obvious the pods are not separate but are linked by wedge-shape connector spaces that run from the front of the house to the back. Each is sheltered beneath a slice of roof made of Kalwall, a translucent, insulated building material that can be used for roofs, walls or skylights and allows filtered light, but not heat, into the house—a big plus.

The connector between the garage and the kitchen pods houses Katy’s office and a butler’s pantry. Another connector, between the kitchen and the living room pods, includes a light-drenched gallery and casual dining area. A library is tucked into the third connector between the living room and master bedroom pods. To visually echo the luminescent ceilings, Prentiss chose sand-colored limestone for the connector floors. The texture contrasts with the smooth, brown Brazilian cherry-wood floors in the pods. The opposition of color and texture creates a palpable effect as you walk through the space. “The connectors are light-filled and light feeling,” Prentiss says. “The pods are the more nurturing, warm spaces.”

Inside and out, the home’s signature elements are wood, stone and metal. Several of the massive wood beams the Peeks recycled from a defunct railroad trestle and used in their first home were re-recycled and put to work as ceilings in Don’s office and the dining room. That room, with stone floor, opposing walls of rough-hewn limestone, long wooden table and chandelier that looks like an elongated cluster of stout beeswax candles, evokes a vintner’s tasting room.

Other re-recycled timbers add warmth to the master bath, where two massive planks were joined to cradle an 8-foot slab of white marble with twin sinks. At one end, you can still count the rings of what must have been a gargantuan tree.

Wood, stone and metal play key roles in the kitchen, too. White marble counters and cabinetry of beechwood and burnished metal lend a contemporary spin. Katy really likes one particularly imaginative aspect of the design: a diving-board-size piece of beechwood that ingeniously “swings away” from the kitchen island on a metal post and, when needed, pinch-hits as a serving table or extra buffet space. Katy picked out furnishings for the home on several trips to San Francisco and also relied on Prentiss. “He has a great eye,” she says, adding that they both called on Laurie Ghielmetti Interiors in Pleasanton for a number of items.

The house, Katy says, was “intensely designed,” and everyone from the builder, Grendahl Construction of Sacramento, to the cabinetmakers, electricians and carpenters rose to the occasion. “Not a day goes by that you don’t appreciate what they did here,” she says. “We love it. Needless to say, we couldn’t be happier.”