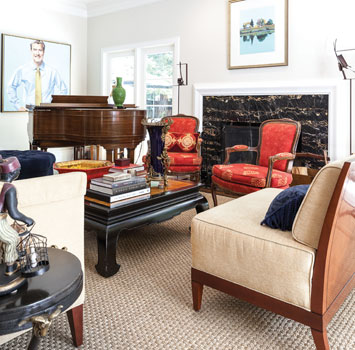 AIN’T IT GRAND!
by Catherine Warmerdam Good bones. That’s what Randy Reynoso and Martin Camsey saw when they first stepped foot inside the stately but neglected Monterey Colonial that they purchased in 2010. “We saw it independently for the first time and we both loved it when we came in,” says Camsey. Adds Reynoso, “There was just something about it. I fell in love with these spacious rooms.” The 10-person dining table by Michael Vanderbyl for Baker is surrounded by walls covered in sepia-toned hand-painted paper from Griffin & Wong. The chandelier, made of Czechoslovakian crystal, was installed in 1961. The sconces, from the 1920s, originally held candles but were wired for light bulbs.

Seeing LEDs in a New Light