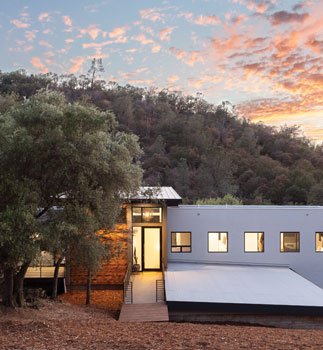 Tucked into a verdant hillside, this Newcastle home provides endless views of the great, wild outdoors.

Where most people zig, others zag. Ryan Vanni has been going his own way virtually his entire life: He got married at 18, started a business at 21 and had four kids by the time he was 28. So when he and his wife Melissa decided to build their dream home in Newcastle, Ryan turned to a young designer who’d worked on large commercial projects such as hospitals but had never designed a house.

Ryan, the 36-year-old co-founder of digital marketing firm BKWLD, found a kindred spirit in 34-year-old designer Matthew Lechowick. “He’s an up-and-comer,” Ryan says. “I’m self-made, so I liked the fact that he was new.” Ryan and Melissa had already purchased the 6-acre property when Lechowick came onboard. The plan was to build a warm yet modern family home, big enough for their four boys and for the large parties the couple likes to host. The Vannis agreed that Ryan would take the lead on the project, working closely with Lechowick and making most of the design choices. Ryan and Lechowick met weekly for more than a year at a downtown Peet’s to sweat the countless details involved in building a 4,300-square-foot custom home.

To start, Lechowick came out to the property to learn how Ryan and Melissa wanted to live in the house. They didn’t want something showoff-y. So the first decision was siting the two-story house at the bottom of the hillside, with a driveway that curves downward first one way, then another, so that the house reveals its pleasures slowly as visitors approach. The front door opens onto a grand, double-height space that includes the open-concept kitchen, dining room and living room—big enough for a lively house full of boys. The palette is soothing: white walls, dark floors, a black metal stair railing, black ceiling beams.

The entry hall serves as a decompression zone between the outside and the open-concept living space.

Views were paramount in Lechowick’s design. In the living room, 12-foot-tall pocket doors disappear into the wall to reveal an unimpeded vista of the lush hillside that rears up behind the house. Ryan and Lechowick fussed over the location of a pair of corner windows in order to get perfect sightlines of the Sutter Buttes at sunset.

The kitchen is modern and sleek. There’s a quartz-topped island with stools, and open shelving for dishes and glassware. Behind the kitchen, a butler’s pantry houses a second sink, two side-by-side refrigerators and small appliances like a coffeemaker, panini press and slow cooker.

The master suite is upstairs, off the great room. Downstairs are two bedrooms and two baths for the boys (they share, two to a room), a guest bedroom and a hangout space with a TV, sofa and long, built-in desk designed to get the kids out of their rooms. The furnishings are simple and modern: a reclaimed-hickory dining table by local artisan Steven Tiller, a large sectional sofa from Room & Board, pendant lighting by Brian Schmitt over the kitchen island.

Since moving in last July, the Vannis have hosted several large parties, including a gathering for their 8-year-old’s soccer team and 50 people at Thanksgiving. “The house held up and did its job,” says Melissa.

Ryan compares building the house to being an entrepreneur: “It was an incredibly creative exercise to put something on the planet that didn’t exist before.” In the kitchen, open shelving is efficient. “Cooking for four boys is like working in a restaurant kitchen,” says Melissa Vanni. “I wanted to be quick with the plates and cups.”

Like many creative millennials, Matthew Lechowick doesn’t put himself in a narrow box. Yes, he’s a designer, but he also teaches, does interiors and designs furniture. “It’s all about addressing people’s problems through art and design,” he says.

A UC Davis graduate, Lechowick got his master’s in architecture at Illinois Institute of Technology. While there, he took furniture classes and began dabbling in furniture design. Returning to Sacramento, he worked at a series of commercial firms and designed products like a clock without hands. (In 2013, he was invited to show his Reveal Clock and three other designs at the prestigious Salone Satellite trade fair in Milan.) Lechowick eventually left his day job and began teaching interior design and architecture—first at Cosumnes River College, then Sac State and UC Davis. He was still working on getting his architecture license when he landed the Vanni house project. It gave him the chance to show off his many talents: In addition to designing the house, he helped select paint colors, finishes and furnishings. He also designed a custom sideboard and entertainment unit, both made of walnut and perforated metal. “I felt the need to do it all,” he says. Seeing LEDs in a New Light