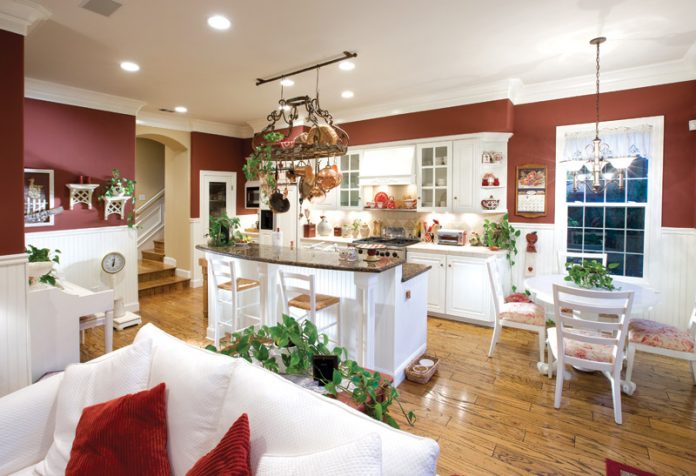 That the little worn-out house in East Sacramento had failed its termite inspection was fine with Mike and Kelly Paris.

“I was riding my bike by when I saw the house,” Mike remembers. “When I called about it, the Realtor told me it had just fallen out of escrow. I said, ‘I don’t care. I don’t want a termite inspection.’”

So with eyes wide open, the Parises jumped in and bought the house and its renegade lot of waist-high weeds. “It was a little shack of a house,” Kelly says, flipping through her “before” photos. “When I drove by for the first time, I said, ‘Oh, Lord, I can’t live in that.’”

The first project the couple tackled was a garage/guesthouse, complete with kitchen, living quarters and plenty of storage. That’s where they and daughter Molly lived for 18 months while they rolled back decades of neglect and turned the shack into a showplace.

“The interesting thing about this house is I designed it based on the footprint of the original house, which, we found as we got into the construction, didn’t have much structural integrity,” Mike says. “When all was said and done, the footprint was virtually gone.” In other words, there’s nary a trace of the squat one-story, 950-square-foot box that once was. In its place: a two-story, 2,845-square-foot, light-filled, traffic-stopping manse with a gabled front, peaks on the roof, old-world-style copper gutters and a landscape only a combination of passion and talent could create. Every inch of the house and linear foot of the yard show the Parises’ hand-in-hand approach.

“Mike would design something and I’d say ‘yea’ or ‘nay’ or ‘add this’ or ‘change this,’” Kelly says as she sits in her kitchen surrounded by gleaming white cabinetry and snappy red accents. And even though eight years have gone by since they finished the heavy lifting, the Parises are still not quite done. “We get bored all the time and change things,” Kelly says. In fact, a “little” remodel they completed last year added another peak to the roof.

At last count, Mike figures he has designed about six (or seven) houses. He estimates this was his third (or fourth). “I just like architecture; it’s a passion for me,” he says. Kelly, a former teacher, is a natural at interior and landscape design. Her eye for color, texture and placement—plants, furnishings, fabrics, whatever—make her casual groupings look like a million bucks. “I just do what I like,” she says.

With a master bedroom suite on the first floor, and the family room and kitchen open to the backyard and guesthouse beyond, this is a house made for easy living. Mike’s love of hardwood shows up in the crown moldings, bead-board backings, wainscotings, graceful staircase, meticulously mitered cabinetry and honey-toned oak floors. While the interior is roomy, it’s also intimate and hints at a keen understanding of the effect of scale on the human psyche. The ceilings are tall, yes, but they don’t make you feel small.

Molly’s bedroom and playroom are upstairs, and if she’s got a mind to, she can peek out at the backyard and pool from a balcony of hand-pounded iron made by her Uncle Scott. (Mike’s brother, Scott Paris, is the owner of High Hand Nursery in Loomis and a deft ironworker.) Another of Molly’s uncles, Steve Paris, designed and welded an arched trellis that is a focal point of the backyard. No, the brothers didn’t work together on the projects, “but they do share tools,” Mike says with a laugh.

The architectural term for the style that neatly envelops the home’s features remains elusive, so Mike is accustomed to a combination. “It’s very classic, very American, timeless,” he says. “But it also has a European flair.” Kelly puts it this way: “I wanted an old house but I wanted it new.” Whatever you call it, the house fits the neighborhood and stands out at the same time. “Just last Sunday, a guy stopped in the middle of the road and asked me where I got the copper gutters,” Mike says. The Parises frequently find notes on the porch asking about paint colors or where they got the trellis-fence that surrounds the yard. Walkers stop and study the driveway. It’s stained concrete, but instead of the usual straight-on grid, squares were poured into an eye-catching diamond pattern. To soften the look, Kelly wedged tiny plants into spaces between the squares.  It’s just one more way the Parises worked hand in hand to create a home that’s both chic and smart. “I think when you pay attention to detail,” Mike says, “it does really make a difference.”