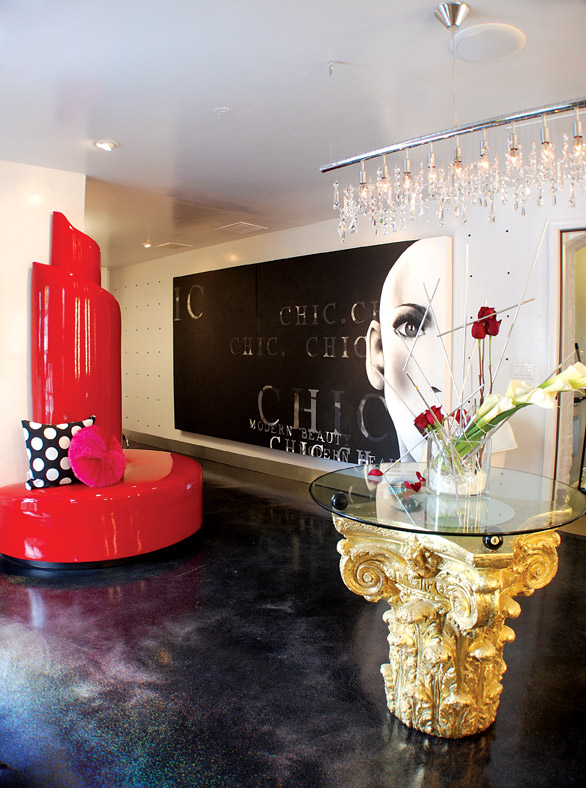 >>Midtown MakeoverAfter 12 years in the same location, hair salon owner Josey Hayes was ready for a change: a big change to a smaller space. I wanted something fun, exciting, eclectic, says Hayes, who owns Studio 28. I wanted to scale down and have something crazy. She was thrilled to find two 300-square-foot rooms in a renovated building at the corner of 28th and O streets, just a block away from her former salon.

What Hayes did right away:

What Trainor did: Had an opening torn through the wall, visually expanding both rooms. All the walls were painted a glossy white, and the concrete floor got a glassy black finish sprinkled with diamond dust glitter. Art consultant Chuck Miller attached a grid of black marbles to the walls, producing a 3-D effect.

Built-in function: Plenty of sleek white cabinetry from Ikea, hair dryers built into the ceiling and spring-loaded over the three stylists’ stations, a restaurant sink of stainless steel, and Italian roll-about cabinets to stash tools and products.

Icing on the cake: A luscious, lipstick-shaped red patent-leather sofa built into the dividing wall. All the glitz and glamour is really fun, says Hayes, but what’s really great is I have function, too. I absolutely love this place. I kiss it hello in the morning and kiss it goodbye at night. >> A New Spin on Downtown

While few would describe me as adventurous, I do have my moments. So when I found out that the company that leads comedy tours of Old Sacramento was now giving Segway tours of downtown, I wanted in&emdash;or, more accurately, on. I called for reservations and met tour company owner Paul Messier, a friend of his (an adept Segway rider) and a fellow first-timer at Cafe New Orleans on J Street between Front and Second streets. After signing waivers, watching a safety video and paying $79.99, I walked to a traffic-free parking lot and got my first glimpse of the two-wheeled electric personal transporter that was to be mine for the next three hours. I itched to grab the handlebars (oops&emdash;I mean LeanSteer stick), but first I had to pass Segway 101.

With the helmet and fluorescent vest Messier gave me securely fastened and an MP3 player to provide tour commentary strapped to my forearm, Messier showed me the ropes. After about 25 minutes of leaning forward to go forward, right to go right and left to go left, we were ready to roll. Messier led us single file out of Old Sac at a brisk 3 to 4 mph. His wife, Maureen, came along for the ride and was stationed at the back of the pack. We hit the sidewalks&emdash;that’s where Segways are allowed&emdash;and cruised by the Crocker Art Museum, Leland Stanford Mansion and the state Capitol. Our trek took us to an inn on 22nd Street between Capitol Avenue and N Street, where we had a break before gliding back to Old Sac.

Some people compare Segway riding to surfing or skiing. I don’t because I’ve never done either, but I finally got the hang of maneuvering the vehicle about halfway through the tour. (Messier is exceedingly patient.) When it was over, I was thinking that if I’d had another 80 bucks, I would’ve stepped right back on.

â€¢ To take the tour, you must be 16 or older and physically able to climb stairs without using a handrail.
â€¢ Wear sunscreen, sunglasses, comfortable clothes (nothing flapping or strappy) and flat shoes.
â€¢ Necessities: Your ID and credit card. Leave the big purse or backpack at home.

For more information and Segway FAQs, go to hystericalwalks.com.