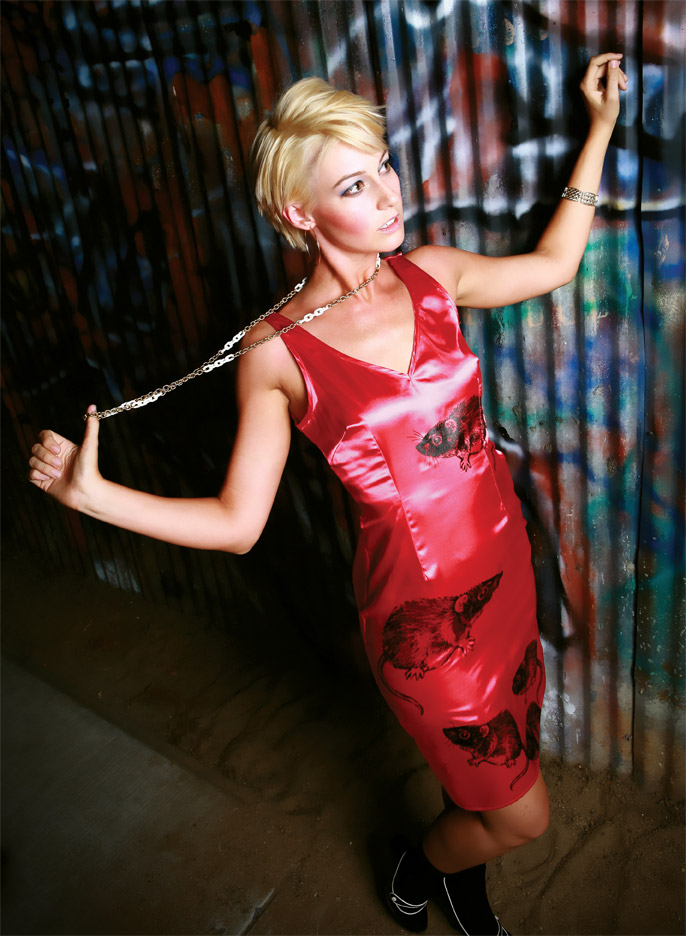 >>The Outskirts of ReconstructionNobody gets into Trisha Rhomberg’s midtown studio.

It’s so embarrassing, says the artist and clothing designer. You lit-
erally would not be able to walk in there. It’s madness . . . piles of clothes everywhere, silk-screening station in the corner, fans going, gas masks hanging. I have friends that still haven’t seen it. It’s so messy, it’s not even cute.

Not that Rhomberg is stuck on any traditional definition of that word. The skirts, dresses, jackets, boots and shorts that carry her Pretty Trashy clothing label sport silk-screen images of wart hogs, rats, flies, grotesques, guns, pirate ships, skulls and other not-so-pretty things.

Most of what Rhomberg creates is actually re-created. About 90 percent is vintage, she explains. I find it and hand-dye or reconstruct it so it’s more flattering: more current, you know. I love finding the right piece and reinventing it&emdash;making it new again. It’s almost like I’m
collaborating with designers from the ’60s, ’70s or ’80s.

While linking the word pretty with trashy may conjure images of the skanky or unkempt, Rhomberg says the name actually alludes to the recycling of the clothes. In fact, she does offer softer images&emdash;moths, birds, houses, clocks&emdash;on some of her pieces. But it’s the edgy stuff
that sells.

She peddles her wares on her website (prettytrashy.net), on eBay, locally at Olipom boutique (1115 21st St.) and at about a dozen stores across the country, as well as one in London. She recently auctioned a pair of black suede over-the-knee boots on eBay for $583. I was putting skulls on them and messed up, so I did this gold spray paint thing, and then scratched it off and then reprinted black skulls. The eBayers just went nuts. is fascinated by the panoramic view of history. I relate to big time frames, big concepts, says the new director of the history and railroad sector for the California State Parks Capital District. That’s perfect, because now it’s Hammond’s job to run the California State Railroad Museum and act as head honcho for the state’s historic parks in Old Sacramento, at Sutter’s Fort and in Jamestown at Railtown 1897 State Historic Park. How much bigger could his job get? Plenty. The biggest item on his agenda is the planning of a whole new museum.

Getting the Railroad Technology Museum done is extremely important, says Hammond, who has been at the railroad museum in Old Sac since 1997. It will have so much to do with our being able to talk not just about history, but about engineering and technology. While it’s expected that the new museum will be in the railyards north of downtown, it’s not a done deal&emdash;not yet.

There are two buildings we have our sights set on, Hammond says. One&emdash;the one which says Sacramento Locomotive Works on the side&emdash;is known as the Boiler Shop. The other is known as the Erecting Shop. We’ve been [leasing] these two buildings since the beginning of 2000, doing restoration and maintenance, and we expect to end up there, but it’s not definite yet.

In the meantime, Hammond keeps the wheels turning at the museum for the half-million visitors who flock there annually. Of course, he rides the train on his days off. I live in midtown, so I ride the light rail, especially on big event weekends, and I regularly take Amtrak when I travel to the Bay Area or visit my family in Southern California, he says. Trains are a great way to go.