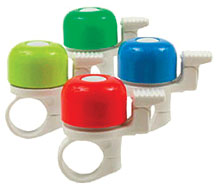 Gridlock, congested surface streets, temper-tripping traffic— who knows what downtown commuters will face when Interstate 5 shuts down for repair work this summer. Why not hop on a bike and be blissfully absent from the fuming throng of drivers squeezing through town? To get you geared up, we’ve done a little shopping.

• Biking is all about visibility. From sleek chamois knickers to sizzling pastel print jerseys, San Francisco designer Sheila Moon’s cycling garb is all about being seen. Available at Bicycle Chef Bicycles, 2409 J St., or sheilamoon.com.

• If you get one new bike toy this year, make it a neon-hued Incredibell, about $9 at City Bicycle Works, 2419 K St., or mirrycle.com • Check out the Trek WSD (Women’s Specific Design) bikes at City Bicycle Works. Assistant manager Zach Waddle suggests the 7100 ($359) if you want a good, solid commute bike. “These are great because you don’t have to dodge every pothole,” he says. For something a little more aggressive, Waddle points to Trek’s WSD 7.2 FX ($459).

• Electra’s Townie ($480) is a laid-back, three-speed ride with an elongated frame and “Flat Foot Technology.” “The cool thing about that is when you stop, you can put your feet on the ground instead of standing on your toes,” Waddle says. “Women love these.”

Just when you thought the glitter was gone from downtown development, here comes a bright spot: The old Cal Western Life building at 926 J St. is set to open this fall as The Citizen Hotel. It’s fun to fantasize about what will happen to that corner and block once the metamorphosis is complete, but in the meantime the epic task continues. “We’re not restoring a grand hotel,” explains Matt Harvey, creative director of Joie de Vivre Hospitality of San Francisco. “We are converting a historic building that was an office building into a boutique hotel. Obviously, we’ve had to bring it in line with seismic and infrastructure improvements we needed to do. It’s quite an undertaking, quite an extensive project.” Here’s what Harvey told us about the progress behind the chain-link.

What’s it look like inside? It’s a classic, classic building that was never designed to be a hotel, but that, I think, is what is giving us lots of opportunities. We’ve respected the bones of the building and we’ve inherited some interesting sizes and proportions . . . all the rooms are different. One of my favorites is the room that overlooks Cesar Chavez Plaza with a giant arched window that’s 8 feet tall. Some of the penthouse rooms have 16-foot ceilings.

When will it open? The projected opening date at this point is Nov. 8.