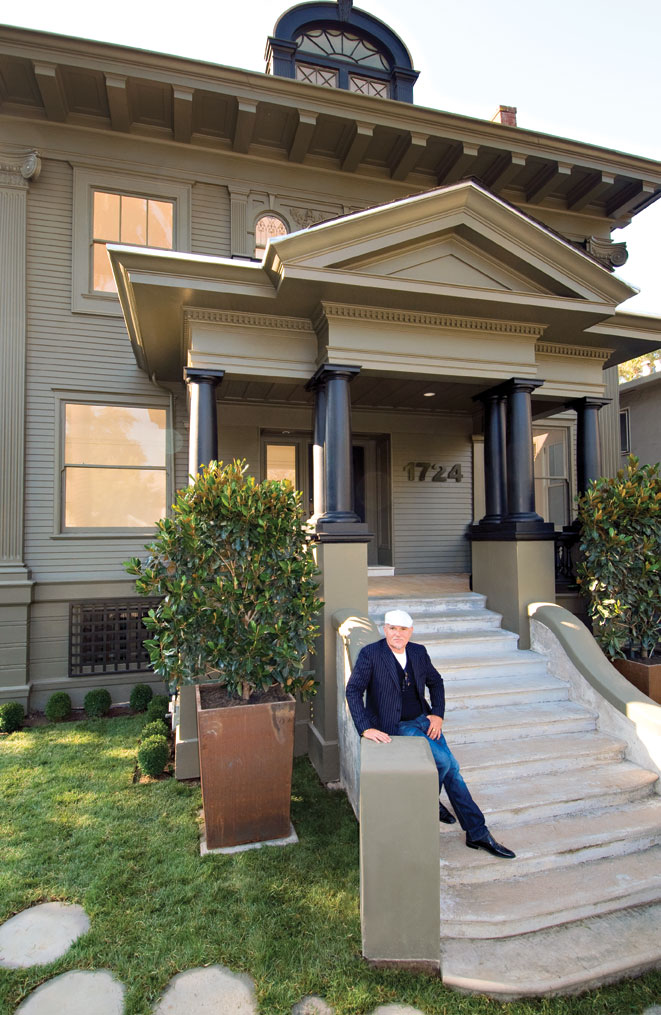 This fall, as construction crews swarmed everywhere from penthouse to garden, Jon Stevenson talked about his fresh take on the 1913 Colonial Revival mansion at 1724 N St. When he bought it in 2007, he remembers thinking, “Aha, great new corporate offices.” That would be for Trumpette, his designer baby clothing company. But even at 4,500 square feet, the house was just too small, and there were so many stairs. So Stevenson ditched that idea and came up with another. “I’m a visionary,” says the entrepreneur, whose former career was in San Francisco’s fashion industry. After a massive renovation that should wrap up this month, Stevenson plans for the house to become a private art gallery/special events venue. “It will be private, private, private,” he says. So you’ll need an invitation to get in. But, yes, he says, if you want, you can rent it for your wedding, your anniversary, for getting together with your friends. The first floor will hold 85 for a sit-down dinner, and the kitchen is equipped for caterers. Stevenson envisions brides and their families taking over suites on the second floor to dress for a wedding in the garden or in one of the elegant first-floor rooms. The groom and his entourage? They’d have the 700-square-foot penthouse. Stevenson says the house will have a sophisticated East Coast vibe. “The visuals are coming to me like that,” he says, snapping his fingers. “All of my lighting, fabrics, wall colors and art will be contemporary.” Does he have a name for the house? “Oh, yes,” he says. “I’m going to call it 1724.”  For more information, call (916) 442-4654.

Late last summer, the sounds of saws and nail guns rang out in a back gallery at The California Museum for History, Women and the Arts on O St., as a new 3,000-square-foot space was being constructed. It will hold the priceless and poignant mementoes gathered for this year’s Hall of Fame exhibits. “It’s huge . . . six times larger than the old space,” says Ashley Robinson, the museum’s communications manager. “Each of the inductees will have a dedicated space this time, versus upstairs, where they each just had a case.” The 2008 Hall of Famers are jazz musician Dave Brubeck, actress and activist Jane Fonda, Theo-
dor Geisel (Dr. Seuss), sculptor Robert Graham, music producer Quincy Jones, fitness expert Jack LaLanne, photographer Dorothea Lange, architect Julia Morgan, actor Jack Nicholson, scientist and double Nobel Peace Prize winner Linus Pauling, former California governor Leland Stanford and restaurateur Alice Waters. The new exhibit—actually 12 mini-exhibits—will open Dec. 16, the day after the inductees’ red-carpet stroll in front of the museum to the induction ceremony. Tickets to the ceremony are $25,000, but if you’re busy that night, adult admission to the museum is a mere $7.50. Among the items you’ll see: Dorothea Lange’s camera, Julia Morgan’s architectural model of Hearst Castle, Jack LaLanne’s exercise jumpsuit and Linus Pauling’s 1950s-era electric car. The California Museum for History, Women and the Arts is at 1020 O St. Call (916) 653-7524 or go to californiamuseum.org. Photo courtesy of The California Museum For History, Women and The Arts

Got money? Not enough? Then check out Smart Investing for Career Women, a free, no-reservations-
required, brown-bag lunch series at the Central Library. Held from noon to 1 p.m. on the first Wednesday of the month through October 2009, sessions will feature local financial experts. Can you bring your favorite guy? Um, no . . . because it’s just for women, explains Gary Shaffer, library marketing manager and chief writer of the program’s grant from the Financial Industry Regulatory Authority and the American Library
Association. “But,” he adds, “you could tell them they will be able to listen to it via podcast from our website.”

The Central Library is at 828 I St. For more 411, click on the Money Smart icon at saclibrary.org.