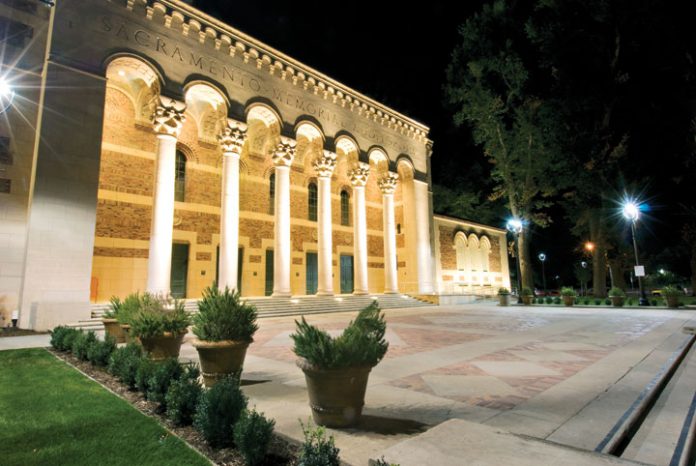 Even if it’s only the Big Dipper up there in the night sky, we still want to see it. That’s why all of the new pole lights, up lights, down lights and “wall washers” installed around the Memorial Auditorium earlier this year are “dark-sky friendly.” Part of a $2.1 million renovation project that included waterproofing the foundation, renovating the landscaping and replacing the lighting, the improvements were completed in May. James Benya, an architectural lighting designer and consultant based in West Linn, Ore., and Mike Neils of M. Neils Engineering Inc. in Sacramento collaborated on the “see the stars” lighting design. (One of Benya’s best-known projects is at the Palace of Fine Arts in San Francisco; one of Neils’ is none other than the Tower Bridge.) In addition to their dark-sky friendliness, all of the fixtures around the circa-1927 auditorium were chosen for efficiency and safety, says city of Sacramento theater/auditorium manager Bryan Chatterton. “We put together a committee when we started this process, and a lot of what we heard people say was they thought walking around the building at night was scary,” he reports. “Now, it’s so bright, it glows.”

As you read this, the first residents of Old Sacramento’s newest loft apartments should be settling into their digs in The Orleans at 1024 Second St. There are 24 residential lofts; eight are two-story (the fourth and fifth floors), and 16 (on the second and third floors) have 12½-foot ceilings. Several promise grand cityscape views from broad terraces and balconies made for people watching. Rents range from $1,500 to $3,100 per month. A restaurant and stores (no names yet) are planned for the 7,500-square-foot ground floor, and while the facade of the mixed-use building was created to look like the Gold Rush-era hotel that once occupied the site, everything inside is on the sleek side of 21st century. If you know someone moving in, walking shoes are the perfect housewarming gift. “You can walk to Raley Field, to the Crocker Museum, to the Capitol,” says Terry Harvego of Old Sac Properties, the developer, and owner of The Firehouse Restaurant. How did Harvego find out what people wanted inside? “We talked to a lot of people, and I think a lot of my friends got tired of me, but we came up with what I think is an exciting and unique approach.”