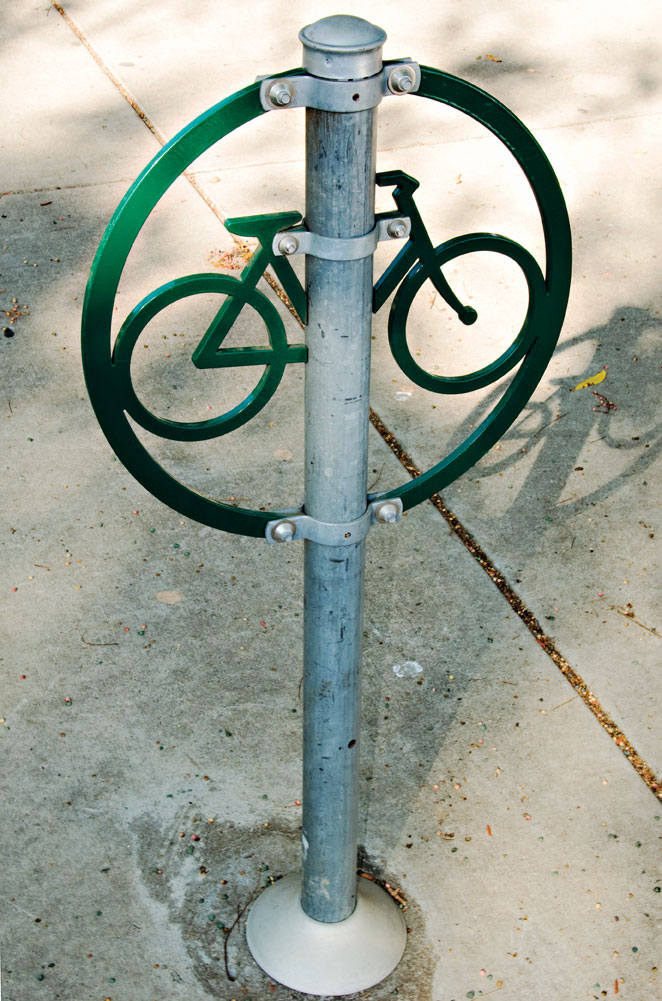 In these days of pricey gasoline, more diners are stashing the car keys and jumping on their bikes when they go out to eat. There’s just one problem: Parking can be a pain.

But that, thankfully, is starting to change. A growing number of local restaurateurs have hopped on the bicycle bandwagon by installing racks—a trend the city of Sacramento helped to foster earlier this year when it began converting dozens of old parking meters to newfangled “post-and-loop” style racks, mostly along J Street. For restaurant owners who lack city racks, however, finding the right one can be a challenge, says The Waterboy’s chef/owner, Rick Mahan.

“I’m not wild about the type of rack we’ve got,” he admits, referring to the green “loop-de-loop” structure that sits in front of the big picture window at his restaurant at 20th and Capitol. “I’m not even sure if this style [of rack] has a name, or how they work. They kind of mystify me.”

Still, people get creative when they want to park a bike, says Mahan, and his rack—whatever it’s called—is considered one of the “good” ones, according to Walt Seifert, executive director of Sacramento Area Bicycle Advocates.

A good rack, says Seifert:
• supports the frame of a bike in two places (so it can’t be easily
knocked over and the bike doesn’t need a kickstand)
• can be used with any kind of lock: U-lock, cable or chain
• is close to the business entrance and easily observed
• is identifiable as a bike rack

Mahan is evaluating other rack options for his soon-to-open East Sac restaurant, One Speed, whose name tells you a little something about its owner, a self-professed bicycle freak. “I’ve got a bicycle disorder,” he jokes.

At Ink Eats & Drinks in midtown, chef/owner Chris Nestor is opting for custom-made racks—“something with a little bit of art put into it, something a little wild, maybe something with flames in it,” Nestor says.

For Hot Italian, the new pizza and panini bar at 16th and Q, owner Andrea Lepore is importing three “cyclepods” that look more like modern art than bike racks, yet are “very functional,” according to Lepore, securing both frame and wheel. She’s also working to accommodate scooters and motorcycles by converting nearby car spaces into two-wheel parking.

While the gas crunch—and the resulting uptick in bike traffic—has undoubtedly inspired some restaurateurs to go the way of the rack, others, like Lepore, see it in broader terms as a commitment to what she calls “new urbanism: Making it easy for people to ride their bikes or scooters and motorcycles is a critical component in creating a walkable community.”

If you design it, says Lepore, they will come.