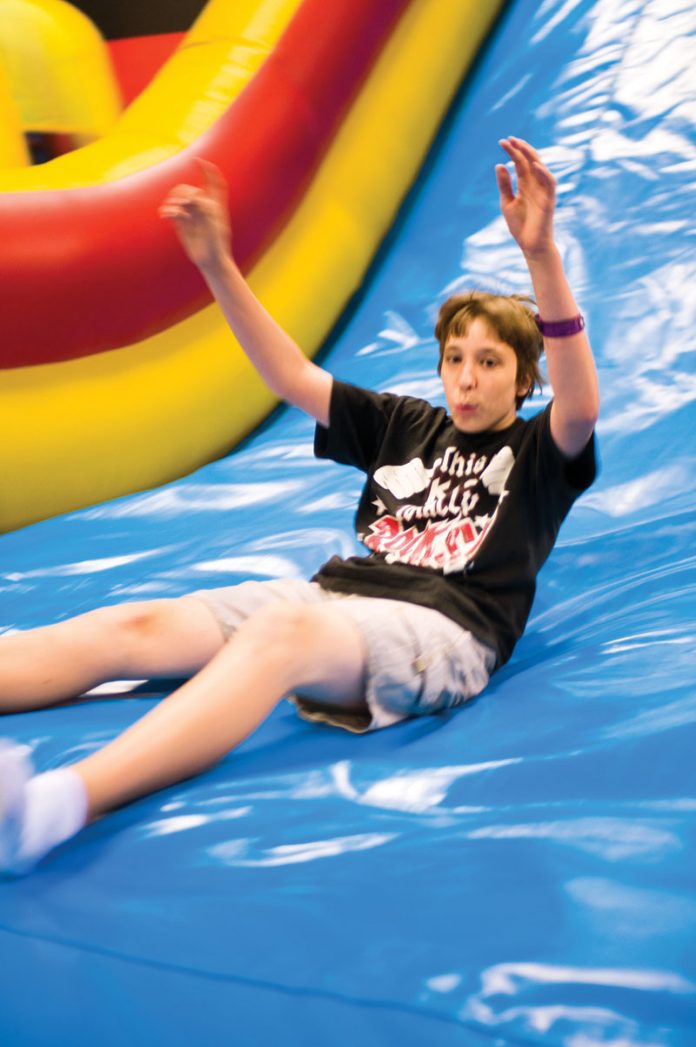 The number of children diagnosed with an autism spectrum disorder has exploded over the past decade. In response, more local businesses are starting to cater to these special-needs kids and their families.

It’s 6:30 p.m. on a recent Monday, and Michael Hamann is happy. “I’m excited,” says the autistic 16-year-old, wrapping his long arms around his dad, Jeff.

The pair are standing in the lobby of Bouncetown, which sets aside the first Monday evening of every month for kids with autism spectrum disorders. Jeff and his son have been coming to Bouncetown’s Special Needs Family Night since it started almost two years ago. “It’s nice to have some community with other people like us,” says Jeff.

Bouncetown, an indoor play facility located in an industrial park off Bradshaw Road, is one of a growing number of businesses that cater to children such as Michael and their families. In the Sacramento region, an entire industry has sprung up to offer services for this unique demographic. There are dentists who provide sedation and anxiety control. Attorneys who draw up special-needs trusts. Financial advisers who come up with long-term financial plans. Even a hairstylist who cuts autistic kids’ hair.

Nationally, catalog companies such as Beyond Play and Achievement Products peddle toys specially designed for these kids. The AMC movie theater chain holds monthly screenings of “sensory-friendly films” geared to autistic children, with the lights turned up and the sound turned down. (AMC doesn’t have any theaters in Sacramento; the nearest participating theater is in Manteca.)

Why are so many of these businesses popping up? In a word, need. According to the Centers for Disease Control and Prevention, nearly 1 percent of children in the United States have an autism spectrum disorder, a designation that includes autism, Asperger syndrome and PDD–NOS (Pervasive Developmental Disorder–Not Otherwise Specified, also known as atypical autism). That’s one in 110 U.S. children, a figure that has risen dramatically over the past decade.

“Sacramento has hundreds of special-needs businesses,” says Sue Cole, publisher of Sacramento Parent magazine. A year ago, she started publishing a twice-yearly magazine, Dandelion, just for parents of special-needs kids. The publication is chockablock with ads and also contains a lengthy resource guide that lists camps, child care providers, support services, consultants and other related businesses. Distribution has doubled, and it now has about 25,000 readers. “The response has been amazing,” she reports.

According to Cole, many of these businesses are flourishing because parents of special-needs children, and the children themselves, are hungry for the company of others just like them. The parents are looking for support and companionship, their kids for acceptance. Says Cheryl Goldfarb, who owns two Bouncetowns (one in Sacramento, the other in El Dorado Hills) with her husband, Bryan: “We offer parents a safe place where they can get support from other parents, and a good, safe place for their kids to play.”

Dave Gaines, a Sacramento behavior therapist, runs a local Meetup group for parents of children with autism. The group recently began meeting monthly with their kids at ArtBeast Studio in midtown. The children play while the parents visit. “It’s a comfortable, inclusive, accommodating environment,” Gaines explains. “Nobody’s staring at them. Nobody looks at them like they’re weird or bad.”

Jeff Hamann knows that feeling. “Autistic kids often do odd things,” he explains. When he goes out in public with his son, he likes to be surrounded by families like his own. That way, he doesn’t have to explain his son’s behavior or worry about other people’s judgments. “Everyone knows what’s going on,” he says. “It’s easier for the parents. We just shrug it off.”

Providing a place where special-needs kids and their parents feel accepted, it turns out, is a good business model. Vickie Sullivan, owner of Magic Smiles Dentistry in El Dorado Hills, estimates that 25 percent of her patients are on the autism spectrum.

She uses a variety of tactics to make the experience more pleasant for autistic children, who often have sensitivities to noise, sound and touch. She “blunts down” the treatment room by lowering the lights and turning off the music. She keeps a selection of “comfort items”—stuffed animals and blankets in different weights and textures—for patients to hold. She offers “look-see” visits before treatment and provides a series of photographs that show kids what they can expect when they go to the dentist. “They can come up to 10 times before they’re ready to sit in the chair,” says Sullivan. And for especially anxious children, she provides a menu of sedation options.

Cutting an autistic child’s hair can be almost as challenging as pulling a tooth. Hairdresser Amanda Nevel-Foster knows that from firsthand experience: Her autistic son was so resistant to getting his hair cut, she started giving him trims when he was asleep. “I figured there had to be an easier way,” she recalls. So she changed her approach, going slowly and letting him touch the clippers until he was comfortable with the process. Now, she gives haircuts to other autistic kids at Siena Salon & Spa in Fair Oaks. She does it only on Sundays, when the salon is closed. That way, the kids and their parents don’t have to worry about stares from other clients. She turns off the music and half the lights. If a child is spooked by the sound of the electric clippers, she uses a comb equipped with a hidden razor blade. “Haircuts are important,” she says. “I’ll do whatever works for the child.”

Some businesses, while they don’t specifically cater to special-needs kids, provide goods or services that parents find useful. One local mom of an autistic child knows all the best places to shop for gluten- and casein-free foods (which some people believe lessen autism symptoms). She ticks them off: Elliott’s Natural Foods and Grocery Outlet in Folsom; Target in El Dorado Hills; Gluten Free Specialty Market in midtown; Azna Gluten Free Bakery in Cameron Park. “We go to Azna several times a week,” says the woman, who didn’t want her name used, citing her child’s right to privacy. “My son loves the soy-free pumpkin waffles.” She also swears by Innovative Compounding Pharmacy in Folsom, where she gets all her son’s medicines—including ibuprofen—made to order without added sugar or fillers. “They work with families like ours,” she says. “They love my son. They let him sit in the back and pretend to be a pharmacist.”

People with special-needs offspring have their own unique needs that the marketplace is beginning to address. Kid’s Camp, a drop-in child care company with locations in Folsom and El Dorado Hills, welcomes kids with developmental disabilities such as autism. It counts about 10 families with special-needs kids among its regular clients.

Another growing business category: attorneys and financial planners who specialize in helping families with special-needs kids. “These parents carry so much stress,” says Michael Pearce, an estate-planning attorney in the Pocket who does a lot of work with parents of children with disabilities. “They worry: What will happen to my child when I’m gone? Who will take care of him?”

Pearce can help them create a special-needs trust so that their child, when grown, will have assets while still qualifying for federal benefits such as Supplemental Security Income and Medicaid. He also can draw up a conservatorship when a child reaches 18 if the child can’t care for himself.

Pearce doesn’t charge parents extra for the special-needs component of an estate plan. “I don’t think it’s fair,” he says. “They shouldn’t have to pay more than any other family.”

Pearce often refers his clients to the Merrill Lynch branch office in Folsom, which has its own dedicated special-
needs practice, called The Fiduciary & Special Needs Group of Sacramento. John Schoeppach oversees the group, which works with parents of special-needs children to secure their family’s financial future. “It is such a complex arena,” says Schoeppach, the office’s resident director. “This is a difficult area of business to get right. It’s always changing, and each family situation is different.”

Members of the Merrill Lynch group invest and manage money in a special-needs trust. They also work with couples on their own retirement plans, so that they are solvent enough to help their special-needs child for decades—even after the parents are gone. If a couple doesn’t have much means, says Schoeppach, one of the more common strategies is to fund a special-needs trust through a life insurance policy. “We help them cope and understand,” he says. The result? “They see how it can work when they’re gone,” says Schoeppach. “A good, well-thought-out plan gives families peace of mind.”

For Goldfarb, the Bouncetown owner, running an autism-friendly business is now a personal as well as a professional cause: Her son was recently diagnosed with high-functioning autism. On the night of Jeff and Michael Hamann’s visit, she’s disappointed to learn that another local indoor play business, Wacky Tacky in Roseville, has stopped holding its own special-needs family night. Goldfarb sighs. “I was hoping to take my kids,” she says. “There are a lot of things out there, but not as many as I’d like.” She shakes her head sadly. “As a parent, I’d prefer to have more options.”