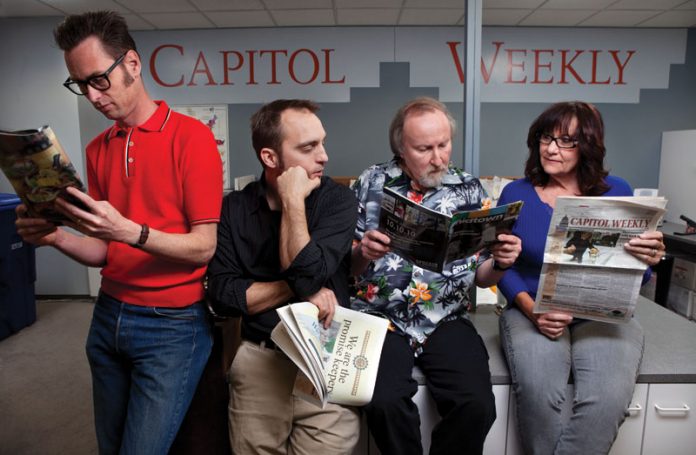 John Howard does not have an office. He has a cubicle, no more special or spacious than the other cubicles at the headquarters of Capitol Weekly, a local newspaper devoted to covering state government and politics for which he is editor in chief. Howard worked alone one recent Friday morning, posting a story on the web during one of the paper’s quietest days of the week. Then again, considering that the Capitol Weekly newsroom employs just two and a half staffers, the office—on the ground floor of the US Bank Tower in downtown Sacramento—is pretty sparse even when everyone is present.

The Weekly plays a unique role in the Sacramento journalism community. It is tiny—circulation a mere 5,000, with virtually all papers sold (at $3.95 an issue) within walking distance of the state Capitol—but it also is well known and respected among the state’s power brokers. It publishes 20 pages of newsprint every Thursday, and its website increasingly drives its editorial mission by allowing the staff to post stories when they break.

Stories such as the one in March examining the popularity of Gov. Jerry Brown’s proposal to do away with redevelopment agencies. Or the one that same month exploring the embattled city of Vernon’s decision to hire high-powered lobbyists. Or any of the stories from the past five years probing the state’s confusing and often maddening budget negotiations and legislative maneuvering.

Howard describes the paper’s audience as elected officials and their staffs, lobbyists, trade associa-tions and their members—about 15,000 to 20,000 people total. The Weekly’s website, which includes all the news, op-ed and features that make up the paper along with breaking news and a searchable index of past stories, grabs between 4,000 and 5,000 page views a day, he adds.

Howard, who says he has a “wire hack background,” spent 22 years as a political reporter for the Associated Press. He joined Capitol Weekly in the summer of 2005 as managing editor when the York family bought the paper. (Arnold and Karen P. York took the reins as publisher with son Anthony serving as editor.) When Anthony York joined the Los Angeles Times’ Capitol bureau this past December, Howard took over as Capitol Weekly’s editor in chief. (The Yorks still own the paper, and Anthony continues to write for PolitiCal, a joint
Times-Capitol Weekly blog.)

“The Bee will do a story quickly,” Howard says, “but then it’s done. Two weeks later, we’ll have a story that gives detail and larger, in-depth treatment. We were a tip sheet at first, but now our stories tend to ripple. More people call us than ever, because there are fewer reporters [covering the Capitol] than ever.”

That being said, there also are more blogs and websites dedicated to Capitol politics than ever—CalWatchdog, Calitics, CalBuzz and FlashReport, to name a few. Instead of offering punditry, Capitol Weekly takes a nonpartisan, non-ideological approach to the news. Yet it also runs numerous opinion commentaries every week, as well as popular, specialized features such as Ask Big Daddy, a humorous advice column written by the “ghost” of the great pol Jesse Unruh. (Howard would not divulge the name of the column’s actual author.)

“They have a significant niche as an insider political newspaper,” says A.G. Block, the associate director of UC Center Sacramento and a member of Capitol Weekly’s advisory board. “They write for a much more sophisticated audience than The Sacramento Bee or the Los Angeles Times. By sophisticated, I don’t mean more educated—I mean the audience knows the lay of the land. They’re a tougher audience, in that sense. Capitol Weekly has to go deeper into stories, and they’ve done quite well.”

In fact, the paper’s niche used to be even smaller. Before the York family’s Political Pulse, Inc. bought it, Capitol Weekly was pretty much just pages and pages of state government job listings. (Those listings, long a feature of the paper, ended about six months ago, Howard says, to free up space.) The newsroom had four staffers, but the recent recession led to cuts that left Howard with just himself and Associate Editor Malcolm Maclachlan as full-time staffers and freelance Contributing Editor Greg Lucas. All three have extensive mainstream journalism experience and write multiple stories a week—a typical workload in today’s shrinking newsrooms.

“The Yorks transformed the paper into something relevant with nice, lively features,” says Ray Sotero, a legislative staffer who recently penned an op-ed for the paper on the legacy of the late state Sen. Jenny Oropeza, D-Long Beach, who he worked for as press secretary in her Capitol office. “No other paper does what they do.”