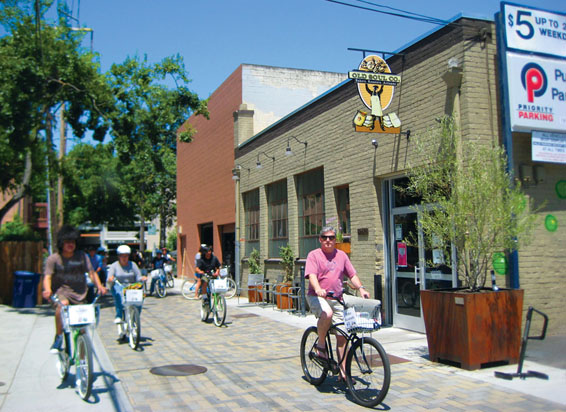 In Sacramento’s alleys, most people see only grit and garbage. Jeremy Drucker of Stitch Development and local activist Julie Young see magic. The two are leading a crusade to turn the city’s drosslike corridors into civic gold. “Our emphasis is on small things done well,” says Young of the nonprofit  Alley Activation Alliance. Here, a guide to Sacramento’s up-and-coming alleyways.

The Alley That Started It All (17th and L streets)—Five years ago, renegade coffee roaster Old Soul Co. set up shop in an alley-fronting warehouse, whetting civic appetite for righteous brew and out-of-the-box development. Bike delivery service Edible Pedal has since moved in next door, and Stitch Development recently built a trio of model homes across the way. Today, the lane is considered the “open-source template” for development of the city’s alleys and small urban spaces.

You Can Live Here (17th and L streets)—It’s a building! It’s a movement! It’s two things in one! Unveiled by Stitch this spring, three residential units carved out of 63 feet of alley frontage serve as demo projects that can be replicated on other alley lots. Priced from the low $200,000s, the model homes have a wallet-friendly Ikea vibe. A tip of the hard hat to the public works department for the alley’s eco-friendly permeable paving.

Rooms With a View (Seventh and K streets)—Local developer Bay Miry plans to take one of downtown’s seediest blocks and turn it into an entertainment/residential complex with 65,000 square feet of commerce. Many of the project’s 137 apartments will have alley-facing patios.

R Street Ruralism (26th and R streets)—With its dirt lane, wire fences and waist-high weeds, this back-street stretch is a little slice of hillbilly heaven in the heart of the city. It’s slated for a hipster makeover by Drucker and crew. 9 on F: Proof Positive (14th and F streets)—When Drucker and architect Ron Vrilakas completed this nine-unit, “green”-certified complex three years ago, they figured the trio of alley-facing pads would sell last. Instead, they were snatched up first. “It was kind of a lucky find,” says resident Martha Goodwin, a medical technician who recently relocated from Vermont.

can transform an alley in the blink of an eye. The latest addition to this spot: a Southwestern mural, topped with metal sculptures of cacti and aloe vera plants. The effort has not gone unnoticed by local squatters, who’ve taken their needles, beer bottles and other debris elsewhere, says property owner Thomas Roth of Midtown Alley Project.

Restaurant Row(ette) (16th and P streets)—San Francisco has its share of alley cafes. Sacramento may get its own mini version of Belden Place in the alley behind the proposed Gateway on Fremont Park condo project, a few doors up from Hot Italian. Stay tuned.

Meet Mr. Alley
Sacramento’s alley champions include some local Big Names: architect Ron Vrilakas, developer Ron Mellon, urban designer Greg Taylor. But Jeremy Drucker of Stitch Development is considered the original visionary. The Bay Area developer, who studied at UC Davis, loves the “unscripted” nature of back-street alleys. “In Paris, the Champs-Élysées is great, but the neighborhoods I remember are the ones you happen upon and find for yourself,” he says.

Naming Rights
How do you distinguish all those anonymous alleys from one another? The City Council briefly considered naming them after Sacramento’s sister cities and other exotic locales. But after deciding that names such as Jinan (China) and Liestal (Switzerland) were too obscure, the Council sent city planners back to the drawing board. As of now, it still hasn’t figured out what to name these lanes.