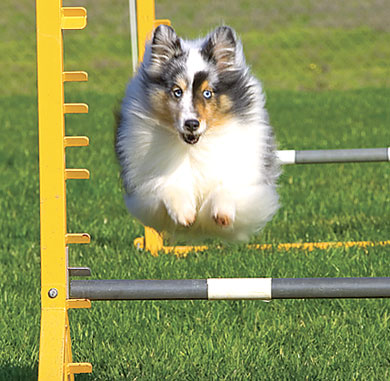 This may be the Year of the Dog by the Chinese calendar, but in Sacramento, dog lovers will tell you that every dog has his day, every day.

For those who love sharing their lives with their dogs, few places can compete. Within the Sacramento metropolitan area are countless dog-friendly businesses and recreational facilities, from specialized boutiques and bakeries to luxury boarding facilities, dog day-care centers and dog parks.

WHEN IT COMES TO LISTING DOG-FRIENDLY amenities in the Sacramento area, though, veterinary medicine would have to be at the top. Perhaps no area in the country offers a greater breadth and depth when it comes to pet medicine, with everything available here from the latest in high-tech care to the most ancient of healing traditions.

But then, Sacramento has always had the best in its own backyard when it comes to pet health care, thanks to the University of California, Davis. The university’s School of Veterinary Medicine attracts top veterinarians and promising veterinary students who tend to stick around even when no longer affiliated with the university.

“It’s the university that drives veterinary medicine in this area,” says Dr. Signe Beebe of Integrative Veterinary Center in East Sacramento. “People have the ability to exercise all available medical options for their pets here. That’s what anyone could wish for themselves.”

Dr. Alton Raymond of the Animal Wellness Center in Davis has been practicing in the Sacramento area since 1978, and he remembers a time when what some might call a more “practical” approach to dogs and their care was common.

“Sacramento was at that time kind of a big farm town,” he says. “It was hard to even get people to bring their pets in for vaccinations. The attitude of many people was, ÔIf the dog’s really sick, put him down.'”

That attitude is far less common today. Raymond and Beebe are among local veterinarians working to fill a niche in pet medicine. Both offer acupuncture and herbal medicine in their practices, and Beebe also provides physical therapy in a warm-water treadmill tank to help dogs recovering from surgery or debilitated by old age.

For those who want the best in Western medicine, in addition to the Veterinary Medical Teaching Hospital at UC Davis, the Sacramento area boasts specialty practices filled with veterinarians board-certified in oncology, cardiology, surgery and more. The latest of these centers, the new Northern California Veterinary Specialists in Greenhaven, has the high-tech equipment and star-power veterinarians necessary to attract clients from up and down the West Coast.

“We put it on the I-5 corridor to make it easy for people to get to,” says Dr. Melinda Van Vechten, a veterinary oncologist who has staked her financial future on the high-tech hospital, which has both a CT scanner and a nuclear accelerator, plus a surgery suite that’s human grade in every detail.

Such top-notch veterinary care, in all its variations, is wonderful when the need arises, but most people likely would rather think about the healthier aspects of having a dog. And in this area, Sacramento ranks highly as well.

SACRAMENTO IS HOME TO PEOPLE active in a large variety of canine competitions, including dog shows, agility competitions and such breed-specific challenges as herding and hunting trials. It even has at least one world-class competitor: North Highland’s Katherine Leggett, who, along with her Shetland sheepdog Heather, is a two-time American Kennel Club agility national champion and five-time member of the United States Agility Team.

“We decided this was the place we wanted to be,” she says. “Sacramento-really, all of California-is just a hotbed of agility competition. Part of it’s the weather. You can’t quite train year-round, but you can train more here than in other parts of the country.”

FOR PEOPLE WHO’D RATHER SHOP than compete, the area has its share of dog boutiques and bakeries, with high-end goodies for those who want something just a little more special (and often, more pricey) than what’s offered by the big-box pet-supply stores. Retailers like Scraps Dog Bakery and Nutrition Center in Fair Oaks appeal both to a dog lover’s sense of whimsy and the desire for high-end pet nutrition.

Scraps owner Julie Nelson walked away from a career at Intel to open her store almost two years ago. “We offer holistic foods and gourmet dog biscuits, natural shampoos and upper-end dog toys, dog apparel, even sunglasses and hats,” she says. “The dogs do most of the shopping. The dogs know where they are and come flying out of the car.”

Boutiques and bakeries aren’t the only dog-related businesses in Sacramento that didn’t exist a generation ago. Add in such establishments as Launder Dog, a do-it-yourself dog wash, and Cha Cha’s, which provides day care for dogs, and you’ve got a good local representation of the hottest trends in the multibillion-dollar pet industry.

Even the traditional boarding kennel has gotten a modern makeover with the opening in West Sacramento of Wag, which offers suites for its canine guests. Wag’s Joel Leineke left the construction industry to open the business, taking a good hard look at the dog-loving demographics of the area before he did so.

“Sacramento is one of the top 20 (U.S.) cities for dog ownership,” says Leineke, who brings Buddy, his 105-pound yellow Labrador retriever, to work with him every day. “There are lots of animal lovers in Sacramento. And there are rivers, lakes, dog parks. It’s a really terrific place.”

BUT WHEN YOU ASK SOME DOG LOVERS about those rivers and dog parks, you do hear voices of discontent. Sacramento County has a leash law that requires dog owners to keep their pets under their “control” at all times outside of designated off-leash areas. Although almost everyone seems to agree that the addition of small, off-leash fenced areas in local parks is good for dogs and the people who love them, many dog lovers don’t think the Sacramento area has done enough to make the most of its natural advantages when it comes to off-leash recreation.

“The problem with a dog park is that it’s like a prison,” says Don Linville, owner of both a retriever named Henry and a business named after him: Black Dog Studios. “You take your dog to a dog park and he’s either going to get humped or beaten up. Some of the dogs go so often they become territorial gangs, and some of the people are so clueless they don’t notice what their dogs are doing.”

In other areas, such as the East Bay and San Diego, large areas of parkland are set aside that are more like open hiking areas than the undersized and overused enclosures typically used as dog parks. In the Sacramento area, dog lovers look to the area’s greatest natural attribute, the American River Parkway, and wonder why the same can’t be done here.

“It’s ridiculous that America’s most popular dogs are Labrador retrievers, and there’s no place allowed for them to swim here,” says Jackie Kuhwarth, president of the Sacramento Dog Owners Group (SacDOG). “The parkway has 4,000 acres and more than 40 miles of river frontage, if you count both sides of the river. We’d be happy to get a small part of it, even 100 acres, and we wonder why all we get is reasons why we can’t.”

SacDOG has been asking for use of a small part of the river parkway for six years. Advocates argue that setting aside a portion of the parkway for an off-leash area would clean up the problems caused by the illegal off-leash dog walking that’s currently practiced along the entire length of the parkway. A set-aside, they say, would allow for the kind of peer pressure that has proven successful at the Point Isabel off-leash recreation area near Richmond and on San Diego’s Dog Beach. Both areas have proven to be immensely popular with relatively few problems: Point Isabel, which opened in 1987, draws more than a million human visitors a year, and at least that many dogs. In both places, visitors support dog-friendly businesses nearby.

“Those off-leash areas have incredible user groups,” says Kuhwarth, who has more than 2,000 signatures in support of an off-leash area along the American River for hiking and swimming. “We’re ready, willing and able to step up and do the policing. Having a good users group will make dog lovers good stewards of the parkway, and make it safer and cleaner for all.”