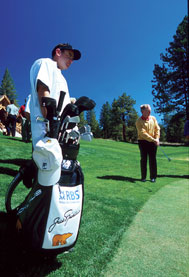 The stark heat of the Sierra summer seared my shoulders as I watched world-reknowned golfer Jack Nicklaus check out his new Signature course, Old Greenwood, near Truckee. The long-awaited golf course’s official opening had a couple of dayÕs worth of grand festivities underway, but Nicklaus was the star hundreds of people came to see. His son Jack Jr. joined him, and Northern California Golf Guide features writer Bob Burns accepted the assignment of caddying for Jack Jr. as both Jacks played an inaugural round. Bob got the inside scoop (see page 20), and we had our opportunity to see the Nicklaus game firsthand.

Watch Jack Nicklaus Sr. play golf for a few minutes and you quickly realize that these guys are different. After a morning full of press conferences, handshakes, autographs and interviews (and some fly-fishing the evening before), Jack strode onto the practice green, still in his street shoes (or dare I say ‘jet shoes,’ as he tends to his business interests in his private jet).

Saying he’d only played a couple of times in recent months, the Golden Bear plopped two balls onto the green about 40 winding, sloping feet from the cup. Bending into his trademark, nearly-half-bent position, he picked his line and stroked it. No practice strokes, no pacing or squatting for a read. I stared as the ball gently and evenly paced itself toward the hole, and rolled to a stop about two inches to its left. He immediately stepped up to the next ball and did the same, this time watching it pop into the hole. Applause erupted from the quiet crowd. Easy game.

The skills Jack showed a few yards off the green were no less impressive. Two practice swings with a wedge, then he quickly lofted two balls toward a cup only five downhill yards away. They arced up and down, the first rolling gently into the cup. The second stopped a foot or two past.

Then it was on to the first tee. There, Caddie Bob nervously began his bag-carrying duties as the two Jacks performed for the crowd, hitting off a couple different tees with 3-irons and old and new drivers. Whereas any 5 shots I might hit would launch a pattern akin to a ‘patriot-size’ box of fireworks set afire, the balls the Nicklauses struck had an identical sound as they came off the club face, and their ball flight scored the same inch of the bright blue mountain sky. Likewise, each landed in almost precisely the same spot, except when the Nicklauses announced a different objective beforehand, such as an attempt to hit a draw or fade, land somewhere else, or get more roll. Striking a golf ball well is not unlike mastering a dance step or shooting a basketball: When done right, it looks simple and easy.

I hope you enjoy this ninth edition of the Northern California Golf Guide.