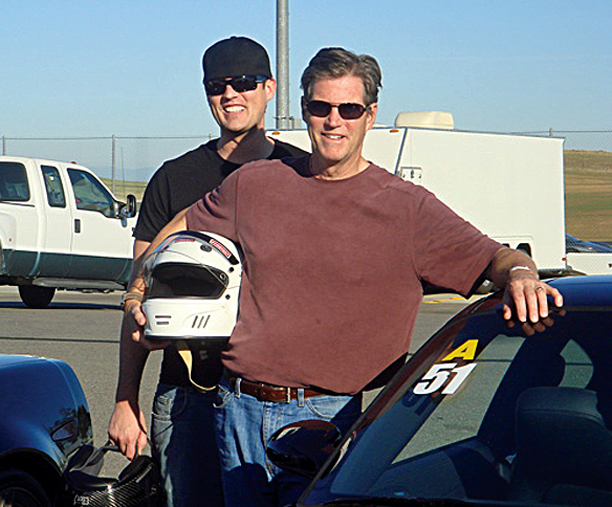 As I accelerated out of the turn, I could see the driver’s blond hair in my rearview mirror, her BMW nearly touching my bumper. I was determined not to let her pass, my Porsche 911S more than a match for the 635 convertible she drove. On a public road, a corner as tightly angled as the one we were maneuvering would be marked with warning signs and a 20 mph speed limit, far lower than the 67 mph on my speedometer.

It was our fourth on-track session of the day at Thunderhill Raceway Park in Willows. Though fatigued, we drivers were revved up, showing off our new driving skills on the three-mile track’s 15 turns. About 80 drivers brought their cars that day to the Hooked on Driving school, an impressive array of Porsches, Ferraris, Corvettes, Mustangs, Minis, Audis, Nissans, Mazdas and BMWs.

Drivers are separated into four classes based upon ability and experience, and spend the day on the track and in class learning safe driving, high-speed techniques and how to push cars to their stability and speed limits. Students have a personal “coach” or instructor in the car with them throughout their time on the racetrack, and helmets are mandatory.

This time on the track, our class drove harder, focused on being the passers, not the passees. I admit that I was further motivated not to be passed by a woman; sexist and stupid for sure, but true nonetheless. Fortunately, I managed to stay ahead of the blonde in the Beamer until a few turns later when she nearly lost control and passed me on the right—critical errors in judgment and safety.

During my track time, I felt a combination of exhilaration and terror, despite the presence of Alan, the skilled and attentive coach in my passenger seat. My son, Sean, 25, and, like me, a fan of high-performance cars, had previously attended the Hooked on Driving program at Thunderhill, and enjoyed it so much that he demanded I go. I am thankful he talked me into it and joined me that day on the course. I have been a big fan of Porsches since my sophomore year at UCLA (1969), when a friend let me borrow his ’65 Porsche Roadster for the weekend. I have since owned a few Porsches, but rarely pushed them to see what they can do. I now realize that everyday driving only utilizes a small fraction of a car’s capabilities. I also learned that such performance is only properly realized on a special course, not public roadways.

Life is full of surprises, and my day at the track was a delightful one. Beyond what I learned about driving and pushing (both my car and myself), I realized how much we learn from our children. Isn’t it supposed to be the other way around? My son has helped me learn things about myself, about contemporary life and, now, about high-speed performance driving. So I didn’t mind it too much when he signaled and roared past me in his Corvette on the straightaway. It was inevitable, wasn’t it?