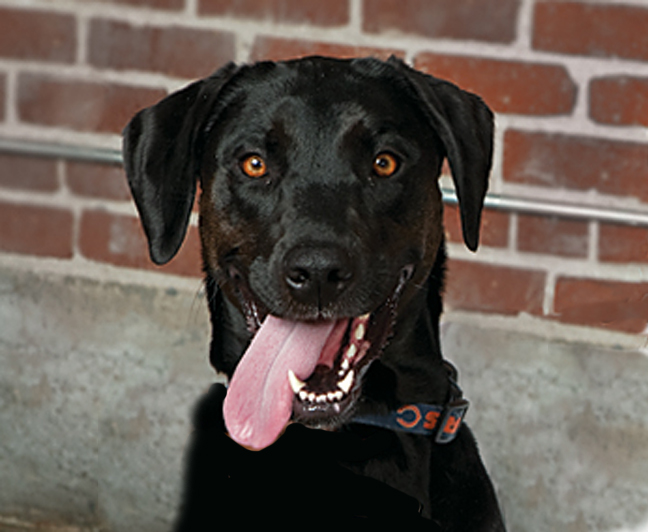 KITTY O’NEAL, afternoon drive news anchor for KFBK NewsTalk 1530 AM, and KURT SPATARO, executive chef/co-owner of Paragary Restaurant Group, pictured with 8-year-old Ocicat Rudy, 2-year-old Somali Leo and 15-year-old Abyssinian Sammy. (Daisy, their 9-year-old tabby, is camera shy.)
On their cats: “Sometimes, on cold nights, they’ll all be snuggled up together on the bed—even Daisy. It’s the cutest thing. They’re all like little dogs. They love my company and I love theirs,” says O’Neal. “Kurt loves them. He’s good with them. I let the cats sleep in the bed, and he’s a good husband that way.” MARK S. ALLEN, entertainment anchor for “Good Day Sacramento” on CW31 and host of the Emmy-nominated “Mark at the Movies” on CW31 and ReelzChannel Network, pictured with 2-year-old Jewel, a Chihuahua (dad)/pit bull (mom) mix and 1-year-old Bobby.
On his dog: “Never before has a dog had more justification to bite a human than this dog. She is a saint. Spoiled, perhaps, but to put up with the spirited nature of my kids and to share a house with a rat the size of her father—she deserves some pampering!”
On his rat: “He’s one of the only rats on the South Beach Diet that I am aware of.” MEGAN VINCENT, community relations manager for Pacific Coast Building Products, pictured with Dom Lucchetti, her 4-year-old Hanoverian, and 2008 and 2009 Division Champion of the California Dressage Society.
On her horse: “He just does what he’s asked to do. He’s kind of a people pleaser.” DAMANY LEWIS, general assignment reporter for KCRA 3, pictured with 3-year-old Molly (aka “Molly the Super Dog”), a Lab mix.
On his dog: “When we moved out to California, we didn’t have much family here so we just wanted some companionship. One day, I said I was going to get a dog. My wife said, ‘Don’t come back with some gigantic dog,’ and what did I do? I came back with a 65-pound dog,” says Lewis. His wife, Rochunda, was soon smitten. JENNIFER WOOD, music director, assistant program director and on-air personality for KYMX MIX 96, pictured with parakeets Baby Byrd and Olive, both 1 , their father, Jhanu, 12, and 18-year-old German-born Shadowfax.
On her birds: “The father is in love with . . . Olive. They will peck around each other. Baby Byrd will get jealous and try to get into the middle of the other two by turning upside down on her swing,” says Wood, who adds that when the birds are let out of their cage, “They fly in formation like the Blue Angels.”
On her cat: “He’ll sit in the tub and yowl until I come in and turn the water on so he can . . . lick the water. He loves water.” GUY FARRIS, host of “Sacramento & Co” on News10, pictured with 3-year-old Penelope and 4-year-old Zorro.
On his girl cat: “Penelope came on the show, and when I tried to lift her up and give her back to the people at Happy Tails, she wouldn’t let go of me.”
On his boy cat: “When he is in trouble, I call him Don Diego de la Vega, which is Zorro’s real name.”
On the pair: “They sleep together, they play together, they love to wrestle, they love to wake me up at 6 a.m.—whether I am working or not. I call it ‘Kitty Cirque du Soleil’ because they start performing for me.” JENNIFER O’BRIEN, vice president of Sacramento Magazines Corporation, pictured with 11-year-old “Canine Companion reject” Lupine, a yellow Lab/golden retriever mix.
On her dog: “Lupine is such a sweetheart, and my constant companion. She’s my third child and follows me everywhere I go. She adores me, and she doesn’t talk back,” says O’Brien. “Despite weighing more than 10 times that of our small tabby cat, Lupine is quite wary of 13-year-old Sarge. She gives him a wide berth and refuses to even look him in his one good eye.”

Check our “Best of the Vets” feature in the June issue too!