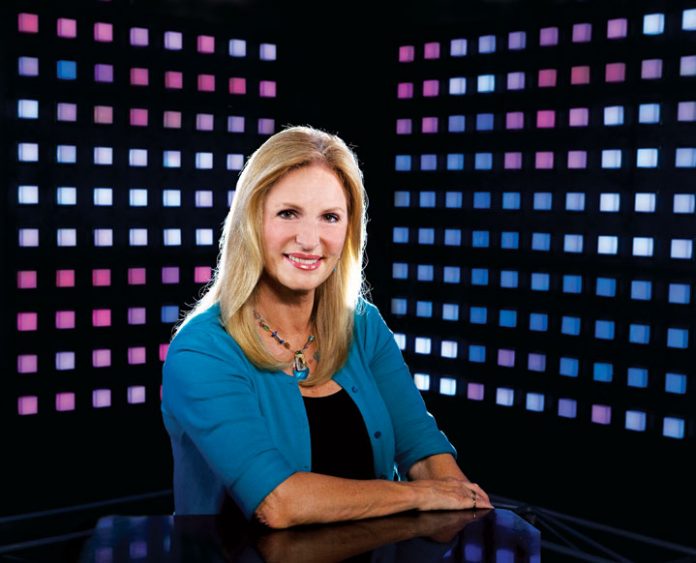 The longtime local media personality turned her back on TV news but opened herself up to whole new worlds in founding the Conscious Media Network.

For years, Regina Meredith enjoyed a successful broadcasting career, both locally and nationally. But she found herself increasingly disillusioned with mainstream media.

“I found that it was a skewed view of life and that it was representing only the most negative events that occur on the planet,” Meredith says. “It was actually starting to have an impact on my health and well-being.”

Known then as Regina Campbell, she started out as sportscaster with KCRA Channel 3 in the 1970s. From 1977 to 1978, she co-anchored a national sports show with Bryant Gumbel on NBC, then returned to Sacramento to anchor the news at KTXL Channel 40.

The broadcast gigs that followed illustrated Meredith’s shifting interests and priorities: She worked for Channel 10 in 1990, where she helped viewers adopt more earth-friendly practices via her “Envireports,” then switched to PBS a few years later, working behind the scenes and on the air and producing the award-winning documentary “Sierra in Peril,” which aired nationally. Her PBS series, “Regina’s Vegetarian Table,” reached an international audience and she wrote two vegetarian cookbooks. Meanwhile, in her off-work hours, she explored such New Age pursuits as meditation, alternative medicine and vibrational therapies, including color and sound therapies.

But something was still nagging at Meredith, so in December 2004, she—along with her soon-to-be husband, Scott, a former television producer—established the Conscious Media Network. The website, which is updated daily, features 30- to 45-minute interviews with some of the biggest names in metaphysics and alternative medicine: near-death-experience author Dannion Brinkley, philosopher and behavioral expert Dr. John Demartini, world-champion-athlete-turned-motivational-author-and-speaker Dan Millman, research scientist Bruce Lipton, Ph.D., and medical intuitive Carol Ritberger, Ph.D. Subscribers who pay $5 a month gain access to the latest interviews along with The Fifth Element, videos of Meredith giving her take on the site’s hot topics, which range from the law of attraction and holistic health to the environment and the issue of mind control. The website also includes related videos, music and articles.

We caught up with Meredith recently to learn a little more about CMN.

What made you decide to start the Conscious Media Network? I think there comes a point in everyone’s life where you distill who you are and what you’re here for. It was very clear to me that I had two major tasks in life, and one was to raise my son, Stuart, as well as I was capable and the second was to do what we’re doing now.

Why the Internet? I wanted absolute, 100 percent editorial control—no interference from sponsors or anything else.

Tell us what kind of topics we’ll find on the site: Holistic medicine, raw foods, conscious business—how to do business in way that is sustainable and where it’s a win-win-win for everyone.

Some of it can be challenging, in that we are talking about controversial government programs; we’re dealing with whistle-blowers who have been on the inside, who are telling people to wake up quickly and understand what’s going on.

Everything we put out, even if it’s something that’s more of a whistle-blower nature or more controversial, we put it out for a reason. It’s never to sensationalize the subject. It’s to help people understand there may be more to the story than you’re being told at the present. And then we will give an opportunity for solutions at the end.

Why isn’t mainstream media covering some of this? The type of information that people need to know now is not easy for any of the large corporations to profit from. When you start gathering seeds and growing your own food, when you turn away from a heavy load of pharmaceutical drugs, when you turn away from what you’re being fed from the government or the media during football halftime or on your news breaks . . . you’ll start to see a trend, which is: “You have no power. You are not good enough. You need to buy this to be more beautiful. You need to buy that to sleep better.” And so forth. We’re telling people that’s nonsense: You already have everything you need if you take responsibility and just develop yourself. There’s no profit in that for anyone, so you can be sure that mainstream media will not be covering it.

How do you choose content? I tend to choose everything according to what I’m intuitively feeling is needed in the moment by our viewers. And also it’s a blend and a balance of other things we have on our site.

Do you agree with all of the opinions aired on CMN? No, I don’t. I do feel that each one has something valuable to offer. But these are very complex stories and some of them are kinda far-out. Do I agree with every tenet of what they are putting forth? No—I may argue some points with them. But I think that they have enough value in what they’re doing to allow them to have their full say on CMN. Then let the viewers judge for themselves whether or not this has merit.

What role does your husband, Scott, play in this? He is a jack-of-all-trades, but he has the ability to learn everything extremely quickly. So he taught himself HTML, for example. He handles all of the technical development and maintenance of the site. He’s the videographer for all of the interviews as well. Ultimately, he’s best-skilled at putting together larger partnerships, and that’s what he’ll be doing in the future.

What do you get out of this personally? While this was a very risky adventure for us financially, the rewards come via our viewers—e-mails every day pouring in from around the world on how profoundly peoples’ lives have been affected.