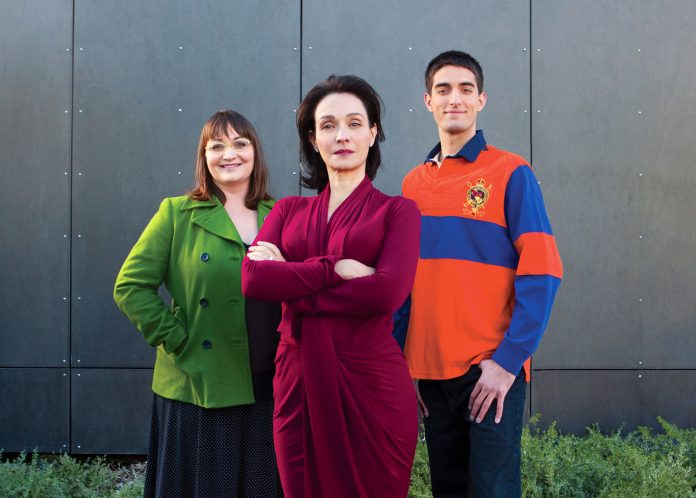 G. HARDY ACREE—As head of the Sacramento County Airport System, G. Hardy Acree is the man behind The Big Build, the $1.04 billion terminal under construction at Sacramento International Airport. The largest capital improvement project in county history, the new Terminal B will triple the size of the dated facility it replaces, boast an assortment of public art reflective of the landscape and—as foodies salivated over the headlines this past fall—feature restaurant concessions run by some of the region’s best-loved restaurateurs, including Randy Paragary. FEROSS ABOUKHADIJEH—When Internet behemoth Google rolled out its “instant search” tool in early September, Feross Aboukhadijeh, 20, of El Dorado Hills set himself a goal: to create the same sort of function for YouTube and complete it within the hour. Well, it took the Stanford University junior three times longer than that to create YT Instant. But within days, he became a sensation of his own. Aboukhadijeh (Oak Ridge High’s 2008 valedictorian) made global headlines and received a job offer from YouTube co-founder Chad Hurley. Within 10 days, ytinstant.com received its 1 millionth visitor.

JERRY BROWN—Governor Moonbeam is back. This month, Jerry Brown returns to Sacramento for his third term as governor of the Golden State. The first time around, he was its youngest chief exec. Now, at 72, he’s its oldest. But he’s no less plainspoken. “I didn’t create this mess,” Brown told reporters the morning after his victory, referring to the state of the state’s economy. “But I’m going to do everything I can to make it better.” It remains to be seen whether he’ll invest in a bed frame this time around or simply keep a mattress on the floor of a Sacramento pad as he did in the late ’70s and early ’80s.

OMRI CASSPI—The first Israeli ever to play in the NBA, Omri Casspi had a stellar rookie season with the Sacramento Kings: The 6-foot-9-inch forward played in 77 of 82 games, scoring an average of 10 points each time. “(He) proved beyond a doubt that he has a place among the world’s best,” crowed The Jerusalem Post. Casspi responded with grace when vandals painted swastikas on a downtown mural of him. In fact, when the news broke, he was back in Israel, spending part of his time off volunteering at a basketball “peace” camp for Palestinian and Israeli youths. GRETA GERWIG—Actress Greta Gerwig had quite a year: The St. Francis High School alum was on the cover of W magazine, made headlines at New York City’s Fashion Week and spent her 27th birthday drinking martinis with Dame Helen Mirren on the set of Arthur, in which Gerwig reprises Liza Minnelli’s role from the 1981 film. Raised in River Park, she graduated from Barnard College and appeared in a dozen indie films before garnering solid reviews in the Ben Stiller movie Greenberg, released this past March. Her next film, out this month: No Strings, starring Natalie Portman and Ashton Kutcher. RICK AND ERIN HOUSTON—Who knew that going viral could be done with such gentility? Leave it to Rick and Erin Houston, whose wildly popular Tweed Ride has tapped into urban Sacramentans’ unbridled dual passions: cycling and gastronomy. The periodic spins wend from one midtown eatery to the next, and—in its first year—attracted hundreds of bicyclists costumed in vintage garb. “They’ve done an amazing job of creating a city bike culture,” says Andrea Lepore, co-owner of midtown’s Hot Italian restaurant. “They’ve also shown it’s OK to ride your bike in something other than Spandex or clip-on shoes.”

KEVIN JOHNSON—It was a tough year for Kevin Johnson. Voters rejected his “strong mayor” ballot measure. His hopes for a new basketball arena were dashed. Oh, and he called off his high-profile wedding ceremony. Even the trio of school board candidates he backed in the name of education reform flamed out. Yet the first-term mayor and former NBA star remains unfailingly upbeat as he brokers new partnerships on development, homelessness and other issues—and tries to improve relations with his fellow City Council members. Johnson also is establishing credentials in school reform: He recently was appointed co-chair of two national education panels, including one for the U.S. Conference of Mayors. LIAL JONES—Lial Jones threw open the doors of the snazzily expanded Crocker Art Museum in October, ushering in a new era for the 125-year-old venue and redefining the Crocker’s standing in the ranks of regional cultural locales. The $100 million zinc- and aluminum-paneled Teel Family Pavilion boasts four times the gallery space of the old quarters, paves the way for larger and higher profile exhibits, and caps more than a decade of planning and fundraising by museum director Jones. “This is just the beginning,” Jones said during the opening-weekend festivities. “The building is just a means to an end.”

ROB KERTH—In 2010, Midtown Business Association executive director Rob Kerth focused on eliminating what he calls “the inconveniences of urban life” for the neighborhood’s merchants, artists and chefs. That meant new graffiti and litter response teams. He cites midtown’s recent 10 percent dip in sales as proof that the area is soldiering through the recession better than elsewhere. And he remains protective of his turf. When Second Saturday became a concern after a fatal shooting in September, he unapologetically shifted the blame from the monthly art walk to the late-night crowd. RAY KERRIDGE—When city manager Ray Kerridge quit his post in the midst of record budget woes and a $2 million building department scandal, Gus Vina stepped into the breach. An assistant city manager who oversaw Sacramento’s $800 million-plus budget, Vina was appointed city manager to get Sacramento through its immediate crisis, and is in the job at least through March. “I think he’s the right guy in the right place at the right moment,” says Chuck Dalldorf, aide to former Sacramento Mayor Heather Fargo. Vina is not only digging out but is planning ahead: In October, he and his top managers began work on a sweeping recovery plan. MATINA KOLOKOTRONIS—Attorney Matina Kolokotronis spent more than a dozen years as the chief independent counsel to the Maloofs. She stepped squarely into the spotlight last spring when she was named president of the Sacramento Kings’ business operations. Now the highest-ranking female in the NBA, she oversees sales, marketing, public relations, merchandising and arena operations. Joe Maloof is a fan: “She’s so well-liked,” he says of the mother of three and wife of developer Sotiris Kolokotronis. With the Kings’ flagging team record and spotty game attendance, not to mention the recently stymied plans to replace Arco Arena, Kolokotronis has her work cut out for her. BOBBIN MULVANEY—In 2010, Bobbin Mulvaney stepped out of husband Patrick’s rather large shadow and came into her own. First, she clinched a deal to manage some of the restaurants slated to open in Sacramento International Airport’s new terminal. Then she beat out 17 other firms (including biggies from San Francisco and L.A.) to win the concession to run the Crocker Art Museum’s new cafe and serve as house caterer. With the same emphasis on local and sustainable ingredients as Mulvaney’s Building & Loan, the cafe has received rave reviews for its housemade pastas and baked goods. “It’s like having a new baby,” says Mulvaney.

TINA REYNOLDS—With the fate of California’s gay marriage ban in legal limbo, activist Tina Reynolds and her group, Equality Action NOW, kept busy in 2010, leading protests at the Capitol, hosting celebrations for California’s first Harvey Milk Day and organizing a candlelight vigil to decry the national spate of youth bullying. Equality Action NOW also began collecting video testimonies of local gays and lesbians as part of a larger project, titled “It Gets Better Sacramento.” In June, Reynolds was honored on the floor of the California State Assembly for her ongoing efforts against Proposition 8 and was hailed as “a tireless activist for social equality and change.”  While many disagree with her position, no one can deny her passion.

SUSAN SAVAGE—When Sacramento River Cats owner Art Savage died unexpectedly in late 2009, his wife, Susan Savage, took the helm of the family business. She kept one goal in mind, colleagues say: to carry on her husband’s vision for Raley Field as a community gathering spot and the region’s best entertainment value. To that end, the River Cats initiated a number of enhancements under Savage’s leadership, from “eat free” nights at the ballpark for senior citizens and children to a “Diamond Club” seating section. Even Dinger, the River Cats’ huggable mascot, came on board full time in 2010.

MICHELE STEEB—Plates Cafe and Catering was one of the hottest meal tickets in Sacramento in 2010, and credit for the first-of-its-kind operation goes to Michele Steeb, executive director of Sacramento’s St. John’s Shelter Program for Women & Children. The cafe opened in June, dishing up good food and providing on-the-job training for once-homeless women. Located at Depot Park, it helps St. John’s clientele overcome obstacles to employment: a lack of job skills, affordable child care and transportation. GUS VINA—When city manager Ray Kerridge quit his post in the midst of record budget woes and a $2 million building department scandal, Gus Vina stepped into the breach. An assistant city manager who oversaw Sacramento’s $800 million-plus budget, Vina was appointed city manager to get Sacramento through its immediate crisis, and is in the job at least through March. “I think he’s the right guy in the right place at the right moment,” says Chuck Dalldorf, aide to former Sacramento Mayor Heather Fargo. Vina is not only digging out but is planning ahead: In October, he and his top managers began work on a sweeping recovery plan.

YVONNE WALKER—The state’s rank and file has borne the brunt of the bad economy: forced to take time off without pay, threatened with minimum wage, and often left at the mercy of judicial and legislative forces. But for the 95,000 members of Service Employees International Union Local 1000, at least, Yvonne Walker had their back. Walker, a former Department of Justice legal secretary, has presided over the largest state worker union since 2008. As workers celebrated their long-awaited contract settlement in October, Walker pushed  SEIU members to suggest cost-cutting measures in their own workplaces.

MICHAEL ZICCARDI—UC Davis veterinarian Michael Ziccardi is a hero to the sea turtles, dolphins and manatees of the Gulf of Mexico. He was brought in this past spring to lead the federal government’s marine animal rescue efforts in the wake of the 185 million-gallon Deepwater Horizon oil spill. An associate professor and director of the California Oiled Wildlife Care Network, Ziccardi has worked on more than 45 national and international spills. In Louisiana, as a consultant with the National Oceanic and Atmospheric Administration, he trained workers and prepared evidence for eventual federal litigation against BP.