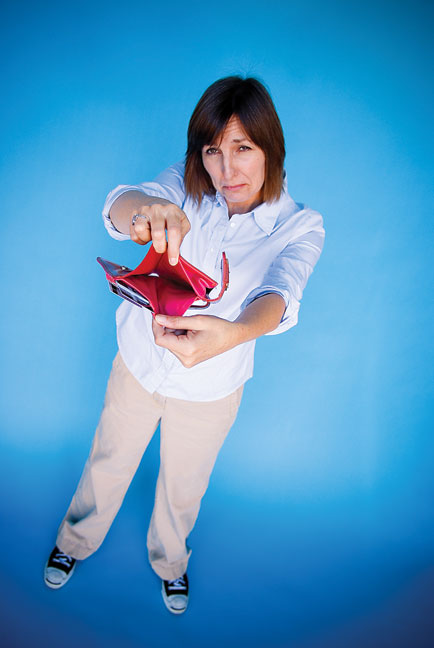 For two weeks, the author and her family gave up spending to see if they could change their money habits. What did they learn?  Well, for starters, that two weeks is a long time.

Seven days after the end of my two-week fiscal fast—a spending colonic meant to flush away the bloat of consumerism—I sat down at my computer and ordered up a size 6 helping of hypocrisy.

Yes, I clicked my way to a black cotton poplin shift dress and sour-lemon “critter collar” polo shirt from jcrew.com. They arrived on my porch five days later.

I slipped on that shift of shame the very next morning and went to work.

I didn’t need the clothes. In these perilous economic times, it would have been far more sensible to save my cash for, oh, I don’t know, maybe my daughters’ nearly nonexistent college fund. But, alas, I did not.

Despite preaching the gospel of thrift to my family during our 14-day money detox, as soon as it was over I supped at the trough of excess like a prodigal on crack.

Am I incapable of learning?

Let’s backtrack. In the past year, the foreclosure crisis dropped a neutron bomb on suburbia. Buildings still stand. But where are the people? Then the price of fuel and food began rising. Now numbers on gas pumps roll by faster than credits at the end of a sitcom. Belts? Tightened. Pennies? Pinched.

The result is that spending as a recreational activity has lost its cachet. Not spending is in, apparently. Oprah talks about it: Her Debt Diet website gives endless tips on how to stop buying all the products advertised on her show and in her magazine. Real Simple magazine has built its empire on the fun of frugality. And books denouncing the frequent flashing of debit cards fly off shelves. Which explains the popularity of Jeff Yeager’s book, The Ultimate Cheapskate’s Road Map to True Riches.

Yeager is the messiah of the fiscal fast. He believes everyone could benefit from not spending money for a set period of time. No shopping for anything. Yeager told Matt Lauer on NBC’s “Today” show, “We spend and consume too much, and I think it doesn’t make us any happier.” I watched the interview, which led to a question and a thought: What garage sale yielded the ghastly plaid shirt he wore?  And, maybe, he’s right.

In fact, I had the sore arms to prove he was right. Just before the fast, we completed moving across town into a larger house better suited to our family of four (me, my husband, Rocky, and our two daughters: Rose, 14, and Lily, 11). Loading, carrying and unpacking cardboard boxes stuffed with what can only be described as crap was exhausting and eye-opening. Why do I own six unopened packages of Bic Soleil disposable razors (all in neon green)? Oh, that’s right. Every time I pass the razor aisle, I think, “I’d better get some, in case we run out.” Now I have enough razors to shave Big Foot from head to toe daily. Same with shampoo. Bored with one brand, I buy another before the first is used up. The half-empty—half-full?—bottles line the bottom of the bathroom closet. See the pattern? T-shirts with tags attached, photo frames never filled, unviewed videos. Box ’em, move ’em, hide ’em.

We needed help to curb our obviously rampant materialism. Armed with this information, and because I love a new trend, I convinced my family to fiscally fast. This was not easy. Rocky grew up in a family that couldn’t afford life’s finer things and is making up for it now. There are few Banana Republic sales, best-selling hardbacks or California Cabernets that he can resist.

He found a soul mate in me. My parents fought often over money. I decided early on to avoid this trap, not by becoming fabulously wealthy but by never thinking about my finances. I always assume I have money, somewhere. I am an impulsive shopper despite never knowing how much is in the checking account.

I also have very little interest in performing those do-it-yourself tasks that tend to save money. Take cooking. Please. I know making lasagna is cheaper than buying four individual slices from Taylor’s Market’s takeout case, but the thought gives me a headache. To cook, one must find a recipe, write down ingredients, buy them, pre-pare them, put them together accurately and then wash dishes afterward. This is clearly a waste of time. Of course, the worst part about cooking is staring at the leftovers for a week before you throw them away.

Because I seldom cook, we couldn’t follow Yeager’s fasting directions per se. We have no food reserves in our cupboards and freezer to fall back on, and therefore had to shop for groceries. We would not survive on ice cubes, soy sauce and a can of breadcrumbs purchased sometime in the 1990s. So we made the following modification: We would allow ourselves to purchase ingredients to make food but nothing else.

We started fasting on a Monday at 8 a.m., a time deliberately chosen so we’d all be at work or school during the initial withdrawal period. I kept a running diary for reflection purposes. Here is a sample of my entries:

Tuesday, 6:38 p.m. Shopping at Taylor’s for dinner. Quickly pass by produce area and butcher counter. Decide to cook a homemade meal of quesadillas. Wait. Is a tortilla an ingredient? Is a cookie? Buy cookies, tortillas and cheese. Feeling very proud.

Wednesday, 7:52 a.m. Make pot of coffee (good). Cannot find Starbucks travel mug (bad). Rocky leaves for work without coffee. I remind him he cannot go to a restaurant for lunch. “I’m tired of the fiscal fast! I’m buying what I need.”

Wednesday, 6:54 p.m. Rocky grills steak for dinner, opens a Zinfandel from the basement. Explains that he came home for lunch, made a tuna sandwich and watched Tootsie on cable. “I’m going to stick to this crazy thing as long as I can, just for you.”

Friday, 12:40 p.m. Confusing lunchtime conversation with co-worker about Yeager’s fasting plan. He insists that his girlfriend also is doing the detox, and that it includes a ban on TV watching and using the computer. I panic. (Note to self: Rely on sources other than Matt Lauer in the future.)

Friday, 3:43 p.m. I bump Rose from the computer mid-MySpace and turn off TV. Daughters seethe.

Saturday, 1:29 p.m. I knock on Rose’s door. “What are you doing?” The answer sounds angry. “I have nothing to do if I can’t spend money, Mom.” I peek in. She’s reading the Pulitzer Prize-winning novel Angela’s Ashes, which she found in our living room bookcase earlier.

Saturday, 1:35 p.m. I find detailed article by Yeager on web. No mention of TV or Internet ban. Oops.

Saturday, 5:30 p.m. Making pizza in the kitchen with Rose and Lily. We laugh at our misshapen masterpieces, our hair and hands dusted with white, our shirts splattered with red. It’s fun.

Tuesday, 7:44 p.m. A week has passed without Target or the mall or iTunes. At school, Lily receives an invitation to friend Madison’s Friday night birthday party. I tell her she must make a present. “Madison is not on the fiscal fast,” snaps Rocky. “The true meaning of a gift is to please the person the gift is going to. We’re not giving Madison some sorry-ass papier-mâché monkey.”

Thursday, 9:15 p.m. Rocky: “I’ve eaten more tuna than a great white shark. We may have saved a few bucks, but I will die of mercury poisoning.”

The fiscal fast ended the following Monday. In two weeks, I broke the rules three times: I bought the coffee mug, a present for Madison and a piece of foam-core board for a school project. Despite a desperate attempt to link spending and patriotism (if you love America, you’ll help its economy), Rocky adhered to the rules completely, as did my daughters. But what was the point? I had returned to my old spending habits.

I watched the clip from “Today” again.

“Until you’ve decided what’s enough for you, how will you ever be happy?” said Yeager. “How will you know when you’ve arrived?”

That was it, I realized. We didn’t need the fiscal fast because there’s not a one of us who is unhappy over a) our finances or b) our possessions. Sure, we could save more. Yes, that college fund is skinnier than Mary-Kate Olsen. And it’s undeniable that neither Rocky nor I will be retiring at 55. But we’re not such wastrels that we’re in financial danger. What’s “enough” for us is spending time together, and that doesn’t come cheap.

What is a fiscal fast?

In The Ultimate Cheapskate’s Road Map to True Riches (Broadway Books), Jeff Yeager argues that we all could benefit from a fiscal fast. In these tough economic times, he writes, it’s smart to embrace your “inner miser.”

What exactly is a fiscal fast? It’s the swearing off from the use of money for a specific time—at least a week. During the fast, you (and everyone in your immediate family) agree not to spend any money, regardless of type of expense (food, clothing, entertainment, routine bills, commuting costs) or form of payment (cash, check, credit or debit card). Hoarding (such as buying food in advance) is prohibited. Yeager recommends keeping a household diary, with every family member making a short daily entry about the challenges of getting through the day without spending and an estimate of how much money they normally would have spent.

At the end of the fast, says Yeager, you should have a new appreciation for the notion that spending money is a choice, not a necessity.