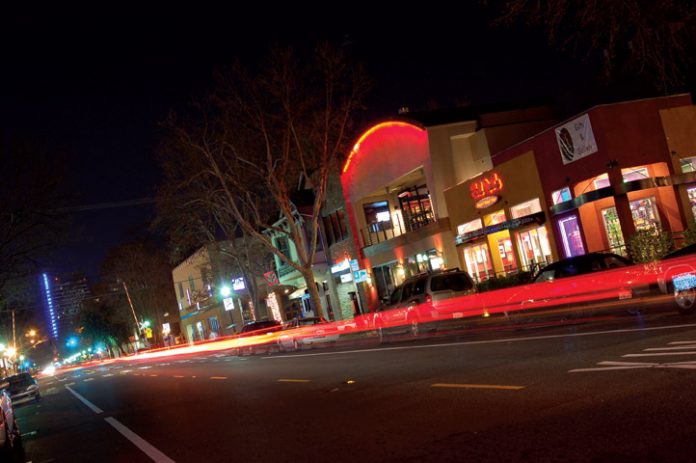 While downtown Sac was getting all the press, midtown was quietly doing its thing development-wise. Now, it’s ground zero for all that’s hip. Lofts. Restaurants. Boutiques. Wine bars. Midtown’s got it all. How’d this little urban neighborhood suddenly become so hot?

Retiree Ray Cruit knows a little something about midtown Sacramento. His mom grew up at 20th and O, and as a young boy he spent a lot of time in the neighborhood in the ’50s and ’60s. The produce deliveryman’s Model T was a fixture on his grandparents’ street, and walking to Mario’s Italian Cellar on L Street for dinner was a big night out for Cruit and his family.

As a teenager, he joined his buddies at Memorial Auditorium time and again to see the likes of The Beach Boys and the Rolling Stones at $4 to $5 a seat. Once the curtain came down, most concertgoers went home. “There was a hofbrau nearby, but that was about it,” Cruit reminisced recently.

These days, the retired hospital worker lives in Tahoe Park. Still, he frequents midtown several times a week, hunkering down at Old Soul Co. off 17th Street with a cup of fresh roast and a word puzzle or dining out in the evening with his wife, Rachel.
“Now we just walk down the street and pick a place. There is so much variety,” Cruit says. “It’s really coming back.”

And with a vengeance. The massive swath of midtown (a mile from 16th Street to Alhambra Boulevard and nearly twice that from B Street south to V) is in full bloom, with restaurant, retail and residential construction at its most robust in the area since Sacramento’s early days.

From the likes of Hangar 17 (billed as “Sacramento’s only upscale dive bar”) on S Street to the more haimish Butch-n-Nellie’s Coffee Co. at 18th and I, and from the spanking-new L Street Lofts to the übercool MARRS (Midtown Art Retail Restaurant Scene) center, the boom mixes bohemian with cutting edge, a bit of convention and a lot of capital.

The payoff is that midtown Sacramento is becoming the 24/7 spot that civic and business boosters had long envisioned. Sure, there is a discernible population surge on the Second Saturday Art Walk each month, and the revelry spills out onto the streets. But there’s plenty going on the rest of the month, into all hours of the night and at all corners of the area effectively nicknamed “the Grid.”

“This is a phenomenal success story, and I think that many cities are envious of where midtown is going,” says Jim Rinehart of the city’s Economic Development Department, calling the area’s rise “more evolution than revolution.”

Indeed, Sacramento has issued nearly 7,700 building permits for commercial and residential construction in midtown since 2002 (granted, 500 of those were for signs), compared with 4,400 permits between 1992 and 1997.

Statistics aside, the leafy neighborhoods that make up midtown must be walked for full effect: the Handle District (58 Degrees & Holding Co., Dragonfly Restaurant and a string of other new or newish eateries at 18th Street and Capitol Avenue); the comely R Street Market at 19th Street with its mix of shops and lofts; Winn Park; Metro Square at 26th and H. Even Lavender Heights, midtown’s established gay and lesbian hub at 20th and K streets, has undergone a recent building boomlet.

“So what we have now is a jewel,” declares Connie Miottel, executive director of the Midtown Business Association.

Midtown thrived for years as Sacramento’s best-kept secret and (thankfully) withstood the bulldoze-and-big-box boom that drained so much character out of other urban centers in the 1970s and 1980s, she says. As a result, “Our community is full of one-of-a-kind, unique buildings—and we have a long-term residential base that has been extremely supportive, that hasn’t moved out to the suburbs.”

Then there are the midtown “pioneers” of the 1970s and 1980s, who helped lay a solid business foundation, according to Miottel: Sacramento restaurateurs Randy Paragary and Biba Caggiano, as well as Terry Sidie of Faces Nightclub and, more recently, Head Hunters restaurant and bar just across the street.

“Mixed use” is the latest urban wave to hit midtown, and developers Michael Heller Jr. and Mark Friedman have been at its crest. The two are part of the LoftWorks team, which is transforming old midtown properties into viable restaurant, retail and loft projects.

The Elliott Building at 16th and J streets, once an auto dealership, opened in 2004 with P.F. Chang’s China Bistro and locally owned Mikuni Japanese Restaurant at street level, office space and 16 lofts on the upper two floors. Rinehart calls that project a “bellwether” for the area. And in 2005, the LoftWorks team completed a similar project at the other end of the block.

MARRS is Heller’s latest midtown project. The structure at 20th and K streets was built as a storage facility for Mayflower movers in the 1940s, later became state offices and was going to be nothing more than a real estate investment for Heller.

“Then I started seeing it more as a 55,000-square-foot canvas to paint,” he says. The result—completed in 2007—is a commercial chef-d’oeuvre, enhanced by a wooden deck and sleek metal railings along the eastern entrance and eye-catching blue glass pebbles in the planters along the sidewalks.

Heller, Sacramento-born but world-traveled, is clearly smitten with midtown. “It’s the closest thing to bohemian, free-spirited, multicultural and multiethnic blending you’re going to find; it’s the best taste of that in Sacramento,” he says. “And it’s the best chance to build, to push the envelope on cutting-edge architecture.”

The tenant mix at MARRS is an eclectic one. Peet’s Coffee & Tea occupies a prominent corner. Most of the other businesses are locally owned, including an offshoot of Luigi’s Pizza Parlor (from Stockton Boulevard), DV8 Boutique and the Solomon Dubnick Gallery, which relocated to midtown from the Howe Avenue area this past summer.

Jordan moved into midtown from Land Park in 2002 and was transitioning from the printing business when he met Jason Griest. The two became business partners and opened Old Soul in a cavernous brick building in the rear alley off 17th and L streets, behind the new Bows and Arrows boutique.

Like so many midtown projects, Old Soul took some doing to be market-ready. The 2,300-square-foot building had no operable plumbing, poor electricity and seven layers of paint on the walls when Jordan and Griest found it. The two opened the wholesale business in August 2006, but walk-in customers began trickling in from the start—even without signage or advertising. “It was like a speakeasy,” Jordan says.

Now the coffeehouse occupies one side of Old Soul while a team of bakers, a coffee roaster and 150-pound burlap bags of coffee beans occupy the other. The retail side operates on an honor system; customers pay into a pewter jar in lieu of a conventional cash register.

Jordan lives nearby, in one of the 64 Capitol Park Homes built by Sotiris K. Kolokotronis at 15th and P streets nearly five years ago. The local builder is finishing up another midtown project through his firm, SKK Development Corp. The L Street Lofts comprise 92 condominiums at 18th and L, directly across from another SKK project: a 176-unit apartment complex.

“A lot of things came together in midtown in a very organic way,” says Kolokotronis. “It’s a challenge. At the same time, it’s an opportunity to see how this eclectic mix can work together.”

The L Street Lofts have sold briskly, attracting a diverse market, according to the builder: young professionals, empty nesters and other assorted urbanophiles. Kathleen Moore counts herself among them.

Moore, who works for the California Department of Education, sold her home in South Land Park in May and moved into one of the SKK apartments until her new L Street loft was ready. She traded in a 1,900-square-foot home for a 700-square-foot condo—and couldn’t be happier.

“It was a matter of what I wanted in my life, and I no longer needed a three-bedroom house with a pool further out,” says Moore. “I preferred to have a smaller space, but closer to the things that I like to do.”

Moore loves the modern aesthetics and “thoughtful design” of the L Street Lofts. Her office is less than six blocks away. A good 50 restaurants and coffeehouses are within walking distance, as is the theater. “A week can go by and I don’t have to drive my car,” she says.

The midtown boom has not been without growing pains, and a shortage of parking is at the top of many folks’ lists. That holds true for Kristi Bielski and Kim Quintana, who opened Butch-n-Nellie’s nearly three years ago on I Street. “Parking is keeping lots of people from coming in,” Quintana says.

Many are following the trends closely to make sure that the essence of midtown remains the same, even as the area continues to grow and prosper. Few are more vigilant than Brian Fischer, a community organizer and one of the forces behind midtowngrid.com, a business networking and social advocacy group.

“What kind of flavor would there be to the city of Sacramento if the majority of the 100 restaurants and 40 or 50 boutiques in midtown were primarily franchises and chains? What would people remember? Where would the [profits] go?” he asks.
Jennifer Porter, a medical sales rep, has lived in midtown for 11 years and owns a 1913 bungalow. She and her friends cruise Second Saturday by bike and stay on top of the latest restaurants and boutiques.

“There are a lot that have opened in the last year,” says Porter, who is partial to 58 Degrees, Mulvaney’s Building & Loan and Chicago Fire pizzeria, which opened recently on J Street. “I am wondering how many of them will stay open.”

Restaurateur Erick Johnson is banking on at least one more: G.V. Hurley’s, slated to open sometime this year in the 2800 block of J Street. Johnson and his partners hope their “American bistro” will fill a culinary void in the immediate area, which is weighted toward ethnic cuisine.

“We think that it’s workable and good just because of what else is going around out there,” says Johnson, whose background is in country club management. “It’s already a ‘go to’ area.”