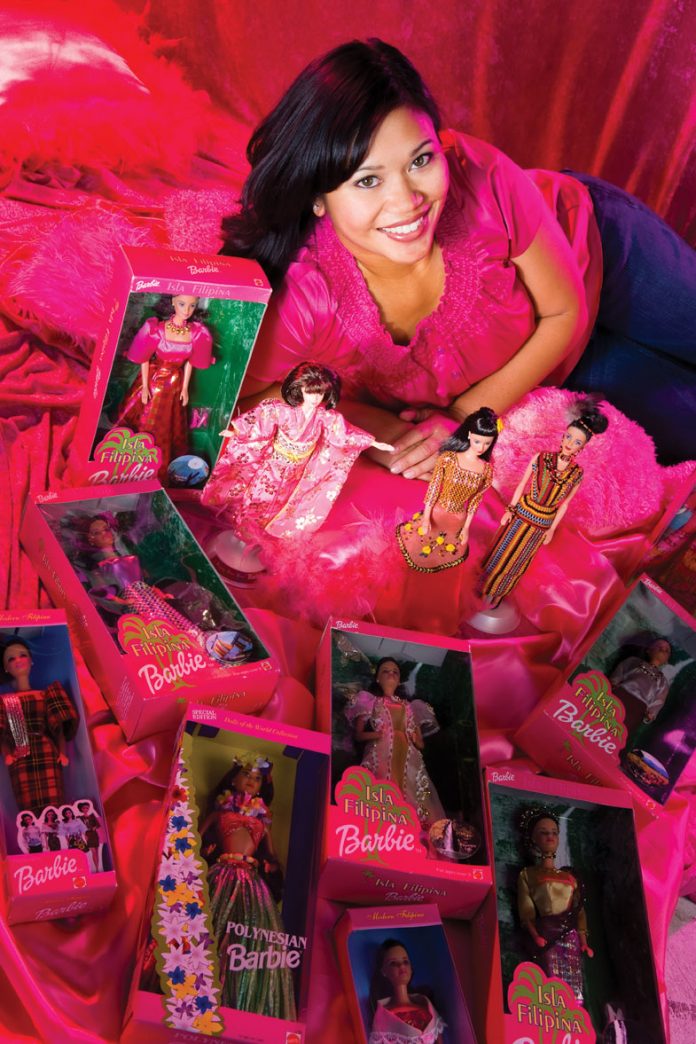 For some, collecting is not just a pastime but a passion. We introduce you to some local folks who’ve indulged their passions, amassing unusual collections that are recognized throughout the region, if not the world, as tops in their field. From Beatles records to Asian Barbies, their collections confirm just about anything can become a collectible.

Everybody knows Barbie. The iconic doll has been a staple on toy-store shelves for more than half a century and continues to be one of the top-selling toys throughout the world. Despite the incursion of Bratz and American Girl dolls and a whole host of pretenders, Barbie holds her own. And why shouldn’t she? Barbie has got it all, says Antoinette Olimpiada. The hot boyfriend, a little sister, a cute summer cottage and a pink Corvette.

Nevertheless, Nette (as she likes to be called) didn’t really start collecting Barbies until she first laid eyes on Philippine Island Barbie. My jaw dropped because never in my life had I seen a doll that looked like me before, says Olimpiada. She had brown eyes, tan skin and black hair. From that moment, I knew I wanted to collect only Asian Barbies.

Her collection has grown slowly but steadily over the years. Most of the dolls were made for overseas markets. Olimpiada keeps them boxed under the bed or displayed on a high shelf in a bedroom of her Antelope home. Collecting does have a downside: If you want to keep the dolls in pristine condition, they can’t be played with. As sad as it is, Olimpiada says, they aren’t proudly displayed anywhere for fear that any female visitor under the age of 10 will see them and open the boxes.

Nevertheless, Olimpiada’s 50-plus-item collection of Asian Barbies (and Kens) suggests that throughout world, there are young girls dreaming of pink Corvettes.

You just had to be there, says Ken Stovich. It was around 1977, ’78. It was like a phenomenon. He’s speaking about the Farrah Phenomenon. Farrah Fawcett, that is.

While Farrah frenzy died out by the mid-’80s, Stovich, a hairdresser, reclaimed the excitement of his youth when he came across a buried treasure while cleaning out his old bedroom: an oversize Charlie’s Angels poster, worn with age but still hip, cool and sexy. The collecting started there, Stovich says.

When friends visit Stovich’s Yuba City home for the first time, they’re blown away by his collection. Some think it’s crazy, others find it impressive. More than anything, though, Stovich says, people my age remember their childhood, pointing out toys that they had or that they wanted, amazed at stuff that they didn’t even know existed.

Ever since he was a kid in the 1960s, Stan Panenka fancied himself the world’s No. 1 Beatles fan. But it wasn’t until the late ’80s that he decided to prove his passion for the Fab Four. For more than 20 years, Panenka has been amassing a collection of American-issued Beatles records judged by veteran record dealers as the finest in the world.

What makes his 320-item collection so stellar? The former computer analyst cites his own meticulous pursuit of authenticity and quality. Although many collectors would jump at the opportunity to add a sought-after title to their collection, I would buy only near-mint or better examples, Panenka says. It’s very hard to sell me a record.

Panenka doesn’t display his collection in his Sacramento home. Because of their exceptional quality and high value, his records spend most of their time in a bank vault. His favorite item? A highly valuable, still-sealed, first-state stereo edition of the Yesterday and Today butcher cover album&emdash;one of only about 10 such copies in existence.

Dealers and collectors put the worth of Panenka’s collection at more than $1 million, with some individual records worth more than $100,000.

To Paneka, of course, it’s priceless.

Why, then, would he want to sell it? I’d like to buy a dream home for my dear mom, who is 88 years old, Panenka says. She’s the best mom in the world, and she deserves it.

Insisting that the whole collection go to one person rather than selling off individual items, Panenka has been looking for the right buyer for more than a year. There will never be another Beatles record collection quite like it, he says. It would be a crime to break it up.

The Sacramento River Cats are not, as some assume, the first professional baseball team to represent our fair city. As far back as 1886, the Sacramento Atlas were battling it out on the diamond against teams like the Oakland Colonels, San Francisco Friscos and San Jose Prune Pickers. In 1903, the Atlas changed their name to the Solons and became a fixture in the California and Pacific Coast leagues until 1960.

Alan O’Connor can rattle these facts off the top of his head as easily as most folks can give you their address or phone number. Few people on the planet know more about the history of local baseball than O’Connor, an avid collector of Sacramento baseball memorabilia.

An administrator for the California Department of Aging, the 59-year-old Sacramento native has been collecting local baseball artifacts since the 1960s, when a retired Solons catcher and neighbor of the young O’Connor gave him one of his old baseball cards. Since then, O’Connor’s collection has grown to more than 1,000 items, including baseball cards, photos, signed baseballs, game bats, uniforms, programs, pennants, decals and just about any other baseball-related object you can imagine.

O’Connor even owns seats from the original Edmonds Field, home of the Solons. The ballpark, at Riverside Boulevard and Broadway, was torn down in 1964. Seats are some of the only artifacts that remain.

In 2005, the River Cats played host to the Pacific Coast League all-star game. To honor Sacramento’s rich baseball history, O’Connor’s collection filled the McClatchy Gallery of the Old Sacramento Discovery Museum. Due to its popularity, the collection remained on display for almost a year.

Decades before becoming governor of California, Arnold Schwarzenegger took America by storm with his audacious personality and rippling physique. A young Randy Jennings&emdash;11 years old, without a father figure and skinnier than a sapling&emdash;looked up to the bodybuilder-turned-actor as a god.

Now, 25 years later, the Austrian Oak holds court at the Capitol. And what of Jennings, the rawboned youth? While he hasn’t been able to bulk up his still-slender body, the Citrus Heights freelance illustrator has managed to gather the largest Schwarzenegger memorabilia collection in the world.

Don’t think that Jennings’ impressive collection has escaped the governor’s notice. Jennings and Schwarzenegger have met on more than 20 occasions, including for interviews for the Schwarzenegger fan site, thearnoldfans.com, that Jennings runs. In fact, to celebrate the 10th anniversary of the website, the governor wrote a letter of congratulations to Jennings and the website’s staff. Jennings calls the letter the most treasured item in his collection.

How do Jennings’ loved ones feel about his love for the Governator? Naturally, my wife thinks it’s silly and a bit nerdy, he says. I can see her point. It is silly. My mom is very proud of it, however, calling the collection my â€˜retirement fund.’