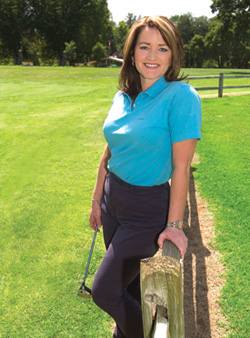 This Pulitzer Prize-winning journalist knows how to uncover the secrets of Sacramento, but she was reluctant to reveal her own summer sanctuary.

“My favorite summer spot is the American River. It is my favorite spot fall, winter and spring, come to think of it,” says Marjie Lundstrom. “Near William Pond in Carmichael is a place we call ‘The Falls.’ It is a secluded spot where the river suddenly tumbles over this natural waterfall.

“My husband, Sam (Stanton, a fellow Bee writer), brought me to this place years ago, when he discovered this area walking his dogs,” says Lundstrom. “The first time I went there, I couldn’t believe we were in an urban area. It is the absolute middle of the city and you’d swear you were in the mountains. It was so peaceful and so lovely. We’ve kept coming back. We finally decided to leave downtown living and bought a home out there.

“Each season is different, but I like summer the best. The shoes come off, the toes go in. It is the best place in Sacramento to teach our kids (Riley, 5, and Nicholas, 10) to skip rocks, throw a stick in the river for the dogs, curl up with a good book or do nothing, like I like to, and soak up the serenity. That’s my place.”

Abbott Dutton, News Anchor and Anchor of “Good Day at 9” on UPN 31

This early-morning anchor wakes up by 3:15 and is on the air at 5. That kind of schedule limits your nightlife, but it can improve your golf game.

“I like to golf early and often on Sacramento’s many great golf courses. The best part is even if I ‘sleep in’ on the weekends, I can still make it to the golf course by 6 a.m.,” says Abbott Dutton.

Haggin Oaks is very close to the TV station, but for a quick nine-hole game, she’ll go to Land Park.

This past year, Dutton shot her first hole in one. “I was at Champions golf course with my friend Marianne McClary. On hole 7, she gave me the wrong yardage. She told me it was 90 yards when it was 111. I used the wrong club, my eight iron, aimed too short and got a hole in one. It was a fluke.”

Since that day, she did adjust her game and club choices, and dropped five strokes from her handicap.

“I went back there the next week. I didn’t have the same luck,” says Dutton, “so I haven’t been back there since. Just to get a hole in one is one in 80 million. I’ll probably never see it again.”

But she has a memento. “Marianne made me a little shadow box with the golf ball, scorecard and tee for my birthday,” says Dutton. “The scorecard that shows I got a hole in one. On the hole before I got a 10.”

John Alston harbors a dark secret. He’s an addict. His sad tale is the stuff of movies of the week.

“I came out here in 1996. I found Sacramento by accident, but fell in love with it,” says Alston. He worked at Channel 31, but when the station stopped doing news, he needed a new job.

“So I ended up in Philadelphia where they have something called ‘water ice.’ It is like a snow cone, but not like this junk where they put syrup on it. It’s like a really good slush puppy. I just became addicted to it,” admits Alston. “After I finished stories, I would go for one.”

After three years, he decided to return to Sacramento, but he still needed his fix. He found a new dealer: Merlino’s Freeze (3200 Folsom Blvd., 916-731-4000). Merlino’s is a Sacramento institution that started in 1946. Today, Merlino’s freezes are a regional favorite that also are sold at Raley Field.

Shockingly, Alston eats the freezes in public. He has refused to join any 12-step program to help him stop. He remains at large.

Diamonds may be a girl’s best friend, but for Joe Getty, it’s baseball diamonds. The season comes alive for him when the boys and girls of summer step onto the field.

“My favorite summertime spot is standing at the door of the dugout of the Eastern Little League field in the El Camino area that I coach in,” says Getty. “I’ve been coaching my whole life since I was a kid. I’m head coach for my son’s baseball team and assistant coach for my daughter’s softball team.”

Caitlyn, 11, is an outfielder and Declan, 9, plays second base. So far, neither of his kids has taken his former spot on the pitcher’s mound. “I hate to be a guy who relives high-school glories, but I was a pretty good pitcher,” says Getty.

When he’s not coaching, he’s at Raley Field. “There’s nothing I love better than sitting behind home plate at a River Cats game,” says Getty. “I love studying pitchers and what they throw and why they throw it. I’m never bored for a second. The baseball is tremendous, the seats are cheap, the beer is cold, the hot dogs are delicious.”

The two experiences are totally different for Getty. “As coach, I just want the kids to have fun and get more confident,” says Getty. “As a fan, I’m much more critical and analytical. It is a thinking game. Baseball is smashing something as hard as you can with a club and out-thinking the other guy at the same time. It is chess and violence.”

While Armstrong scarfs down the British omelette with bangers and sharp cheddar cheese, Marcy favors the olallieberry scones with Devonshire cream. “They are just unbelievable,” says Armstrong.

Then to walk off their meal, they’ll stroll around the park at the Capitol when the flowers are in bloom or take their dogs, Bogart (a mixed-breed from a local animal shelter) and Doodle (a springer spaniel), to Paradise Beach on the American River.

To close out the evening, the couple would seek out their favorite entertainment at The Palms in Winters (13 Main St., 530-795-1825). “It is one of the most popular music spots around. They play a little bit of everything. We go every time Mumbo Gumbo plays,” says Armstrong. “But I don’t dance, definitely not.”

Summertime evenings are the perfect time to relax for this news anchor.

“On hot summer nights, there’s a place my best friend, Ruth Angrisani, and I go after we’ve put our kids to bed,” says Marcy Valenzuela. “A little restaurant in our neighborhood called Vientos Mexican Grill (7600 Greenhaven Drive, 916-391-9670). We’ll meet there for iced tea on the patio. Maybe split some nachos.
“It’s good to have a little decompression time with fellow moms, a little getaway. We take our cell phones with us in case of anything so we can come back,” says Valenzuela.

Every summer, Valenzuela will take her daughter, Marisa, 5, to the Sacramento Zoo (3930 W. Land Park Drive, 916-264-5888) “She spends a lot of time with flamingos. She really likes those and the giraffes,” says Valenzuela. “There’s no elephant, which is a big disappointment for her.”

But for this desert Southwest native, her favorite place is her back yard, baking in the heat.

“I live for the heat in summertime,” says Valenzuela. “I dread doing the Blue Canyon live shots in the winter. When they send me out there, I look like I’m going to die. I’m not used to the cold at all. If Sacramento magazine does an ultimate guide to winter, I’m the wrong person to talk to. Count me out.”