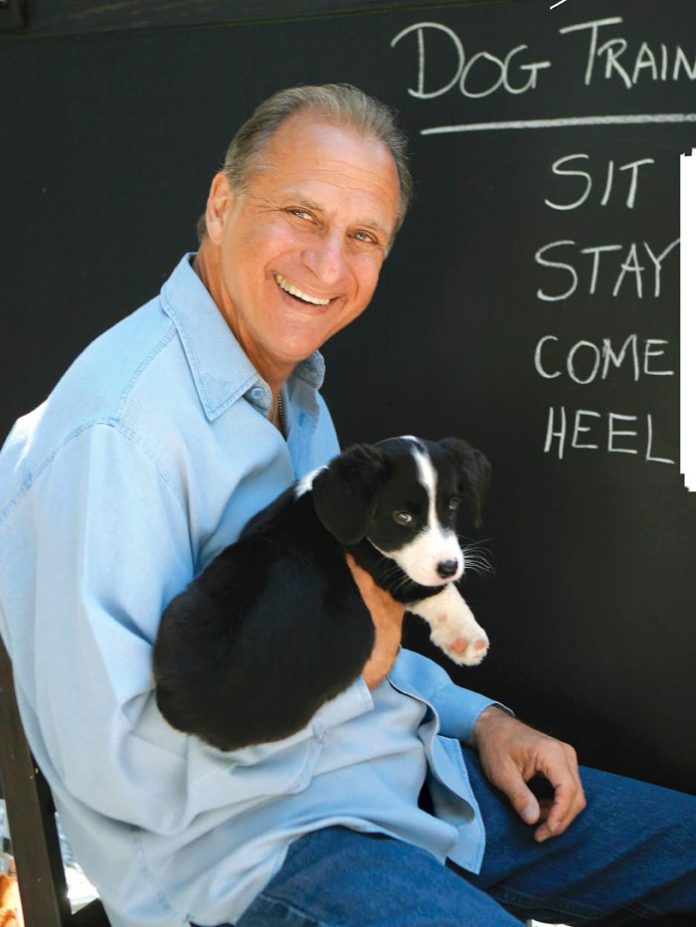 pawspective. And he can teach you to do the same.

But this dog whisperer doesn’t actually whisper; he communicates with his pupils in his trademark dogeese: baby talk delivered at high pitch.

Margolis has been training dogs since 1968. He is the founding director of the National Institute of Dog Training in Los Angeles and the co-author of 18 books on dogs and dog training. He has appeared on radio, and public and network television, including spots on Good Morning America, CNN, 20/20, The Tonight Show With Johnny Carson and Late Show With David Letterman, proffering sagacious advice for exasperated pet owners everywhere.

(He doesn’t train and tell, so don’t bother asking.)

But he will share tips: Yelling at a dog is abuse. Don’t use food as a reward. Never say the dog’s name with the word no.

The education can be eye-opening, even embarrassing. As a puppy, our collie mix actually thought her name was NoBear. And as for yelling? I spend most Sunday mornings chasing the dogs around the backyard in my nightgown with the first thing I can grab&emdash;a guitar&emdash;screaming, Quit howling! We don’t live in &%$*@# Arkansas!

The science of dog training is precise. Good dog training, that is. Professional dog training. Example: Elvis, a glossy Doberman belonging to Elk Grove resident Michael Eudy, elegantly heels when Margolis steps out on his left foot, but not his right. (This is Elvis’ third training session.)

Margolis tells me to give the down command to Elvis. Down, I command.

The dog drops to the pavement.

Elvis’ owner, Eudy, booked Margolis for several training sessions because, he says, I wanted a well-trained dog. I wanted to enjoy this dog. I’ve owned dogs but never enjoyed them, he admits. He bought Elvis for the purpose of protection, so training was essential for that reason as well. But this dog&emdash;I have to say that, with the exception of my daughter&emdash;this dog is my greatest joy.

Christine Day’s teenage son brought home a stray he found wandering on a freeway in Chico. And as one would expect from anything rescued off a California freeway, the new addition to the Day family (which included another dog) had issues. When a family member would try to pet the dog while he was asleep, the dog would growl and even nip at the person who had roused him. Margolis spent time with the traumatized pooch, named Zeke, and discovered the key to how the Days and their dogs could all get along. Margolis suggested letting the sleeping dog lie and approach Zeke only while awake.

Margolis had other ideas about how to handle Zeke’s aggression, including keeping him in a wire crate&emdash;one that made him feel protected yet allowed him to see everything around him, where he would spend all his time when unattended. He’s a puppy, and just like with a toddler, I wouldn’t let him roam around the house if I left the room for even a second, explains Day. It works like a crib. If I leave the room, even to do laundry or whatever, I put Zeke in the crate.

Zeke also behaves better if Day keeps his leash on, even while he’s inside the house&emdash;another of Margolis’ suggestions. The leash seems to keep him in training mode, she explains.

With Eudy’s dog, Elvis, Margolis had been a bit more boisterous&emdash;he issued commands with enthusiasm. But with Zeke, he is much quieter; his voice is soft and calm. Come, Zeke, come to Uncle Matty, he calls to the dog (in the dogeese), and the dog does so happily. He sits obediently as Margolis strokes his head and&emdash;unbelievably&emdash;when he pulls back the dog’s lips! He then turns the dog’s head from side to side, examining his teeth. You want to do this often enough so that when your dog sees the vet, he isn’t traumatized by it&emdash;he’s used to it, Margolis explains.

Margolis insists on the best treatment for the dogs and is not afraid to tell their owners&emdash;directly&emdash;what he believes they need to hear.

I’ve had women calling me in tears because the husband doesn’t want to pay for training, and she loves this dog. I have to tell these women, you invest in things you care about. The wives will then tell their husbands, Ã¢â‚¬ËœI don’t want an anniversary gift, I don’t want anything for Christmas&emdash;just please, let’s train this dog so we can keep him.’

Born and bred in New York, Margolis has seen firsthand the strong bond that can exist between dogs and their humans: New Yorkers co-exist in famously cramped studio apartments with their canine companions&emdash;not just toy pooches that peer out of designer handbags, but big breeds, service dogs, retired police dogs. Margolis trained dogs there&emdash;where need was great and effectiveness was demanded (Housebreaking in New York is not an option, he explains)&emdash;then moved to Los Angeles in 1972.

I came here for an appearance on the Carson show, and was, Look! Oh, my God! Sun! Ocean! Open space! About five years ago, when he and his wife, Rose, were growing tired of the crowds and the traffic in L.A., he started scouting out other places to live. Someone asked me, Ã¢â‚¬ËœHave you ever heard of Placerville?’

He hadn’t, but he fell in love with the fifth home he saw in Diamond Springs: a spacious two-story ranch-style home with vaulted ceilings, sweeping views of Apple Hill orchards and a barn for their four miniature donkeys. (He uses dogeese with the donkeys, too&emdash;not donkeese. In case you were wondering.) As we approach the house, the dogs&emdash;three of them: a German shepherd and two corgis (Margolis has since added another corgi to the household)&emdash;announce my arrival with barking. Big barking. Lots of barking&emdash;considering they belong to a professional dog trainer. Hello!

But once we are seated inside on the couch, things quickly calm down. None jumps up on the couch after me, for starters. All three dogs are watching me, but not one approaches. No jumping, no incessant barking and none of that embarrassing sniffing, if you know what I mean. The pups&emdash;even the 100-pound shepherd&emdash;curl up next to the fireplace and remain there, the way they do in Pedigree dog commercials and Norman Rockwell paintings.

Among those people who surrender their dogs to shelters, Margolis believes that most (he estimates a shocking 90 percent) do so due to the dogs’ behavioral issues&emdash;issues that can be corrected with training. They’ll say, Ã¢â‚¬ËœThe dog has cancer’ or Ã¢â‚¬ËœWe’re moving and we can’t take the dog,’ but people don’t take their dogs to the pound for those reasons, Margolis says. The dog has made their lives unbearable; the problems have become so bad that the owner can’t take it anymore. Margolis says even animal lovers who put up with a pooch’s poor behavior aren’t doing the dog any favors and may be forced to put the dog down as a result. The amount of money pet owners spend on carpet cleaning and destroyed property; the number of dogs who run off the leash or out the door and are lost or killed by cars; dogs who nip at children and eventually bite one&emdash;and they will eventually bite one&emdash;this could all be avoided with professional dog training, he says.

I begin to tell him a sad tale about a family dog, selected carefully for its breed (golden retriever, because goldens are good with kids, right?). . .

I know what’s coming, Margolis interrupts me, but go ahead.

The dog was trained in a group setting and seemed well-behaved. But it nipped. Once, then twice. Finally, on a camping trip, left tied to a tree, the dog was greeted by a 4-year-old girl stooping down to give it a hug. The dog lunged at her, bit into her cheek just below the eye and ripped it clean off. The girl spent the day in the emergency room having her face stitched back together; the dog&emdash;centered in Christmas cards and family portraits throughout the years&emdash;was put down.

The second a dog shows a ten-dency like that, you need to have
him professionally assessed, trained and even placed in the right home,
Margolis says. Some dogs should not be in homes with children, regardless of breed.

No two dogs are alike, and it’s imperative owners analyze their pet’s personality, Margolis insists. Outgoing, shy, strong-willed, calm or aggressive, all are specific temperament types with unique behaviors that need to be assessed and addressed in training techniques.

Margolis’ services do not come cheap&emdash;about $295 per lesson, usually totaling about $1,200 to get the job done. I don’t think that’s such a huge investment when you’re talking about the life of your dog, he maintains.