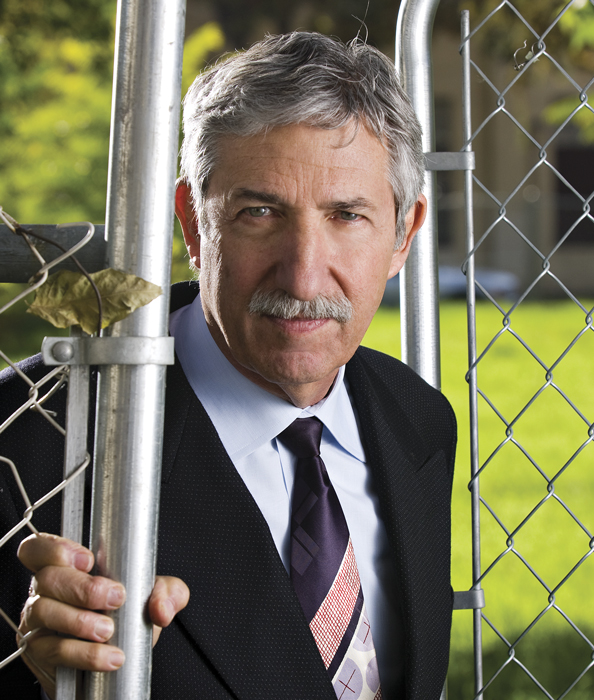 It’s early afternoon, and attorney Mark Merin is at his midtown law firm, sitting behind his desk, which isn’t so much a desk as a gigantic slab of redwood, sanded and polished so smooth it’s nearly a mirror. It is held aloft by twisted, gnarled branches that provide nooks for small masks and art sculptures. He is talking on the phone with a claims administrator, handling the disbursement of millions in settlement money won in Merin’s recent class action lawsuit against two procedures at Contra Costa County’s Juvenile Hall that Merin considers abusive.
“The first is called dipping,” Merin says after finishing the call. “They put the juvenile’s arms behind him and lead him down the corridor, then pull up on the arms, forcing the head down. But they lift so hard that they smash his face into concrete. This was done with alarming frequency. The second is called slamming, where they take a juvenile and physically throw him against the wall. It was so common, it was named. We want these things to stop, and the people who’ve suffered to be compensated.”

Jail inmates—especially those who’ve been strip-searched—are Merin’s legal niche. A civil rights attorney in Sacramento since the mid-1970s, Merin only rarely takes on individual clients. These days, he’s more often found traveling the country, looking for jails that conduct blanket strip-searches of inmates to sue in class action lawsuits—such as the jail in Nogales, Ariz., where Merin says at least 100 people con-tacted him alleging unconstitutional strip-searches.
“What’s wrong with a strip-search is they don’t distinguish between violent and nonviolent suspects,” he says. “The reason you do a strip-search is to find contraband (weapons). A blanket strip-search is unconstitutional.”
The courts have agreed, most famously in 2004 when they handed Merin his biggest victory ever—a $15 million settlement from the county of Sacramento over strip-searches at Sacramento’s Main Jail. Merin has won settlements for illegal strip-searches at the Sacramento and Contra Costa juvenile halls in 2007 and 2009, respectively, but the Main Jail settlement was the largest in the history of the Sacramento Sheriff’s Department. Merin’s firm won a $3 million fee award for the victory.
He also won accolades across the legal spectrum. “I think he’s a very competent counsel,” says Scott Jones, a Sacramento Sheriff’s Department captain and former department legal adviser who currently is running for sheriff. “I don’t always stand on the same side of issues as he does, but I certainly respect him for his beliefs and his willingness to fight for them. His strip-search lawsuit obviously had a huge impact on our operations. But he’s also literally changed the way strip-searches are conducted in the whole state.”
Merin, who’s made headlines for most of his professional life, earned more than a few this past August when he opened up a vacant lot he owns in downtown’s Alkali Flat neighborhood to homeless people. (Merin and his wife live just a few blocks away, in a 1905 house they’ve owned for more than three decades.) Thirty-five people promptly set up camp. After a neighbor complained that the crowd was causing him stress and health problems, Sacramento police officers moved in and swept everyone out of the camp.
For Merin, the actions of the Sacramento PD—and the city’s anti-camping ordinance, which prohibits anyone from “camping out” more than one night in the same place—are outrageous. “I have always been kind of anti-authority,” he says. “I like working with people who are genuinely oppressed.”
The homeless charitable organization Sacramento Loaves & Fishes, which came to know Merin in his lawsuit against the city of Sacramento’s anti-camping ordinance, considers him a champion of homeless people. “He and his wife have a genuine liking for people who are struggling, who are homeless,” says Joan Burke, director of advocacy for Loaves & Fishes, for whom Merin provides legal counsel. “He stands up for those who can’t stand up for themselves—people who’ve been forgotten by society or just aren’t held in high regard. And that’s the way we should all try to be.”
Others, like Sacramento Bee columnist Marcos Breton, aren’t so generous in their praise. “Merin has gotten rich suing cities, counties and law-enforcement agencies on behalf of downtrodden clients,” Breton wrote in an Oct. 18 column advocating “tough love” toward homeless people, and called Merin and Loaves & Fishes a “vocal minority” that has “drowned out” reason. “It’s not that these voices shouldn’t be heard,” Breton added. “They just shouldn’t be the dominant voices. It’s time for their 15 minutes to be up.”
In addition to trying to get the courts to change the city’s anti-camping ordinance, Merin is shopping a proposal for a permanent shelter facility that would include communal toilets and cooking facilities, job counselors, gardens and 60 Tuff Shed cottages. Called Safe Ground, it is modeled on Dignity Village in Portland, Ore., which Merin says has helped 11,000 homeless people find permanent housing of their own throughout the past decade. Yet Safe Ground, Merin laments, has no political support from the Sacramento City Council.

Merin wakes up at 6:30 in the morning. He reads The Sacramento Bee and The New York Times. He walks or goes for a run, then spends time with his wife, Cathleen Williams, who he’s been married to for 33 years. (The couple has two children, both grown.) “She is a counsel to the firm,” he says. “She will do some projects, if I twist her arm. But she is primarily a poet.”
Originally from Philadelphia, Merin earned his law degree from University of Chicago School of Law. He’s been a member of the California State Bar for 40 years. After moving to Sacramento in the mid-’70s to become prosecutor for the state’s Fair Political Practices Commission, he went into private practice a year later, offering pro bono legal services to as many community organizations as he could find. Because of laws granting big fee awards, successful civil rights attorneys can win big money—but they might have to lose nine out of 10 tedious and difficult cases to do so. “If you stop looking at yourself as being worth $300 an hour and start looking at what you want
to do, it makes sense,” Merin recently told a young law student considering a career in civil rights law. “You have to be prepared to live on little and work hard. We need more civil rights lawyers. But you get in it because you really want to do it.”
In 1984, Merin won more than $100,000 for a state park officer and his girlfriend who had been wrongly arrested by Sacramento sheriff’s deputies for being in a local park past 11 p.m. (closing) and refusing an officer’s directions. Two months later, he filed a suit in federal court saying that U.S. Border Patrol tactics were killing foreign nationals. Also in the mid-’80s, he successfully represented a female sheriff’s deputy who was hazed in front of prisoners at Sacramento’s Main Jail. He won a case in 1997 forcing Kaiser Permanente to stop stacking urgent-care appointments. And amid all his current strip-search lawsuits, he’s also fighting West Sacramento’s injunction against the Broderick Boys gang.
Why doesn’t Merin, who’s 66, just retire and let the next generation of attorneys take over his cases?
“I don’t know that there is a new generation coming up to do this,” he says. “People come out of law school with a lot of debt, and the first thing they want to do is pay it off. And retirement is kind of a funny thing. My dad used to say, ‘Why retire if you like what you do?’”

Why Sacramento: I got an offer to go to Sacramento when Jerry Brown was Secretary of State in 1975 to be the first prosecutor for the state Fair Political Practices Commission. I held the job for a year, but it wasn’t really for me. It was very slow and, I felt, not addressing problems in a substantive way. So I went into private practice.

Biggest Settlement: $15 million for the civil rights lawsuit on strip-searches of people at Sacramento’s Main Jail.

Worst Loss: A jury verdict against a family in Placer County who lost their daughter because a simple bacterial infection that could very easily have been treated with antibiotics wasn’t properly diagnosed. She got worse and worse and then died. She was seen by three doctors, but the jury blamed the mother for not getting her daughter sufficient care.

Proudest Accomplishment: Seeing my children, Maia and Noah, land on their feet and be healthy, happy people.