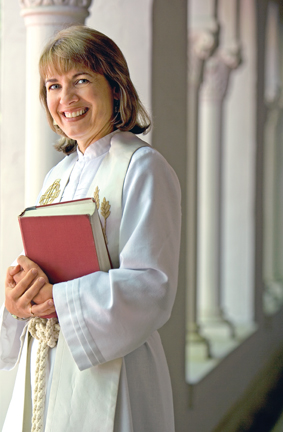 Heading up a religious congregation used to be a man’s job. No longer.

A generation ago, a woman in the pulpit was an anomaly in America’s houses of worship. But in the past decade or two, the stained-glass ceiling has begun to show some signs of wear and tear.  In the Sacramento region, female clergy have become increasingly visible. Nationwide, they make up nearly half the current candidates for the Master of Divinity degree (a steppingstone to ordination in several Protestant faiths), the Association of Theological Schools reports. That’s not to say that the shift has been seamless. One of the things we hear is that women are leaving the (Episcopal) priesthood more than men are because they are not able to find jobs, says the Rev. Marcia Engblom of St. Francis Episcopal Church in Fair Oaks. Fortunately, that’s not the case for Engblom and the other clergy profiled on these pages.

Presbyterian
Age: 52
Position: Pastor, Davis Community Church, Davis
Family life: Married; one son (age 18)
Background: Tobin has been active in the Presbyterian church all her life; she wrote a paper on female ordination while in college. Still, she says, it did not initially occur to her to become a minister. The only women I knew who went to seminary became Christian education directors, and I didn’t want to do that, Tobin says.
Call to ordination: It wasn’t until Tobin heard a Presbyterian woman preach in a style similar to her own that the pieces fell into place. She graduated from seminary in 1985. I think I’m a role model whether I want to be or not, and I need to pay attention to that, she says. Little girls in our congregation know that the pastor can be a woman as well as a man, and that’s important for me personally, because I didn’t grow up with that.
Rewards: What I have enjoyed the most has changed as the position has changed. What I’m really enjoying right now is the opportunity to help a congregation identify where God is leading it, and help us move toward that vision and see it start to come alive.
Challenges: Living a public life. It’s sort of a fishbowl existence, Tobin says, adding, What’s challenging for me is to have a community that’s not [made up of my] parishioners. Finding other places and other communities within Davis to be a part of, given the kind of work schedule I have, is challenging

Jewish (Reform)
Age: 37
Position: Senior rabbi, Congregation B’nai Israel, Sacramento
Family life: Married; one son (age 3)
Background: Alfi was raised in Laguna Beach by her grandparents. After she spent a college semester in Israel, Alfi’s interest turned from filmmaking to politics. She worked with the American Israel Public Affairs Committee in Washington, D.C., before deciding to become a Reform rabbi. Alfi left her post as associate rabbi at B’nai Israel three years ago to head up Hillel, a Jewish student center, at the University of California, Davis. She returns to B’nai Israel as senior rabbi this month. Alfi is a former chaplain of the California State Assembly.
Call to ordination: I wanted to be involved in people’s lives in a very real, hands-on way, and I felt I would be more effective doing so as a rabbi, says Alfi, who looks to the Rev. Martin Luther King Jr. and theologian Rabbi Abraham Joshua Heschel as inspirations.
Rewards: I get to interact with people in a very real way, at very ordinary moments. The things I get the most reward out of are things (many) people will never know: a counseling session, a study session.
Challenges: Saying no is the most challenging part. I get asked to do a lot of things. If I did them all, I would be a horrible wife and a horrible mother.

Episcopalian
Age: 52
Position: Rector, St. Francis Episcopal Church, Fair Oaks
Family life: Married; two sons (26 and 28)
Background: Engblom was raised in the Episcopalian church: Her father was a choir director and her mother an organist. She strayed after high school, returning as an adult to her family’s church partly in gratitude for parishioners’ support when she was dealing with health issues.
Call to ordination: While Engblom wanted to share her faith with others, the one-time substitute teacher says it took her several years to realize she was destined for the priesthood. My inward journeys continually affirmed what I was supposed to do, she explains. It was a long process of prayer and discernment . . . I drove my husband crazy.
Rewards: What I find really quite amazing about being a parish priest is the depth of congregational relationships that spring up faster than they would any other place in the world, Engblom says. People die, are born, have marriages&emdash;so many important things happen in the parish life that the priest is called to sit in on.
Challenges: Fiscal duties, such as fundraising and monitoring the church budget, are among her biggest challenges. Scheduling also ranks high, she says, given the practical demands of the job and what she calls the relationship-building aspects of clergy work.

Religious affiliation: United Methodist
Age: 66
Position: Bishop, United Methodist Church’s Californiaâ€“Nevada Annual Conference (includes the Greater San Francisco Bay Area, the Sacramento region and Northern Nevada)
Family life: Married; one stepson, one stepdaughter
Background: Shamana cites a divine nudge from God for steering her mother and the rest of the family early on toward the United Methodist Church. Initially a public school music teacher, she directed church choirs in her free time and was a lay member of the United Methodist Church’s Commission on the Status of Women. Ordained at 39, Shamana served as a pastor in Los Angeles and was elected bishop of the regional conference in 2000.
Call to ordination: I was slow to come to the feminist movement; racism was a bigger issue for me, Shamana says. But when I saw women giving communion, that helped me see a wider horizon. What I’d seen men do all of my life was possible for women, which said to me that there was more I could do in the church.
Rewards: Something that is really exciting and exhilarating about being a bishop is ordaining (new clergy), knowing that 10, 20 and 30 years from now these pastors are making a difference in children’s lives . . . that girls can get a bigger picture of what their lives can be.
Challenges: The whole world is in such a time of change. For me, the challenge is to help the church become a place that is open to all people. We preach about God’s unconditional love, but the challenge is helping the church really mirror what we preach.

Religious affiliation: Lutheran
Age: 38
Position: Pastor, Lutheran Church of Our Redeemer, Sacramento
Family life: Domestic partner; no children
Background: Even as a youth in the Midwest, Hartwig questioned the role of relevancy in religion. How does what’s happening on Sunday morning line up with what’s going on in the rest of our lives? she wondered. Hartwig moved West after college to teach high school government and economics and to coach cross-country track.
Call to ordination: While Hartwig played drums for her church in Bakersfield, women were excluded from certain leadership roles. When two female friends enrolled in seminary through the more liberal Evangelical Lutheran Church in America, Hartwig followed suit. I felt that leaving my faith at the [classroom] door wasn’t a good fit for me, says Hartwig, who also joined the ELCA. It was really a longing to be present with people in a community context.
Rewards: It is an honor and a privilege to get to lead worship, to get to preach, to get to distribute communion, Hartwig says. That is the heartbeat of our life in faith together, and that extends out into every area of our lives to the rest of the week.
Challenges: The greatest challenge for me is the diversity of expectations that we hold for clergy these days, says Hartwig, who, as the sole clergy to 130 church members, routinely juggles worship, counseling, youth ministry, administrative and a host of other duties. It used to be that a pastor in a town in Minnesota had a role that was not as broad.

Religious affiliation: Religious Scientist
Age: 61
Position: Pastor, Center for Spiritual Awareness, West Sacramento
Family life: Single
Background: Prescott was unchurched when she went to a Religious Science service in Santa Rosa to hear a friend in the choir. She quickly became a regular. The minister told us, â€˜You are whole, perfect and complete just the way you are now,’ says Prescott, whose faith is often mistaken for Scientology or Christian Science. No one had ever said that to me, let alone a clergy member.
Call to ordination: When Prescott witnessed the baptism of a young child, she was so moved that she decided to quit her job&emdash;two decades as the executive director of the Sonoma County Council on Aging&emdash;and enter the seminary. The congregation Prescott started from scratch eight years ago is home to 300 members.
Rewards: The thing that I like most about my job is helping people see the truth of who they are, Prescott says. She also relishes the diversity at the West Capitol Avenue church, which describes its daily devotion as the discovery of God within us and the revelation of our true spiritual nature and potential.
Challenges: There’s so much to do, and so little time.