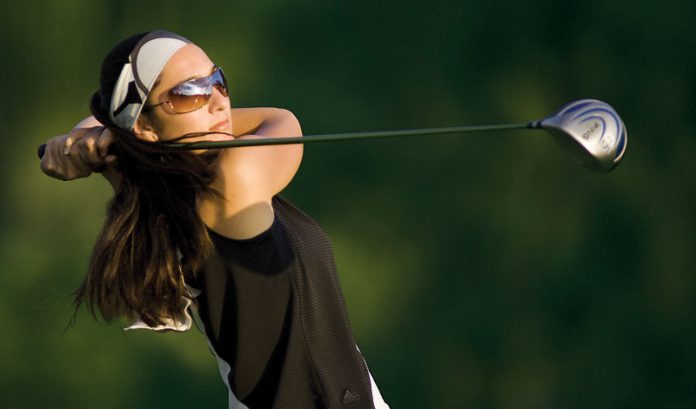 Sacramento native Kim Welch’s assertion is far from a boast. Rather, it is a polite answer to the question of where she expects to be 10 years down the road. And it’s hardly surprising: The 26-year-old has been at the top of her golf game most of her life.

The wins began adding up when she was a junior player at Haggin Oaks Golf Course, then later as a member of a highly talented St. Francis High School golf team, again as a winner of a remarkable 11 college tournaments to gain All-America status at Washington State University, and now as the champion of The Golf Channel’s popular golf reality series, “Big Break Ka’anapali.”|

As a child, Welch would have traded her sand wedge for shinguards in a goal-scoring minute, but her golf-adoring father thought otherwise. “I loved soccer, but my dad wanted me and my four brothers and sisters to play golf, at least until we were 12,” she reveals. Apparently, father did know best.

Known for wearing colorful scarves instead of a hat and for her prodigious 260-yard tee shots, Welch has played professional golf on the Duramed FUTURES Tour (the developmental tour for the LPGA) for three years and has dramatically improved her ranking every year, finishing 10th on the money list in 2008. “I’m very impressed with the caliber of play on the FUTURES Tour,” she explains. “I think any of the top 15 players is capable of playing on the LPGA Tour.”

At the time of this interview, Welch was preparing for the first stop on the 2009 FUTURES Tour. The self-described shy player would much rather be teeing it up in front of thousands than sitting for an interview—and therein lies the dichotomy of being a soloist when she is infinitely more comfortable as part of the choir.

Here’s Kim Welch, in her own words, on a variety of golf-related subjects.

I’m a public-course girl. I started at Haggin Oaks in the Little Linkers program at the age of 7. I didn’t really like golf but decided to stay with it to get a scholarship. I played golf at St. Francis, and we had dominating teams the entire time. That’s where I learned how to win.

I liked watching “Big Break” on television but didn’t want to audition. The whole thing seemed so invasive to a private person like me. Everywhere you turned, a camera would be in your face. A friend dragged the producers to where I was hitting balls, but I didn’t think they would pick me. The first day on the set was awkward. We were taped running on the beach and by the pool, and I wondered what I was doing there. But once I had a golf club in my hand, I was fine.

Amateurs try to hit it too far. Many people just physically can’t, and the only way they will ever hit it farther is to get properly fitted for golf clubs. They can easily gain yardage with clubs fit to their swings.

In my fantasy foursome, I would be joined by my dad, Jack Nicklaus and Tiger Woods. My dad idolized Jack and even named my brother Jack. I’d like to play with Tiger because I hear he’s pretty funny.

One of my best memories is when I won the ’98 San Francisco City. It was the first time I played in it, and my dad was caddying. I made it to the 36-hole finals and the match came down to the last hole and I made a putt to win. My dad looped 36 holes that day . . . and it was the only time he ever caddied! It was very special because he had started me in golf. Now my dad says he has a perfect winning percentage as a caddy.

To make the game more inviting, I would relax the dress code. I love the great traditions of the game, but I feel the dress code keeps many people away. They think it’s just a game to be played at country clubs, and that can’t be further from the truth.

I’ve been wearing scarves since high school but never as headbands. I wore them as belts, bracelets and everything else I could think of. I always wore a bucket hat when I played but thought I needed a change when I turned pro. So since I had all these scarves around, I just started wearing them on my head.

I’m very proud that I was an All-American in college twice. The first time I made it because I was in the top 10 at Nationals and the second time I was actually chosen. I felt as though I had earned it throughout the year.

My parents inspire me. They inspire me to be a better person, to give more, to love more and to appreciate more. In a materialistic society like the one we live in today, my parents have kept me very grounded and grateful for everything that comes my way. I’d love to be like them—loving, humble, supportive and appreciative.