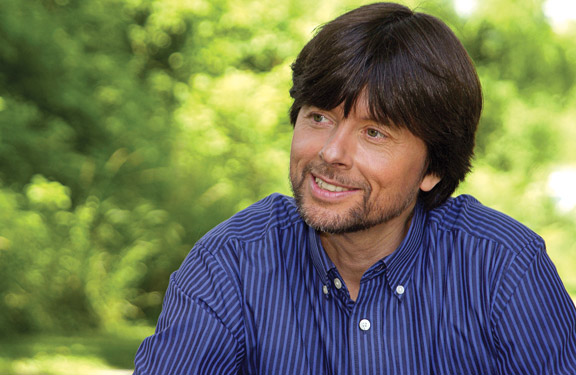 Training his eye on World War II, the famed documentary filmmaker uses the stories of 12 Sacramentans to tell essential truths about the nature of war.

This month, Sacramento will play a starring role in the new Ken Burns documentary, The War, which begins airing Sept. 23 on PBS.

In the seven-part series, Burns looks at the history and horror of World War II through the eyes of ordinary Americans in four geographically distributed towns: Mobile, Ala.; Waterbury, Conn.; Luverne, Minn.; and Sacramento.

The filmmaker interviewed a dozen Sacramentans, including Burnett Miller, a member of a prosperous Sacramento family who served in the 11th Armored Division and fought in the Battle of the Bulge; Jeroline Green, a Kansas native who went to work as a clerk at McClellan Air Force Base and married a serviceman;
and Susumu Satow, a Japanese-American who was forced into an internment camp and later fought in Italy and France as a member of the 442nd Regimental Combat Team, a highly decorated unit composed almost entirely of Japanese-Americans.

Burns, who made the acclaimed documentaries The Civil War, Baseball and Jazz, talked to us by phone from Los Angeles, where he was promoting the series at the Television Critics Association’s summer press tour.

Why Sacramento?
We wanted to pick a West Coast town that most viewers had no strong associations with. Los Angeles, Seattle, Portland and San Francisco had too much baggage&emdash;people know them too well. Sacramento was perfect for us.

How’d you find your Sacramento interviewees?
We came to town and the Bee ran an article on us. We reached out to veterans groups and historical societies. One contact led to another. We did what any good investigative journalist does and pursued the leads.

Tell us about the 12 people from Sacramento.
We weren’t actually looking for diverse ethnicities with the exception of Japanese-Americans&emdash;we wanted to tell about their terrible experiences with internment and about how they were recruited to serve in the war. After classifying Japanese-American citizens as enemy aliens unfit for military service, the government reversed itself and recruited them for front-line duty in Italy and France. They ended up in the 442nd, which was the most decorated unit of its size. We interviewed three people from Sacramento who served in that regiment.

It sounds very dramatic.
Imagine this: You’re an American citizen. Your home and your livelihood are taken away from you. You’re placed in an internment camp. Then you’re recruited by the Army and you serve with great bravery. That’s a hell of a good story.

Tell me about an interviewee you found interesting.

We interviewed Burnett Miller, your former mayor. His descriptions of Sacramento before the war, and then all the way through the liberation of the concentration camps, were incredible. He was extraordinarily honest and dramatic. He’s a great storyteller and a fantastic human being.

How many times did you come to Sacramento?
Two or three times. But my crew has been there many, many more times than that. The last time I was there, it was on a perfectly lovely day, when the rest of the country was suffering from snowstorms. We had a great time.

What do you think Sacramento viewers will find most compelling about the series?
We’re showing an aspect of war that’s never been shown. We weren’t interested in celebrity generals or strategy or armaments but in the emotional resonance of individual stories. People in your city will be drawn not just to the Sacramento stories but to all the stories.

Why did you choose World War II as the subject of your latest project?
After I made a film on the American Civil War, I assumed I wouldn’t get into war again. But we’re losing more than 1,000 American veterans a day to old age. Kids are growing up not even knowing what we fought for. I had to do this story now, before it was too late.

Any parallels to today?
This series isn’t at all political. But if you reveal the real nature of war, it will remind people what war is all about. I think people will find parallels in this series to the war we’re in now. That’s just the nature of war.