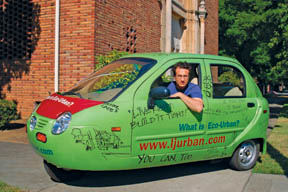 A: The ZAP Xebra that midtown eco-urban development firm LJ Urban uses as a company car&emdash;er, vehicle. It’s 100 percent electric, zero-emission and costs pennies per mile to use, says LJ Urban partner Jason Presley. The elongated, egg-shaped NEV (neighborhood electric vehicle) plugs into a 110-volt outlet and, after about eight hours, is good for 40 miles or so. Top speed is 40 mph, which keeps it off the freeways, but it’s plenty fast for cruising midtown and stirring up interest in LJ Urban’s green-building ways. It’s really great, Presley says about the Xebra. People ask us about it all the time. In fact, the NEV is adorned with go green slogans scribbled by fellow eco-urbanites. It’s part of our message about what we do, Presley explains.

LJ Urban’s first eco-urban community, B Street West, is slated for West Sacramento, where plans have been approved for 35 two- and three-story homes with low-VOC paints, nonformaldehyde cabinetry, tankless water heaters and efficient use of precious urban acreage. Three- and four-story homes are planned for Sacramento’s Newton Booth neighborhood at 27th and V. It’s very high-density: 32 units on less than an acre, Presley says. Interior features will be every bit as green as B Street West&emdash;probably greener. Every project we do, we’re trying to push more and more green, Presley says. We’re learning all the time.