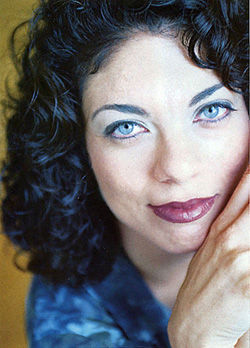 Joey Garcia stood at a crossroads.

It was the early 1990s and Garcia’s life was giving new meaning to the term “multitasking.” The young public relations professional was juggling full-time, part-time and free-lance work, including writing jobs for Sacramento magazine, with volunteer work, assorted activities and commitments to a husband, a home and a host of friends. It was a full life, but less than fulfilling.

Then, there were the unusual experiences she was having—odd coincidences, eerie premonitions, dreams dense with indecipherable symbolism—that prompted an incredulous Garcia to question her own sanity.

Something was going on inside of her that she hadn’t taken the time to understand. She could continue on this same path or take a different turn.

“I decided to follow the muse,” recalls Garcia. She quit her jobs and went on sabbatical. “I didn’t know it was God calling me. I thought it was the muse.”

The “muse” would lead Garcia on a journey toward a new understanding of herself and the world, and a new life purpose dedicated to assisting fellow travelers on the spiritual path.

Today, Garcia is inarguably Sacramento’s first lady of spirituality. At 41, this smart, stylish, centered woman wants to engage us in conversations about spirituality and encourage us to rekindle our relationships with God. And she does so in a manner that is accessible to nearly everyone—be they devout, in doubt, or still seeking. l  Garcia is perhaps most widely known for her weekly advice column, “Ask Joey,” which has graced the pages of the Sacramento News & Review for more than four years. Her column attracts readers with its wit, wisdom and a nondenominational dose of the Divine. A devout Catholic, Garcia puts a spiritual spin on her straightforward answers and references the BhagavadGita as readily as the Bible. When an angst-filled reader recently “asked Joey” what else could be done to relieve a life “that’s been nothing but pain,” Garcia offered this Buddhist-inspired thought: “Suffering must be welcomed when it appears because it is a guide to our authentic self. . . . Remember that your choices contributed to placing you where you are. That also means you have the power to change your life.” l  Garcia maintains she gets as much from writing the column as she gives. “I learn so much about myself and what I believe and who I can become by writing this column. I see every week areas where I can be more open and loving.” l  This sense of gratitude, of feeling blessed by all of life’s opportunities, seems to permeate all her endeavors.

In addition to being an advice columnist, Garcia is a certified spiritual direction counselor. She is founder and director of The Institute for Spiritual Companionship, an educational institute in midtown offering personal and spiritual development, and she publishes a magazine called Sustenance: The Magazine of Conscious Spirituality. She participates in a new consortium of complementary healers with the Sutter Center for Integrative Health and Healing in Davis, lectures here and in the Bay Area, and is finishing her first book, on divorce and healing relationships.

Garcia is like a seasoned traveler, eager to share with others the spiritual experiences, insights, tools and tips she’s gathered along her way. And she navigates the borders between belief systems with ease, respectful of individual and cultural interpretations of the Divine, while mindful of the core principles nearly  all religions share—to love God, your neighbor and yourself.

A supervisor once told Garcia that her special gift lies in “welcoming back the prodigal”—those who have left their faith and need help returning home. Garcia relates to them, for she was once a prodigal, too.

JoCarol Garcia was born Nov. 2, 1960, in the Central American nation of Belize, formerly British Honduras. An only child, at the age of 2 she immigrated with her parents to the San Francisco Bay Area where, early on, they  lived and worked in the rectory of a Catholic church. “I ate with the priests,” Garcia recalls.

She was raised a Catholic, yet like so many baby boomers growing up in the tumultuous ’60s and ’70s, Garcia rejected her mainstream religious upbringing, struggling particularly with the patriarchy of the Catholic Church.

Gifted in communications, as a young adult Garcia was a news anchor on several Bay Area radio stations. She studied journalism and government at California State University, Sacramento, but a successful stint at a Davis public relations firm soon sent her jetting about the country and landed her a management position in New Jersey with a Fortune 500 firm. After a two-year sprint on the corporate fast track, though, a homesick Garcia packed her bags and drove home.
Back in Sacramento, Garcia married her boyfriend and filled her calendar with professional and personal obligations. Her plate was full—overflowing—yet little on it seemed to nourish her.
Then, her inner voice grew louder.

“I started having really bizarre experiences,” Garcia recalls, “which I understand now as the awakening of my intuition. God is sometimes willing to do anything to get your attention.”
In one incident, on the eve of leaving for a trip to Belize, Garcia was overcome with “an overwhelming sense of dread” to the point of uncontrollable sobbing. Convinced they shouldn’t go, she and her husband traveled instead to New Orleans, then returned to the voices of anxious relatives on their answering machine—the cousin they’d planned to stay with had just been murdered.

Unsettled by such experiences and unsatisfied with her life, Garcia went on her sabbatical. “It was supposed to be a year, but then it extended itself as I began to see there was much more going on with me,” she explains.

She started looking at her own heritage. As is typical with Belizians, Garcia’s ethnicity is a mixture—Mayan, black, Welsh, Scottish and Honduran. Drawn to doing a “spiritual” rather than standard genealogy, she began studying the religions of her Mayan and African ancestors. Intrigued, she explored other religious beliefs and practices: Buddhism, Judaism, Ifa (a West African-based religion), ancient Celtic, goddess and various Christian religions, joining some along the way. She also became certified as a Hatha yoga instructor, a Reiki master therapist and a facilitator for The Work™.

A rumor began to circulate that she was giving readings. One woman was particularly persistent. “One day I ran into her and said, ‘I don’t do readings, but we can talk about what is going on.’ So we talked, and she started telling people” and Garcia began counseling people. “I didn’t have a sense of charging for my time,” she concedes. In exchange for her help, people brought food. “It was like living in a village.”

In the cleared-out inner space the sabbatical afforded her, Garcia’s intuitive abilities began to emerge and grow.

During this time of introspection, Garcia reconciled her issues with the Catholic Church: “What I was upset about in Catholicism was [a] projection of my own personal issues onto the Church. I had a discomfort with authority. . . . That journey of my leaving the Church and [exploring other] religions allowed me to see that the issues I had with the Church were always with me—they were my issues.”

Garcia then deepened her commitment to living a spiritually centered life by completing a rigorous, three-year program to become a certified spiritual director.  She trained at the Church-affiliated Mercy Center in Burlingame, Calif. The mission of a spiritual director, Garcia explains, is “discerning the direction of an individual’s spiritual path, companioning them back to God’s embrace and developing their relationship to God—however they name that.”

“I changed profoundly in my marriage. When I met my husband, I was this driven career woman—that’s who he wanted,” remarks Garcia. Although their marriage eventually ended, she and her husband “worked really hard to have a good healing through our divorce” and remain good friends.

Garcia cites “various disparities in her marriage,” especially in communication, along with spiritual direction and concepts from The Work™, as inspirations for her developing a set of “simple yet profound” techniques for achieving personal growth and spiritual healing.
In 1996, Garcia took a position with the El Dorado Women’s Center, where her boss, Claire Collingwood, was experiencing challenges establishing herself as an equal priority to her roles as wife and mother. Offering to help, Garcia “talked to her and started sharing these tools with her and she started to change.” As Collingwood worked with Garcia’s tools addressing “truth, self-care, self-knowledge and deeply listening to others and self,” people began noticing her transformation to such an extent that, according to Collingwood, “it became clear that [the tools] should be available to other people.” With her business background, she helped Garcia organize the tools into a training program, then an educational institute in 1998.

Garcia’s “How to Companion Yourself on the Spiritual Path” training program attracts participants of all ages, professions and religions. For $925, they meet one weekend a month for six months in a therapeutic group setting to learn and practice the tools, which incorporate such concepts as “radical truth,” defined as “transparency, the nakedness of letting nothing stand between you and your God and you and another person.”

The institute also publishes Sustenance: The Magazine of Conscious Spirituality, a quarterly publication with poetry and photography amid first-person essays offering “a deep exploration and questioning of spiritual matters.” Through the magazine, Garcia seeks to create a bridge between traditional and New Age religious thought, which involves greater understanding of the word spirituality.

“The word spirituality has . . . become a marketing hook intended to appeal to people who are uncomfortable with religion as they have known it. Rarely is it associated with what it truly means,” she wrote in a recent issue of Sustenance.