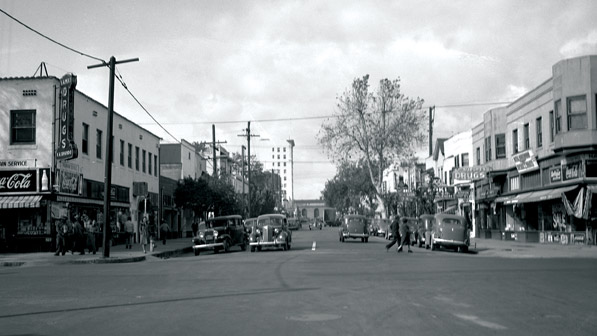 Rooted in segregation and undone by xenophobia, Japan Town had a challenging existence in Sacramento. The small community of immigrants and their descendants nevertheless managed a decades-long presence in the city, steady in its location and impressive in its self-sufficiency.

According to an unpublished manuscript written 20 years ago by city historian Katherine Gaeddert, about 100 issei (Japanese-born immigrants) had settled here by 1893, many farming in the Florin area. A 12-square-block Japanese quarter developed downtown, its hub on L and M streets between Third and Fourth. There, Yoshiru William Matsuhara was born in 1921.

Interviewed in 1990 as part of the Florin Japanese American Citizen League’s Oral History Project, with assistance from Sacramento State, Matsuhara said that as a teenager, he worked at the Nojiri Co. across the river. They used to take the heads off the strawberries, he said. They put them in a barrel and crushed them to make jam. They paid 25 cents a crate.

Gaeddert wrote that Japan Town, which had extended down to S Street, in its heyday contained dozens of boarding houses and hotels, 28 restaurants, 26 barber shops and, among many other businesses, three tofu makers. The Buddhist Church of Sacramento was founded in 1899 at 1221 Third St. and is one of the oldest such churches in the country.

Allan Hida, interviewed in 2000, said his father owned L&M Garage in the heart of Japan Town, next to a fruit store. I was infamous in that I used to purloin apples and bananas on occasion, recalled Hida, born in Sacramento in 1929. Those were the kind of things that I did in my younger days.

Japan Town was not immune to the debilitating effects of the Depression, as its population declined after peaking at around 3,000 in 1930. Imperial Japan’s Dec. 7, 1941 attack on Pearl Harbor inspired a domestic crackdown on Japanese Americans, and by mid-May 1942, no Japanese Americans remained within city limits. Most eventually were interned at Tule Lake, just south of the Oregon border.

Although they were allowed back in town beginning in January 1945, Sacramento’s Japanese Americans never completely regained the sense of community they enjoyed from the 1890s until World War II. In the late 1950s, a vast redevelopment project effectively wiped out Japan Town. By many accounts, Japanese
Americans were not fairly compensated for their property losses.

Japanese culture&emdash;both local and general&emdash;will be celebrated at the 60th annual Japanese Food & Cultural Bazaar, a free event Aug. 11 and 12 from noon to 9 p.m. at the Buddhist Church of Sacramento (located since 1959 at 2401 Riverside Blvd.). For more details, visit buddhistchurch.com