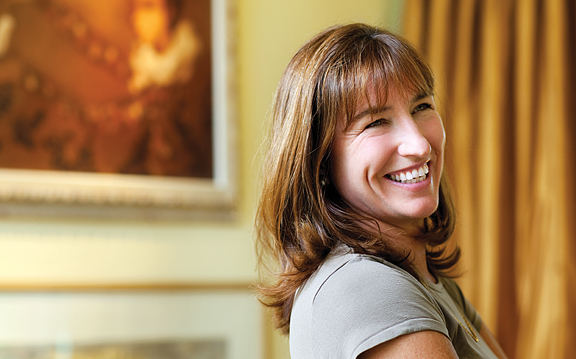 When local publisher Cecily Hastings and her husband, Jim, moved to East Sacramento’s McKinley Park neighborhood 20 years ago, she was a reluctant tuft of dandelion fuzz—a soon-to-be new mother who’d left behind a career in commercial interior design in the Bay Area only to find herself unmoored, unconnected, drifting alone. Her new neighbors, many of whom had lived in their stately, well-tended homes for decades, had grown old together and apparently saw little point in extending a casserole-laden hand to a newcomer.
It drove her crazy.

“It was devastating because I’ve always been a social person, and all of a sudden I was alone,” recalls Hastings, settling into a plush sofa (against the protestations of a displaced cat) in her tastefully appointed 33rd Street home across from lush McKinley Park, with its rose garden, duck pond, tennis courts and jogging path.

Despite living amid this residential Eden, Hastings continued to suffer in isolation until her son, Alex, started preschool and it became easy to make friends with other parents. Yet even that did not satisfy her—not entirely. Hastings was the kind of person who needed more than commiseration over tantrums and potty training. It wasn’t until a neighbor knocked on her door to solicit her involvement in a drive to slow traffic along H Street that she finally got her mojo back.

Along with that came a revelation. What this bit of dandelion fuzz discovered she’d needed all along—desperately—were roots. At last, here was a way to sprout some, and more importantly, an opportunity to create the optimum environment in which those roots could thrive.

Hastings jumped into the traffic-calming effort with a vengeance, and nothing’s been the same since. She went on to crusade (successfully) at City Hall against large celebrations at McKinley Park, where sometimes-reckless crowds threatened her neighborhood’s quality of life. She formed an alliance made up of several adjoining small neighborhoods as a socially connected alternative to a stodgy neighborhood association that had existed long before she arrived.

For the first time, neighboring enclaves that heretofore had shared little but boundaries could see what was possible when they banded together, and all because of a driven soul who didn’t think anyone had the right to sit at home and eat bonbons all day, not when each person had so much to contribute.

“If we could get people from each of these neighborhoods to get involved,” Hastings says, “then we could come together on the issues we had in common and help support each other. We didn’t have to fight alone.”

Today, Hastings, 52, is a seasoned community activist who’s parlayed her passion for neighborhood connectivity into a small publishing empire called Inside Publications, which she started on a shoestring in 1996. That this enterprise continues to exist at all in these economically damaged and socially fractured times—where iPods and Facebook take the place of picnics and quilting bees, and front porches sit empty as taillights slip furtively behind closing garage doors—is a testament to this one woman’s dynamism.

Never mind that newspapers throughout the country are in dire straits, that ink is fast becoming to news what vinyl is to music. With 14 full- and half-time employees (including Hastings’ husband, who handles the accounting) and a stable of about 20 freelance writers, Inside Publications and its three monthly tabloid newspapers—Inside East Sacramento, Inside Arden and Inside the City—are doing well.

The secret lies not in Hastings’ credentialed journalistic and publishing backgrounds—she had none—but in her preternatural instincts about what makes a community great and what people want to read about.

Says longtime friend and advertiser Polly Sanders, a local real-estate agent, “Cecily is always thinking about what would be a good story. She’s always got her antennae up.”

For Hastings, it all hinges on one essential question: What is a neighborhood made of? “Schools, parks, little kids, middle-aged people, seniors, small businesses, churches, transportation. A great neighborhood has all of those things,” Hastings says. “That has been the outline for the editorial plan of the newspaper.”

Indeed, Inside Publications’ newspapers, which average about 80 pages each, hit on every conceivable facet of community life. It starts with the cover, which is always a coffee-table-worthy color reproduction of a local artist’s work, and categorizes stories with icons depicting local volunteers, small businesses, sports, pets, home entertaining and spiritual life, to name a few—in short, good news rather than bad. Added to the mix are local politicians who write as guest columnists and a column by Hastings herself, which often is personal in nature with musings about everything from New Year’s reflections to her mother’s death a few years ago. Leading up to last November’s election, Hastings’ column created a stir when she endorsed Kevin Johnson for mayor, something she’d never done before with any candidate.

But she felt compelled to call it as she saw it. “I did extensive question-and-answer interviews with both (incumbent mayor) Fargo and Johnson,” she says. “After an hour with her, I could barely keep my eyes open. An hour with him and I was high as a kite.”

Not surprisingly, such blunt talk has landed Hastings on the sharp end of many a tongue, but she’s hardly the kind of gadfly characterized by the stereotypical crusty newsman of yore.
“She’s outspoken, with a strong personality,” Sanders says. “She has a strong belief system and the courage of her convictions. She does listen to people, but she doesn’t beat around the bush. You put all that together, and there are always going to be people who agree and dis-agree. Overall, she’s a very positive force.”

Just as successful as the editorial side is Hastings’ winning formula for a business model. The combined circulation of all three newspapers tops 56,000 a month, with more than 47,000 copies direct-mailed to neighborhood homes free of charge. The business not only is surviving, it’s thriving. As Hastings reported in a recent column: “Our best years ever in advertising revenue were 2007 and 2008, bucking the downward trend of most local publications. We did not anticipate this in 2008, when a major downturn in regional real estate was in full force. But other businesses took the place of our real estate advertisers as we ramped up the efforts of our four ad salespeople.”

Call it luck if you want to, but it’s been that way since the beginning. For Hastings, things just always have fallen into place. Perfect storms have always been the weather pattern as far as Inside Publications was concerned.

For example, Hastings probably would never have felt inclined to doodle around with desktop publishing had it not been for the advent of the PC during the early 1990s and her retired IBM executive husband’s insistence on getting one for their home.

And she never would have written for a newspaper in the first place if she hadn’t previously been involved with a neighborhood organization, which needed a writer for its newsletter.
That might have been as far as it went were it not for a man named Ken Mandler, former owner of Capitol Weekly, who in those days owned community newspapers in the Pocket area and Land Park.

“He wanted to move into East Sacramento, and someone gave him my newsletter,” Hastings recalls. “He then offered me the position as writer and editor of the East Sac paper.”
Had Mandler not decided to sell his community newspapers, Hastings might still be writing for him to this day. But she had a bold idea: Why not buy just the East Sac paper?

“He said, ‘Well, I already have a buyer. I’m selling the whole package. But you know all those ideas you kept pitching me that I always said ‘no’ to? Take those ideas. You’ve got everything you need to do this on your own.’ So I came home and told my husband, ‘We’re doing this.’ And he was very supportive.”

Hastings followed through, and gleaned some sage advice from Mandler along the way. She started small, selling $3,000 in advertising for her first issue, barely breaking even.
“Now we make 10, 12 times that every month,” she says.

Again, the fortuitous perfect storm was at work. It turns out that demographics in the East Sac area were the perfect mix for what Hastings was trying to accomplish. Residents were older and more well-to-do than most other parts of Sacramento, three hospitals in the area were major employment centers, and small businesses—bakeries, retail shops, restaurants, service providers—were sprinkled among the residences. What better way to put advertisers on the radar of their most likely customers than to direct-mail the information to customers’ homes?
“It never would have worked in Natomas or Elk Grove,” Hastings says.

Soon, businesses from other parts of Sacramento began to take notice, especially contractors and kitchen remodeler types who salivated over the grand old houses East Sac has in abundance. They wanted to advertise, too.

The next logical step was for Hastings to expand her reach, and thus were born Inside the City in 1998 and Inside Arden in 2000.

Although happy with her papers’ progress, Hastings has an eye on the future when possibly fewer people will be turning to the printed word. She’s already put Inside Publications on the web and plans to expand its online presence.

Yet the question of her publications’ relevance never keeps her up at night. Now more than ever, she asserts, people need to turn to their neighbors. “The one place you can actually get involved and make a change for the better is your neighborhood,” she says.