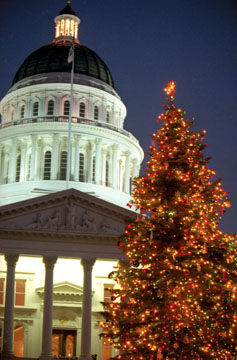 The Capitol’s Christmas tree has come a long way from its origins: as a prop for Gov. James Rolph’s office party in 1933.

Throughout the next several decades, fir fanfare continued to be fairly furtive. Some years, governors didn’t bother having an official tree. Following an extensive remodeling of the Capitol’s west wing, however, a large, decorated evergreen was placed in the rotunda in 1983. Under the guidance of Gov. George Deukmejian and his wife, Gloria, the enduring tradition of having a child with a developmental disability participate in the ceremony was initiated.

Two years later, the Capitol Christmas tree celebration was moved to the west lawn, where it has been ever since. Gayle Wilson, Gov. Pete Wilson’s wife, helped turn the event into a first lady-orchestrated affair. During the state’s energy crisis of 2000, Gov. Gray Davis&emdash;standing before what he called a holiday tree instead of a Christmas tree&emdash;ordered that the ornamental lights be turned on nightly from 7:30 to 11 p.m. only, as opposed to the previous 24/7 approach.

The annual tree ceremony exploded into a media circus on Dec. 9, 2003, a few weeks after movie star Arnold Schwarzenegger assumed the state’s top office. There was VIP seating for 300 people, and there were sharpshooters keeping watch from atop at least three state buildings, and Ninth Street was closed to traffic, wrote J. Freedom du Lac in the next morning’s Sacramento Bee. Randy Travis performed, Mary Hart served as master of ceremonies (the event was aired on Entertainment Tonight), and anti-Schwarzenegger protesters made their voices heard, all under rainy skies before star-struck eyes.

In 2004, Gov. Schwarzenegger restored Christmas to the tree’s name and in his remarks reflected on his youth in Austria. Musician Steven Stills was one of the late-afternoon ceremony’s other attractions.
Last year, a 55-foot-tall Douglas fir trucked in from El Dorado County was adorned with some 6,500 bulbs&emdash;by far the most ever&emdash;and about 2,300 ornaments, most made by people with disabilities. Hart returned to officiate at the Dec. 6 ceremony, whose entertainment included singer Dianne Reeves and songwriter David Foster. The tree was lighted nightly from dusk to 10 p.m. through early January.

This year’s Capitol Christmas tree coronation, on Dec. 5, again will be presided over by Schwarzenegger and his wife, Maria Shriver.

As has been the case since the mid-1990s, a giant (9-by-13-feet) steel, gold-plated menorah from Chabad of Sacramento also will be displayed this month on the Capitol grounds&emdash;at least through the eight-day period of Hanukkah, which begins Dec. 15. Rabbi Mendel Cohen said earlier this fall that he hopes Schwarzenegger will attend the menorah unveiling, which the governor has done the past three years.