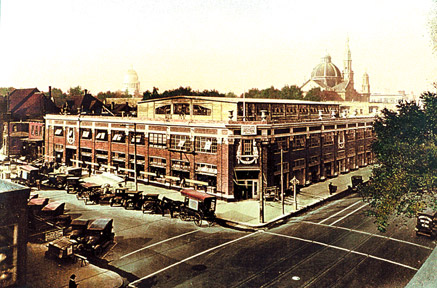 In its heyday, the Public Market was the food-shopping mecca for the entire city, says Sam Kamilos. The 76-year-old Carmichael resident should know: He grew up in Sacramento and as a kid worked for his family’s produce stand in the downtown building.

Designed by famed Hearst Castle architect Julia Morgan, the Public Market opened in 1923 at 13th and J streets. For 51 years, the place buzzed with food sellers and their customers. Afterward, the red-brick structure was an office building whose tenants included California’s Secretary of State. For the past six years, its restored facade has been the entrance to the Sheraton Grand Sacramento, a 26-story hotel across from the Sacramento Convention Center.

But Kamilos remembers when the Public Market was purely about food.

We had walk-in refrigerators to store our produce, but it was kept cool on the stand by using wet burlap sacks under various greens, carrots, beans, beets, etc., he says. The bananas came in large wooden tubs still on their original stalks, which we hung on hooks. We had special curved knives to cut â€˜hands’ of bananas off the stalks specifically to a customer’s order.

The customer did not handle the produce. They asked and we packaged. We would gladly take the time to comply with any special request.

Kamilos, an almond farmer and retired music teacher, can rattle off the Public Market’s 1940s tenants, among them a meat stand eventually run by his brother George; a poultry handler (Live chickens were slaughtered and cleaned on the site, Kamilos says), three delis (One, Henderson’s, featured a soda fountain-type spigot dispensing large glasses of buttermilk for 5 cents) and a bakery owned by Karl Jungel, a Norwegian whose so-called â€˜salt rising bread’ smelled like dirty socks when it was baking, but actually tasted very good.

In April 2001, the Sheraton honored the Public Market’s original occupants at its grand opening. Occasionally, people will come in and tell stories of the building when they were growing up, says Margie Starr, the hotel’s director of sales and marketing. Recently, a gentleman told of how he used to work for his grandfather stocking shelves so that he could earn enough to get an ice cream cone at the other end of the market.

Steade Craigo, a state preservation expert, was not impressed when the Public Market was re-imagined as a hotel lobby, two restaurants, a bar and a 20,000-square-foot meeting room. It’s a shame, he told The Sacramento Bee’s Tony Bizjak in May 2001. One could question whether that building is still eligible for the National Historic Register.